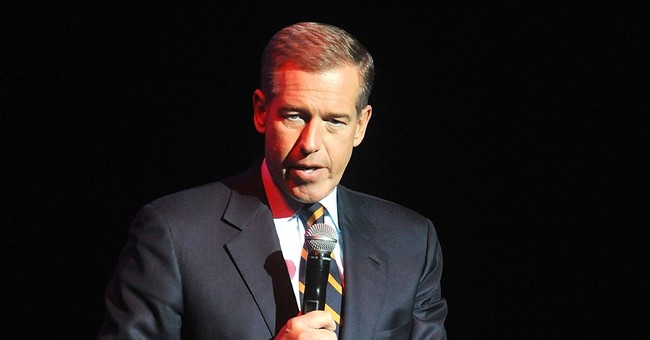 Trending
WASHINGTON -- On the vexed matter of Brian Williams my friend and colleague Wes Pruden raises a fundamental question. "Brian Williams, the tall tale teller for NBC News, has had a rough few days, but he's likely to survive," writes Wes. "He'll probably be back," Wes speculates, even overcoming the derisible endorsement of Dan Rather. Dan, your endorsement could be the kiss of death to poor Brian. Is there no reality-check on these egomaniacs?

My view is at variance with Wes's. He will never return to NBC Nightly News. Within a week of publicly apologizing for claiming to be on a helicopter that endured enemy fire in Iraq in 2003, Williams saw his ranking among America's most trusted public persons drop from 23 to 835, according to a leading research firm that gathers such preposterous findings for advertisers and marketing executives, the New York Times tells us. In six months his ranking will be in oblivion. The Times also tells us that Williams is "distraught," and "according to people close to him, [he is] telling friends that if he could go door to door and apologize to each of his viewers he would do so." I suggest that he start doing so, and after he has apologized to his last viewer he might return to NBC and ask for his job back.

The job will be gone, as will some management at NBC News.

After all, his showboating has revealed that people from the top down through the ranks at NBC were wise to his con and even supported it. He had become a hot property for NBC, and with all his self-promotion -- appearances on comedy shows and late-night talk shows -- he had, as they say on Madison Avenue, enhanced the NBC brand. As for his first mendacious stunt back in 2003, anyone who reads about it carefully today understands that there were more witnesses than nearby soldiers. There were NBC personnel on the ground and shortly thereafter there were NBC execs back in New York. They all were complicit.

What is more critical, his exaggerations and lies have cast further doubt on the whole media culture that we conservatives call "mainstream media." Dan Rather and now Steve Kroft of CBS are but recent dramatic examples of the mainstream media's decline. Ever since Spiro Agnew complained about liberal bias in the media back in 1969, conservatives have been wise to this bias. But in recent years there are more charges against increasingly flagrant political bias, shoddy professional standards, and the commercialization of reputations until a simple newsreader is treated, well, like a brand name. Why has Williams not marketed a line of men's underwear? Will Kroft put his name on a champagne flute?

The market for TV news has been declining for a generation. It became a hustle with a few exceptions. Conservatives have been wise to it for years. They see through its phony claims to objectivity. They deprecate its shoddy standards. They know mainstream media is not "their world." Fox News is their world, and if one Fox News journalist had acted as Williams has he or she would be shown the door in no time. If you want objectivity you watch Fox News.

Now other Americans are seeing through the pretentions of mainstream media, mostly Independents, which makes sense. A coalition of conservatives and Independents has come together in our recent "wave" elections and changed America. The Independent voters are more serious than the so-called Liberal voters or the Democrats. They are alarmed about bulging deficits and the kind of out of control spending that is in President Barack Obama's budget. They see events in the Middle East and realize that the world is a dangerous place. The evening news is no place for the grandstanding antics of Brian Williams.

His world is a fantasy world. Yet he is not the only one who lives with fantasies. There are more fantasists in the world of journalism than ever before. Remember Jayson Blair? Remember Stephen Glass? Yet the fantasists are not contained to journalism. Think of Hillary Rodham Clinton and her legendary landing under enemy fire in Tuzla, Bosnia in 1996. Or how about former Senator Tom Harkin on the campaign trail in 1992 and his war stories about combat over North Vietnam. Or recall if you will candidate Richard Blumenthal claiming falsely to have served in Vietnam when he never wore a uniform and won five military deferments between 1965 and 1970. He won his race for the Senate from Connecticut in 2010. Finally think of that serial liar Joe Biden claiming enemy fire forced his helicopter down in Afghanistan. He was forced down by a snowstorm.

Brian Williams may be finished with NBC News, but there is always a place for him in politics.