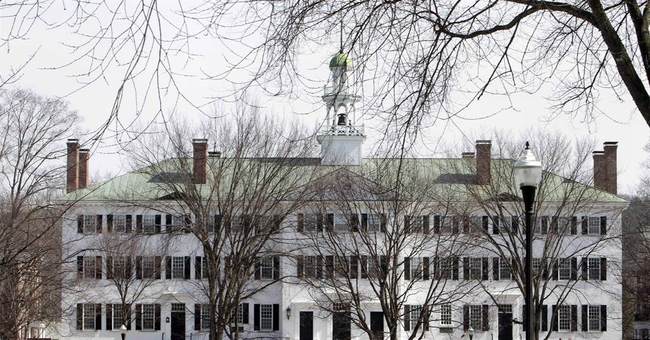 WASHINGTON -- Spring is in the air, and one senses that it is again time for the college students of the land to engage in protest. It all began in the late 1960s, and one of the legacies of that period is that the campuses are evacuated as soon as possible. By May, the student body will be vamoosing. Administrators have discovered that that soft, gentle, spring-like weather breeds discontent among the students, drunken carousal, violence and criminality. It is best to return the inmates to their parents.

An early sign of this seasonal discontent came a week ago at Dartmouth where a troop of students took over the president's office and delivered up a 72-point manifesto, which obviously took a lot of work. As Jillian Mayer, a senior, said, "None of those points are just thrown in there because we thought they should be there. People spent a lot of time building this Freedom Budget. I am not willing to prioritize certain things over others when all these issues work toward the same goal." Is she saying that the points are thrown "in there" because she thought they should not to be there? I am glad the president of Dartmouth has agreed to talk calmly and sensibly with Jillian and her cohorts. Possibly someone will suggest that she makes no sense.

The Dartmouth students -- actually a small minority of Dartmouth students with gigantic egos -- are demonstrating for quotas in racial admissions. They insist on mandatory ethnic studies for all students, though I will bet there is no WASP studies or even Italian studies for all students. The protesting students also want more "womyn or people of color" on the faculty, and according to the Wall Street Journal "sex change operations on the college health plan ('we demand body and gender self-determination'); and censoring the library catalogue for offensive terms." So far as I can tell they overlooked cosmetic surgery and liposuction. That might come next spring.

Again, it all started in the late 1960s. Then the causes of protest were such preposterosities as an objection to student grades and to dress codes, but also the Vietnam War and racial bigotry, which were at least plausible grounds for protest. Yet the war did prove to the communist world that its aggression could entail terrible costs, and we left Vietnam with the student protestors far from vindicated. South Vietnam is still not free. We did "give peace a chance" and there followed the "boat people" and "re-education camps." As for racial bigotry, much of it was ended eventually, and what remains now is a melange of prejudice held by bigots on both sides. Gratefully they compose a small proportion of blacks and whites in America today.

Now the protesting students at Dartmouth and elsewhere, urged on by the clement spring breezes, have elongated their list of complaints. Of course they are still concerned about race and ethnic issues, at least the ethnic issues of some approved ethnics. They have their feminist beefs, and the LGBT universe of atrocities -- sex change operations indeed! Possibly they will even rouse themselves to anger about the Vietnam War. Maybe they will insist we send B-52s over North Vietnam again.

Possibly the protestors will pause to reflect on this: They are paying roughly $65,000 annually to get an education, and very few traces of education are to be found in their 72 points. They may graduate from college uneducated. I recently Googled their counterparts from protests past. In yesteryear, protestors took over the offices of university presidents. They trashed university buildings. They uttered their manifestos. And they all shared a similar fate. Despite their enormous egos, they settled quietly into middle-aged mediocrity. Sure, they often damaged their universities, but they accomplished little else. Then, as the years stretched on they settled into oblivion, no one cared.