Saluting a “Great Charter” of Liberty 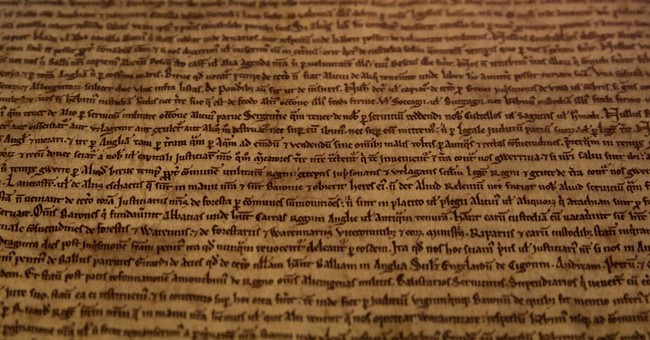 It won’t be long before Americans all across the country are celebrating our great national birthday. And we won’t do so quietly.

“It ought to be commemorated as the day of deliverance by solemn acts of devotion to God Almighty,” John Adams, our second president, wrote of July 4. “It ought to be solemnized with pomp and parade, with shows, games, sports, guns, bells, bonfires and illuminations from one end of this continent to the other, from this time forward forever more.”

Indeed it should. I also frequently urge people to reread our founding charter, the Declaration of Independence, which listed in detail our grievances with England’s King George III. Unless we remind ourselves from time to time why we established our country in the first place, we run the risk of esteeming the freedom we enjoy far too lightly.

It’s even more fitting that we do so this year, as we mark the 800th anniversary of another landmark document in the annals of liberty: England’s Magna Carta, which preceded our Declaration by 561 years.

In fact, the name, “Magna Carta,” means “great charter” in Latin, and how appropriate that it be called this, considering its role in curbing the excesses of tyrannical monarchs. Both King Richard and his brother-successor, King John, were levying crushing levels of taxation on their subjects and seizing property virtually at whim.

To help pay for his part in the Crusades, for example, Richard imposed the “Saladin Tithe” and other levies, which hiked the tax burden by almost 50 percent. It became incredibly expensive for land-owners to marry or inherit wealth. John made a bad situation worse, with compulsory labor and arbitrary seizures of cash becoming the norm.

Small wonder that the people eventually decided they’d had enough.

“Bled dry by two buffoons in a row,” writes Lawrence Reed of the Foundation for Economic Education, “the barons and dukes of England, with the support of just about everybody else, mustered the courage in 1215 to tell John where to get off.”

The resulting document, among other things, forbade forced labor and curbed punitive tax rates. It also stipulated that no man would have his property taken without “immediate payment.” It concluded:

“Wherefore we wish and firmly command that the English Church shall be free and that men in our kingdom have and hold all such aforesaid liberties, rights and grants, well and in peace, freely and quietly, fully and completely, for themselves and their heirs, in all things and in all places, in perpetuity.”

The “in perpetuity” part would be sorely tested in the ensuing years -- and continues in many ways to be tested today. There would be future fights to secure the rights of the people to be unjustly abused by those in charge.

“It is not for honors or glory or wealth that we fight,” declared the Scottish nobles in 1320 as they waged their own battle for independence, “but for freedom alone, which no good man gives up except with his life.”

But a watershed moment in the history of human liberty had occurred. Its lessons would not be lost on the men who drew up the Declaration of Independence and the Constitution. They, unlike so many of us today, knew their history. And they were determined not to see it repeated.

Their fight echoes down the centuries to today. We too face usurpations by those in power. Left unchecked, they would tax and regulate us into the poor house, and unjust seizures of money and property are more common than many of us realize.

The war for freedom, which must be perpetually waged by each generation, requires inspiration. May we never forget the role of the Magna Carta as we take part in this eternal struggle.