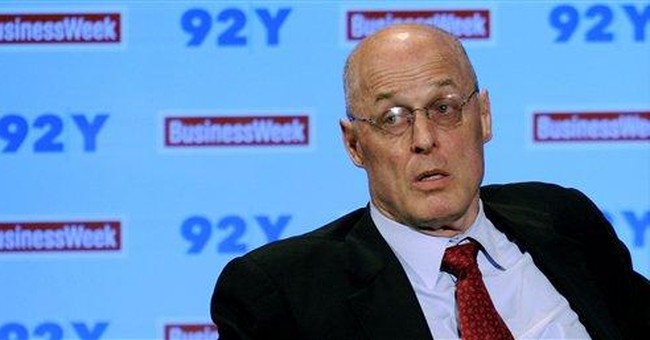 So much for checks and balances.

It looks as if the Bush administration intends to spend billions of dollars bailing out the American automotive industry. That announcement came immediately after Congress -- the branch of government that’s constitutionally required to deal with spending measures -- declined to intervene.

Treasury Secretary Henry Paulson wants to tap the Troubled Assets Relief Program, which Congress passed in October, and rescue car makers. But TARP was never intended to be a slush fund for the executive branch.

Back in the fall, there were reasons to be concerned that the entire global financial system was at risk. Storied investment firms folded; major banks were sold for pennies on the dollar; and Americans watched in horror as the value of our invested savings plunged day after day.

The government was supposed to use TARP to buy up troubled assets so our nation’s banking system wouldn’t collapse. The law gave Paulson $350 billion to use immediately, and authorized an additional $350 billion if necessary.

But Treasury decided not to use TARP money (about $15 billion of the original $350 billion hasn’t been spent yet) to buy bad assets, but on other approaches to the financial crisis. On Nov. 12 Paulson announced the executive branch would use TARP money to guarantee securities backed by student loans and credit card debt. The Bush administration also wants to refinance troubled mortgages and now plans to use TARP money to prop up the unprofitable segments of the auto industry -- in direct defiance of Congress.

It’s time for lawmakers to reassert their constitutional responsibilities and end the TARP program.

That’s not to say that our economy is out of the woods.

At this point, it’s still hard to tell a good investment from a pyramid scheme. Safe investments such as short-term Treasury bills are paying negative interest rates -- meaning many investors are so frightened to have their money out in the markets that they’re paying the government to hold on to it instead.

At the same time, it’s difficult for borrowers to obtain loans. Interest rates are historically high, and even banks are nervous about loaning money to each other. A new wave of collapses could well trigger another run on banks and generate another immediate financial crisis.

The best way to reassure the financial markets would be for Congress to reassert its authority. Lawmakers should tell the Treasury to stop using TARP funds. And if the executive branch indicates it plans to use the remaining $350 billion, Congress should block it.

Meanwhile, our country still needs an independent commission that can investigate the financial meltdown and explain what went wrong. This investigation should be non-partisan -- and complete its work swiftly.

And it’s not just corporate executives who should have to answer questions. Federal intervention in the mortgage markets, through government-sponsored enterprises Fannie Mae and Freddie Mac, certainly contributed to the rising tide of bad mortgages. Members of Congress should be asked whether they were swayed over the years by big contributions from Fannie and Freddie.

The markets may experience still more problems in the next year or so. But if lawmakers do decide at some point that our financial system is again on the verge of collapse, they should fashion a much more carefully defined response.

In short, it’s time to furl the TARP.