Time to Declare Victory in Afghanistan and Leave

D.W. Wilber
|
Posted: Feb 13, 2020 12:01 AM
Share   Tweet
The opinions expressed by columnists are their own and do not necessarily represent the views of Townhall.com. 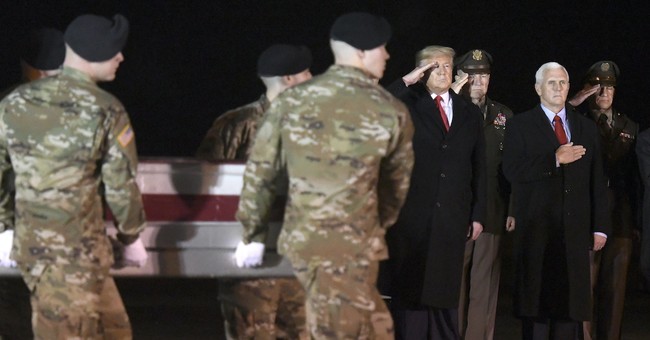 During his recent comments on Fox News following the deaths of two more American service members in Afghanistan, retired General Jack Keene was talking about it being in our national interest to continue to remain committed to keeping troops in that Southwest Asian nation.

I have a lot of respect for General Keene, I always pay close attention to what he has to say when he’s offering comments on anything having to do with national security. But on this point I can’t disagree with him more.

Yes, as he argued, the U.S. indeed has an interest in what happens in Afghanistan. We don’t want it to be reestablished as a terrorist haven any more than it already is. ISIS and Al Qaeda would certainly love to maintain and even increase their presence in that hellhole, and perhaps even establish another caliphate as they had in Syria, but this time in Afghanistan. We need to do what we can to prevent that from happening.

But we don’t prevent that by maintaining a military presence there anymore. Afghanistan will never become a stable Western-style democracy no matter how much blood and treasure we invest there. Probably not anytime soon will it even be a stable country, at least not for decades into the future.

Afghanistan has been involved in internal conflicts for centuries and any efforts to try to change the Afghans is doomed to failure. Too many other countries also have an interest in keeping the pot stirred up there, and they are enjoying watching the U.S. being bogged down.

As far as I’m concerned it is time for the United States to pack up and get the heck out of Afghanistan. We need to just pick an Afghan warlord to support and install him as ‘President.’ Pick one who will be the least detestable for us to accept.

Then we put him in power with the understanding that if he does much of anything we don’t really approve of, then there’s a Hellfire Missile with his name written on it. Tell him that he’ll end up being nothing more than a grease smudge on the ground over in Kabul, quickly forgotten by history, and very likely by his own family.

Then we install the next one who is waiting in the wings and allow him to stay in power until he too ticks us off. And then the next, and the next, on down the line. As often as we need to. After twenty years fighting and dying in Afghanistan we earned it. Afghanistan owes us mightily for all the American lives lost and maimed, and all the American treasure wasted.

We have the capability through technology to keep a close eye on what’s going on over there from the skies, and from many other methods as well. If we need to go back in from time to time for a very short duration in order to clean out a small enclave, then we can send in some U.S. contractors along with U.S. air assets to do the job. There’s plenty of former military Special Operators out there who would be happy to do the job and make a few bucks. Not to mention be able to serve their country once again.

A privately run QRF (Quick Reaction Force) that is trained, experienced, and ready to go in and do the job and then get the heck back out makes a lot more sense than maintaining a large U.S. military presence that continues to come under regular attack. From ‘friend’ and foe alike.

Defense and security expert Erik Prince offered some comments on this idea a while back, and it makes a lot more sense than staying in this endless war that is continuing to cost precious American lives.

So yes General Keene, we do need to be mindful of our national interests in Afghanistan. But we can do it in a much better way than continuing to squander American lives two or three at a time in a never ending conflict with no end in sight.

It is time to bring them home.