There Oughta Be a Law!

D.W. Wilber
|
Posted: Dec 02, 2016 10:03 AM
Share   Tweet
The opinions expressed by columnists are their own and do not necessarily represent the views of Townhall.com. 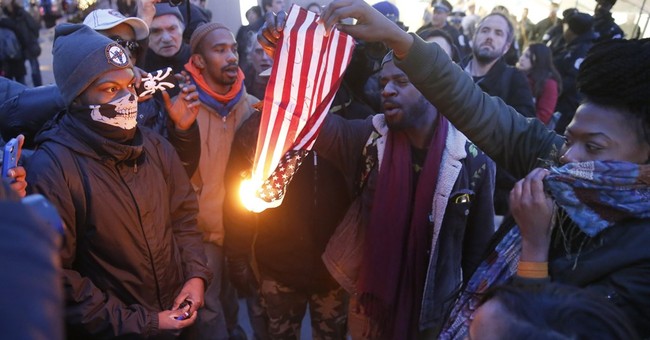 So President-elect Donald Trump says that there needs to be some consequences for desecrating our national standard, the stars and stripes, by setting it afire in some sort of meaningless protest. Certainly his opinion isn’t different from a great many Americans who share his sentiments.

After expressing himself it wasn’t long before the Democrats, the fraudulent news media, and an assortment of other America-haters flew off into a tizzy, declaring that Trump wants to clamp down on free speech and toss out the Constitution of the United States.

The same Constitution mind you that Barack Obama ignored for eight years. And Democrats and the fraudulent news media didn’t seem to mind it so much when Obama ignored that most revered of documents that was created over 200 years ago by our founding fathers. It was OK with them then for Barack Obama to pick and choose what parts of the Constitution he was going to follow.

But considering the clamor we’re hearing, one would think that Trump intends to undo America’s treasured First Amendment, and the right of American citizens to peacefully gather and protest.

In response to these protests I’ve heard the usual talking heads on television news programs argue that patriots have fought and died for the right of Americans to burn our flag, or for that matter to kneel during the playing of our National Anthem. Baloney!

I’ve served this nation for roughly 40 years, in peacetime and during war. And never did I think I was fighting for the right of some moron to desecrate the flag, to kneel down during the playing or the National Anthem, or to insult our nation in any other way.

The thought never crossed my mind that by serving the country and placing myself in harm’s way that I was doing so in order that someone with a beef against this country could be allowed to go out and torch our flag. I guarantee you I didn’t fight for that. And it simply ticks me off royally when I see or hear about it.

How disrespectful to those of us who have defended this country, and especially to those who have made the ultimate sacrifice on behalf of a grateful nation. Those who want to burn our flag have never been handed a folded one at the graveside of an American hero who died in service to America.

Yes, the U.S. Constitution may guarantee someone the right to do all manner of despicable things in the name of “free speech,” but that doesn’t mean that they have to. There’s no requirement to do something stupid simply because one can. And it doesn’t mean that I have to like it either. And obviously President-elect Trump doesn’t care much for it.

I recall once standing on a viewing platform in what was then West Berlin looking over a wall and a field of barbed wire, mines, and guard towers into communist East Berlin. As I stood there I remember thinking to myself that I wished all Americans could stand where I was at that very moment, in order to see the truth firsthand. If they had they likely wouldn’t think of striking a match anywhere near our flag.

While the news media, leftists on college faculties, and even some American politicians may express sympathy and even some level of respect for the former Cuban dictator Fidel Castro on his passing, they apparently do so out of some preposterous self-loathing they have as an American. Just like the flag burners.

Castro was no romantic revolutionary figure, as he is viewed by the idiots who walk around American college campuses wearing a t-shirt with the image of Che Guevara emblazoned across the front. Castro, like Che, was a brutal and psychotic murderer. Nothing to be idolized. The only suitable and appropriate place for the image of either one is in the bottom of a trash container, not on a t-shirt. And certainly not on an institution of higher learning that likely would not be allowed to exist as a place for the free exchange of ideas under a Castro regime. A free exchange of ideas is something that is anathema to people like Castro, and to those who burn our flag.

So I certainly don’t have a problem with the president-elect expressing his dislike of flag-burners in this country. I don’t like them either. And while they may have the right to do so as guaranteed by the U.S. Constitution, I understand what he meant and I agree with Donald Trump, “there oughta be a law”!