The ‘Rodney Dangerfield’ of World Leaders

D.W. Wilber
|
Posted: Sep 06, 2016 9:15 AM
Share   Tweet
The opinions expressed by columnists are their own and do not necessarily represent the views of Townhall.com. 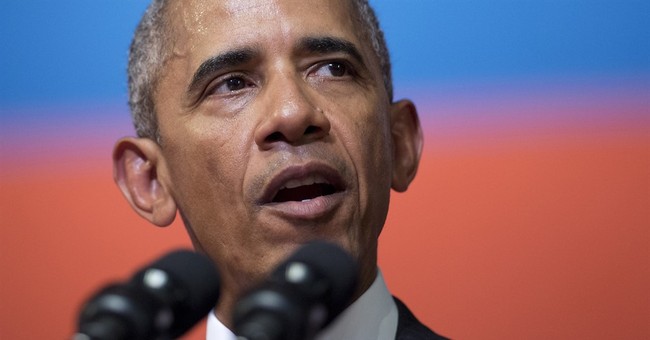 Most people can remember the late funny man Rodney Dangerfield’s stand-up comedy routines, as he stood on stage and adjusted his necktie, and then complained repeatedly about “getting no respect”.  He had the ability to make us laugh heartily at his comedic talents and self-deprecating humor.

His stand-up routine was a funny act to watch on a stage in Las Vegas, or perhaps a late night television talk show.  But unfortunately for us, Rodney Dangerfield’s act doesn’t play well on the world stage.

Considering the reception and treatment of Barack Obama during his nearly eight years in office, and in particular during the recent G20 Summit hosted by China, it would appear that the President of the United States has become the ‘Rodney Dangerfield’ of world leaders.

Barack Obama gets no respect from his contemporaries on the world stage, and by the Russian President Vladimir Putin in particular.  The Russian strongman seems to get enjoyment out of subtly, and at times not so subtly disrespecting his American counterpart.

The Russian press has also joined in mocking Obama regularly, and since the Russian news media is for the most part controlled by Vladimir Putin, the mocking and insulting cartoons that appear in Russian publications daily most certainly have the approval of the Russian leader.

It now seems that the Chinese as well are openly showing Obama disrespect, skipping the almost obligatory by protocol, ‘red carpet’ for arriving heads of state, and forcing Barack Obama to exit Air Force One from the rear end of the aircraft.  No red carpet, just an obviously intended insult directed at the American president.

Almost immediately after Barack Obama came onto the world scene following his election to the presidency back in 2008, other world leaders recognized that in reality he was an intellectual lightweight.  Nothing more than a community organizer, and someone completely in over his head when it came to dealing with complex and complicated diplomatic and national security issues.  In the seven plus years since he took office Barack Obama has done nothing to change the opinion of our adversaries, or our allies for that matter.

Think about it.  Terrorists kill journalists in Paris, France and Obama’s response is to send some has-been hippie folk singer from the 60’s to sing “You’ve got a friend”, instead of sending a flight of B-52’s on bombing runs over ISIS occupied territory.  He even lacked the diplomatic understanding of the optics - or was it simply that he lacked the guts - to go to France following the attack and link arm-in-arm with other world leaders in a solidarity march.

The Islamic Republic of Iran continues to show disrespect to the United States every chance they get, rubbing our nose in the fact that they don’t believe we have the strength of character nor the capacity to do anything about it.  Humiliating our Navy by taking sailors hostage and then humbling them in front of the world, and continuing to play cat and mouse games with our naval vessels in the Arabian Sea.  They simply have no fear of nor any respect for Barack Obama.

While at home distorted polls may show that people have a favorable view of him personally, the polls also show that they do not believe the United States is on the right path.  The path that he and his administration, including then Secretary of State Hillary Clinton, the Democrat Party’s nominee to replace Obama have put this nation on.  A path that leads to the continued perception of weakness by our enemies, and mistrust about our commitment by our friends in the world.

Sadly the disrespect with which Barack Obama is held by our enemies in the world may translate into adventurism on their part.  American interests around the world and our commitment to protect our interests may very well be put to the test before Barack Obama leaves office in January of 2017.

If Hillary Clinton wins the election there may be a brief postponement of any efforts by our enemies, since they won’t feel as though they have to rush to achieve their goals.  Hillary Clinton clearly is also viewed with contempt by many other world leaders.  Aside from being ridiculed and the subject of jokes in many capitols around the world, she simply is viewed as also lacking the will and commitment to protect American interests, much as Obama is.

No, it’s easy to see how the United States has lost our prestige and place as the world’s only super-power under the administration of Barack Obama.  Leading from behind, or not leading at all sends a message to our friends and our enemies.  And following seven plus years of Barack Obama, as Rodney used to say, “we don’t get no respect”.