Three Things Trump Needs to Do to Win in November

D.W. Wilber
|
Posted: Jul 12, 2016 12:01 AM
Share   Tweet
The opinions expressed by columnists are their own and do not necessarily represent the views of Townhall.com. 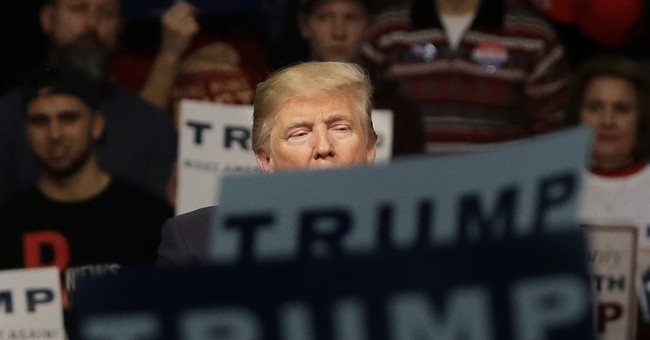 The 2016 Presidential Election should have been a cake-walk for Republicans.  When the Republican primaries started, any one of the original sixteen Republican candidates likely could have defeated former Secretary of State Hillary Clinton, the candidate of the Democrat Party in November.  Few could have guessed that in would walk businessman Donald J. Trump, who now threatens to grasp defeat from the jaws of victory.

The Democrat Party chose as their candidate the former Secretary of State, perhaps the most dishonest, corrupt, and despicable politician in American history.  Following the recent news conference by FBI Director James Comey, which detailed the investigation into Hillary Clinton’s e-mail scandal, incompetence can be added to the list of “qualifications” the Democrat candidate possesses.  Director Comey laid out a case for Hillary being the stupidest person in recent memory to run for the office of President.

But for Donald Trump to defeat her this fall there are some things he needs to do to get his own house in order with regards to the November election.  And current polling suggests that he has an uphill battle to convince the American people that he has what it takes to lead this country.

First of all, enough with the snarky Tweets.  They come across as juvenile and sophomoric.  There’s nothing wrong with making use of modern social media like Twitter and Facebook, some politicians have been very successful in making use of social media to get their message out and generate support for their candidacy.

But Trump needs to do so in a more reflective way.  American voters don’t want to read the type of blather one might expect to see scrawled across a bathroom wall in their local high school, coming from a candidate for President of the Unite States on his Twitter account.  They want to read responses or comments to issues and problems that offer a solution.

Secondly, Trump needs to keep the heat on his opponent Hillary Clinton, but drop the nicknames.  While “Crooked Hillary” might play well to his staunchest supporters, they are not the ones he needs to win over.  They’re going to vote for him come hell or high water.  Trump indeed does need the support of the great undecided, the independent voters in American politics.

The ammunition that Hillary Clinton has provided through her own words and deeds has put on public display her incompetence and dishonesty, and is more than enough to attack her on.  But Trump needs to look and sound presidential when doing it.  Attack her credibility and competence based on the lies she’s told throughout the e-mail and Benghazi probes by Congress.

Put on display for all to see how she has pandered to some pretty unsavory groups such as Black Lives Matter, which is nothing more than a racist,  anti-American insurgency spawned out of the “hands up, don’t shoot” lie from Ferguson, Missouri.  Hillary has aligned herself with BLM and has pandered to the black vote by criticizing the police every chance she gets, even though she hasn’t a clue what she’s talking about.  Then again that’s nothing new for her, not having a clue what she’s talking about that is.

Trump also needs to take some time to explain what he meant when he made his early comments about Hispanic immigration to the U.S.   While it’s certainly fine to decry the open border situation under the Obama Administration and the unrestrained illegal immigration affecting American jobs and security, Trump needs to let Hispanics know that they are valued members of the American community.

And he needs to explain clearly that his intentions to “build a wall” is in no way intended to prevent legal immigration into the United States by Hispanics, or any other ethnic group or nationality which contributes to America’s greatness.  Trump would do well to engage with them and to seek out the advice from Hispanic Americans on what needs to be done to address their grievances, and to fix the problems that affect their community.

The same with Muslims in America.  His proposed cessation of Muslim immigration is not much different than what was proposed by President Jimmy Carter back during the Iranian crisis.  But the way it was presented is.

If Candidate Trump will take the time to explain exactly what he intends, and how he appreciates the sacrifices made my many Muslims on behalf of the United States during the War on Terror, and in Iraq and Afghanistan, he will go a long way towards repairing the bridges to that community as well.

And finally Trump needs to show a little humility.  Time to tone down the bombast and circus atmosphere of his candidacy.  This would go a long way towards helping Trump convince the many undecided voters out there that he is not the madman and bigot that Democrats and Hillary Clinton are painting him to be.  With a little self-restraint Donald Trump can turn things around and still win this election.