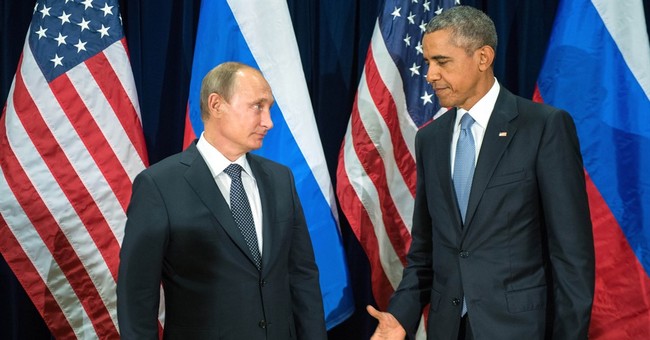 With a sly little smile, or perhaps more aptly a smirk on his face, Russian President Vladimir Putin encountered Barack Obama last week in New York at the United Nations. As Barack Obama extended his weak and submissive right hand to greet the Russian leader one can only guess what was going through Putin’s mind.

Vladimir Putin’s lack of respect for Barack Obama was and is obvious. He barely conceals his disdain for the American president whenever the two have occupied the stage together appearing at an event.

The former KGB thug is contemptuous of weakness, and he perceives Barack Obama as weak and wholly uncommitted to defending the United States. A person easily pushed around by the Russian leader who is determined to not only rebuild the Russian empire, but to humiliate the United States in the process.

Unfortunately Putin has accurately assessed his counterpart in the White House. While Putin considers himself a Russian patriot and nationalist who is committed to restoring Russian honor, and what he believes to be its rightful place as a world leader.

Barack Obama is not committed to defending the United States of America, a country he has only adopted as a venue to use for his political and social agenda ambitions. Not a country he reveres and loves, or one he believes in as exceptional and the world’s last great hope for freedom and democracy.

One only has to take a look at what has transpired over the past six plus years to understand how Putin has succeeded in bending Barack Obama to his will. Prior to Putin returning to the Russian presidency Barack Obama was overheard telling Putin’s predecessor that he, Obama would have “more flexibility” after the upcoming American elections.

A message delivered to Putin who immediately recognized it as coming from an American president who was weak and unwilling to assert American strength, and more interested in achieving an accommodation with the Russians than in defending American national interests. A reality that Putin seized upon right away and began to shift his plans to assert Russian dominance on the world stage into high gear.

His first goal was to show Russian military might and a willingness to use it by seizing the Crimea in Ukraine. This not only sent a message to Ukraine and the other former Soviet satellites, but also guaranteed Russian access to the Black Sea naval port facilities that he might need to further his expansionist plans.

The old Cold Warrior Putin watched with interest as Barack Obama drew an imaginary line in the sand in Syria, a line which Obama never intended to enforce. Apparently nobody told Obama or his secretary of state John Kerry not to try to bluff an old KGB poker player, someone who was experienced in the art of disinformation and distraction.

Putin could tell from the beginning that Barack Obama would do nothing in Syria, that his threats were hollow. He had watched as American commanders in Afghanistan had called for additional ‘surge’ troops only to have Obama delay and fumble around, and eventually provide fewer troops than had been requested, while placing unreasonable conditions and time constraints on the effort.

The Russian leader viewed Obama’s use of drones to kill select terrorist targets as a way for Obama to keep things ‘antiseptic’, and not dirty his hands with actually fighting a war on terror. He viewed Obama simply as a fool, and wanting only to give the impression to the American people that he was being tough on terrorists while the reality was that Obama was simply putting on a dog and pony show. Once again with no real commitment to protect America’s national interests.

And while Obama tinkered with the American military pursuing a ‘social agenda’ and weakening the military in the process, Putin saw that as an opportunity to take advantage while the Americans were kept off balance and busy trying to comply with all of the Obama administration’s social engineering at the expense of military readiness.

It’s quite obvious to anyone who knows Russian history, and recent Russian history under Vladimir Putin in particular that Barack Obama is being played expertly by Putin, like a cheap guitar in an ‘oldies’ rock and roll song.