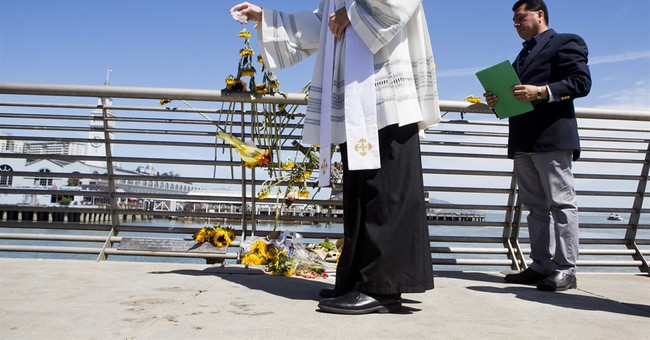 Another American, a young woman on the streets of San Francisco, is murdered by an illegal alien and politicians from both political parties collectively have blood on their hands. How so? Both Democrats and Republicans have failed to secure our borders and have allowed illegal aliens to enter the United States almost at will for decades, in both Republican and Democrat administrations.

While Democrats view each illegal alien as a potential new Democratic voter, for years Republicans gave a wink and a nod to the problem of illegal aliens crossing our southern border because it helped address a different concern, the need for cheap labor in the agricultural and other menial labor industries.

Presidential candidate Donald Trump stirred up a hornets nest recently with his comments about the character of illegal aliens entering the United States from Mexico. And while his comments may have been somewhat intemperate, the facts about what he alleges are pretty much on his side.

Certainly many of those entering this country illegally across our Border with Mexico are coming into the United States looking for a better life for themselves and their families. Many simply are running away from corrupt and abusive governments, and running towards the freedom and opportunity offered by that “shining city on a hill”, as described by President Ronald Reagan.

But unfortunately those individuals are equaled in number by the type of illegal aliens described by Donald Trump. A criminal element looking to take advantage of our porous southern border in order to pursue new opportunities for criminal activity and victims here in the United States.

Having spent two years working as a liaison with state and local law enforcement on our southwest border was an eye-opening experience for me. I had been vaguely aware that there were problems along our border with Mexico, but coming from the Midwest the extent of the problem wasn’t really known to me. And it’s still unknown to most Americans.

Once I began to work with law enforcement partners along our southern border I quickly began to see a much more troubling picture of what had been taking place. And it was a picture that if accurately broadcast by news outlets outside the region and all across America would cause a groundswell of outrage in this country.

If Americans only knew just how bad things were they’d be screaming for the heads of every politician in Washington, D.C. who have turned a blind eye to the threats to our national security as a result of our current, and our historical policies towards border security. Policies that both political parties are responsible for.

Contrary to the picture being painted by the Obama Administration and its Democrat Party allies, those crossing our southern border aren’t made up simply of the poor, downtrodden, and oppressed yearning for freedom. I’ve even heard some Democrat politicians refer to them as “undocumented Americans”! The true picture is something much closer to the one being painted by Donald Trump.

While America treasures our cultural diversity and our history of being the great “melting pot”, unfortunately many of those now coming to America have no interest in assimilating into American culture and contributing to make America a better country.

Many of the new immigrants to our shores are here to take advantage of our social services, the opportunities offered by our free market economy, or to use our laws and Constitutional protections to their advantage with little thought about contributing anything to our American society.

Sadly many of those who come here who genuinely want to experience the great American story are overshadowed by those who come with no intention of becoming anything but a picture on a top ten wanted poster.

And unfortunately the voices of those in law enforcement serving on the front lines of this current border invasion go unheard, or more accurately go un-listened to. It’s a real “inconvenient truth” that politicians don’t want to admit. Much more of a reality than the other inconvenient truth that some politicians try to pass of as a more serious threat.

And the insanity on our southern border continues to allow criminals and possibly terrorist organizations unfettered access into the United States.