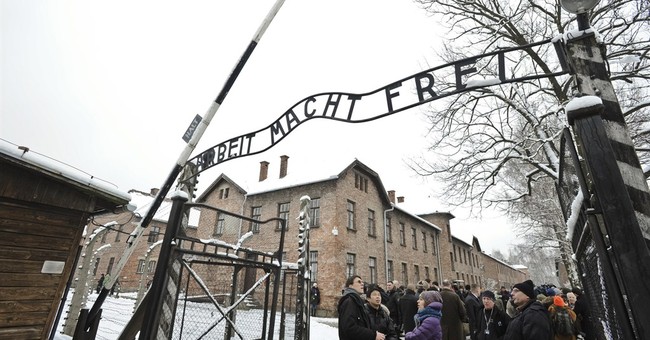 When confronted with the evil of Nazi Germany in World War II, the leaders of the United States and the rest of the world knew that the Nazis must be destroyed to rid the world of the threat they posed. And the world went to war to do just that, utterly and completely destroy the German Reich.

Certainly there was concern about what would need to be done after Nazi Germany was destroyed, but those concerns took a back seat to the importance of ridding the world of the evil represented by the fascist murders in Germany.

With Nazi Germany having conquered all of Europe the Allies understood and accepted that in taking back Europe from the Nazis the continent would become a battlefield, with cities, towns and villages, and many innocent citizens caught in the middle. It would be a terrible price to pay but one the allies knew would have to be paid in order to defeat the evil that threatened the world.

As part of the combined effort to destroy the evil the allied air forces embarked upon a bombing campaign against the German homeland, as well as other German military and industrial targets across occupied Europe. Including the very homelands of our allies.

Unlike the laser-guided ‘smart-weapons’ we have nowadays where a pilot can drop a single five hundred pound bomb down a chimney-stack and not so much as crack a window pane in the house next door, the bombing runs of World War II consisted of dozens of heavy bombers flying in formation, and carpet-bombing entire cities leveling whole city blocks. Killing anyone who happened to be in the area, whether a combatant or not.

The bombing campaign took place day and night, during one such attack the entire German city of Dresden exploded into flames. The German capitol of Berlin, along with most other German cities was also reduced to rubble by the end of the war. And prior to the D-Day landings, the French countryside where the Normandy invasion forces would soon land was heavily bombed in preparation for Operation Overlord.

With hundreds of thousands of civilians killed or displaced, the cost of winning World War II and bringing the horrors of Nazi Germany to an end was indeed high. A very high cost but one that was considered necessary, since the cost of allowing Nazism to continue to exist was considered to be far more costly.

Which brings us to the Obama Administration’s strategy for defeating the scourge of ISLAMIC terrorism. As voiced by the Department of State’s Deputy Spokesperson Marie Harf, “we cannot kill our way out of this war”, so according to her we need to find jobs for the fanatics who are butchering CHRISTIANS across a large swath of the Middle East.

During his recent conference on “violent extremism”, the president also spoke of offering jobs as a means of changing the current pathway to extremism many young Muslim men fall prey to.

But the reality is that the solution is the same as was pursued during World War II and less than one hundred years earlier during the War Between the States. And that is to completely and utterly destroy our ISIS enemy, accepting the fact that there will be some civilian casualties in doing so.

An unfortunate byproduct of ‘total war’ as practiced by the Allied Air Forces during World War II, and earlier during the American Civil War by Union General William Tecumseh Sherman on his ‘march to the sea’.

We need to destroy our ISIS enemy, turning the entire Middle East into a pile of rubble if necessary. And then we can rebuild it as we did with Germany and Japan after World War II. Money that was well spent with our two former enemies becoming strong American allies for decades afterwards.

Destroying ISIS brings an end to the terror and atrocities currently being committed by these animals against Christians, Muslims and all other “non-believers”. Once destroyed we can then work to shape and mold the Middle East into a strong American ally to have on our side against the Iranians, Russians and the Chinese.