Huckabee Was the Inspiration for the Twisted Character in My Novel 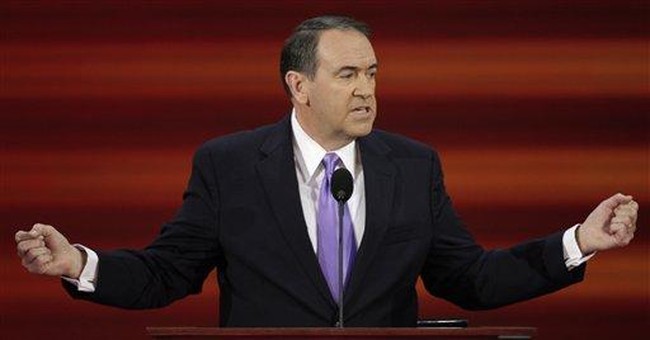 While doing publicity for my new novel “The Apocalypse Directive,” a number of interviewers asked me who served as the inspiration for the Evangelical President of the United States who professes to speak directly to God and so twists his Christian faith, that he is preparing to carry out the most heinous act known to humankind?  Other than stressing that it was not George W. Bush, I mostly left the question unanswered as I moved on to the next subject.

Mike Huckabee’s renewed, juvenile, and un-Christian written assault on former rival Mitt Romney compels me to admit that it was he who served as the inspiration for the evil character.  When is enough, enough for this guy?

In promoting his new book, Huckabee has decided to take Romney to task, not only as a way to settle an old score, but to fire a warning shot across Romney’s bow in preparation for the 2012 Republican primary.  Aside from the fact that we are all desperate for a breather from the just completed election, is this the type of behavior that should be exhibited by a Baptist minister?

According to published reports, Huckabee is still miffed with Mitt because he is successful, because of their past rivalry, and most of all, because Romney did not make a congratulatory phone call after Huckabee’s primary win in Iowa, of which Huckabee writes was “a sign of total disrespect.”

Gee, maybe Romney was just a bit down after the loss and forgot to call.  Or maybe, after Minister Huckabee continually smeared his Mormon faith, Romney saw no reason to be disingenuous with a man who never showed him or his family any respect.

Whatever the real reason, Romney seems to have made the right decision not to call.  At least, based on the fact that Huckabee continues to pile-on the former governor of Massachusetts with lines like, Romney was “anything but conservative until he changed the light bulbs in his chandelier in time to run for president.”

When asked for a response, Romney spokesman Eric Fehrnstrom said Huckabee was acting small.  “This type of pettiness is beneath Mike Huckabee.  If we’re going to move the party forward, we need to offer more than personal recriminations.  Unfortunately, in this book, Mike Huckabee is consumed with presumed slights, and he seems more interested in settling scores than in bringing people together.”

Mr. Fehrnstrom is wrong.  Obviously, it’s not “beneath Mike Huckabee.”  In case he has forgotten, let me remind the Romney spokesman of a Huckabee classic.

On the last day of 2007, this “man of God” decided to hold a news conference to unveil a nasty and negative ad aimed at former Governor Romney.  An unsavory ad that was devised and filmed by Huckabee in the midst of the Christmas holiday.  But wait.  As Huckabee got to the podium to announce the ad campaign, he had a Machiavellian change of heart.  “No,” he decided basically on the spot.  The ad would not run.  Of course, his change of heart had nothing to do with being “Christian” at Christmas-time and everything to do with trying to get the media to do his dirty work for him and run the ad for free.

During that same primary campaign, there were reports that Huckabee told a Pastor that God speaks to him.  In recounting all of this to an Evangelical friend of mine, the friend responded, “The tiny man who runs Iran and wants to wipe the United States and Israel off the face of the earth, also says God speaks to him.  No Christian should use the Lord as a cheap campaign gimmick.”

Should he want to read a fictionalized defense of Christianity and religion, I’d be honored to send Mike Huckabee a signed copy of my novel.  Hopefully, he won’t blame Mitt Romney for the hauntingly familiar character.