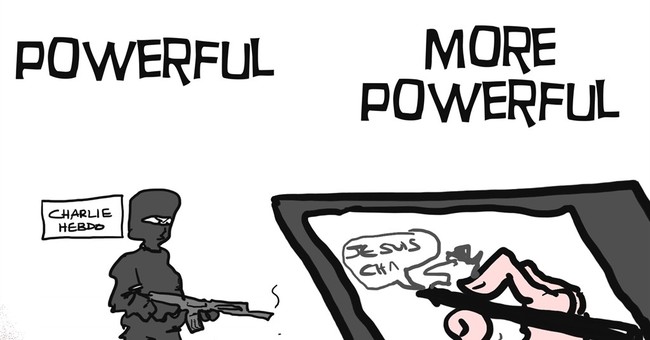 I have a penchant for satire. It’s got to be because I grew up on high doses of MAD Magazine.

I simply love it. I mean, it’s like a big ol’ piece of strawberry pie to me. It’s delicious when it’s wielded well by an able craftsman. And I said craftsman on purpose because we all know women are genetically incapable of satire given their smaller brain and their obsession with silly things like shoes and flat irons. It’s science. #boom.

I’m just kidding, ladies. So, relax. I’m not a Muslim.

Anyway, when I was young and my buddies were dreaming about being the next Roger Staubach, my focus was on becoming the next Mort Drucker. Which explains a lot of my adult life. And I’m not sorry for it. I can’t be because this is how Jesus hardwired me and Jesus loves me just the way I am, right? Or is that maxim only applicable to Lady Gaga fans?

Indeed, from a very young age when I didn’t like something, or thought some authority figure needed correcting or some movie really sucked, I took it upon myself to sledgehammer into oblivion, with cartoons and caustic humor, the vices, foibles and abuses I beheld.

Yep, I came in like a wrecking ball, but not just for destructive reasons. No, my purpose-driven tongue and pen had as it’s goal two desired results when I was a teen: 1) To shame into improvement whatever was in my sights, because the sweet approach clearly wasn’t working with said person; and 2) Pick up chicks.

Fast forward to my early 20’s, after my conversion to Christianity.

Once I was converted, baptized and tossed into a group of believers, my nicer-than-Christ buddies at church tried to get me to repent of my sarcastic bent; and as you can tell…well…it didn’t work.

One of the major reasons why their exhortations to get me to chill fell flat was I could read, and in the Bible God’s guys and gals weren’t shy about letting someone have it if that was the only way they could get a person to wake the hell up or to isolate a person or a group as a pariah to avoid.

If you don’t believe me, then take this little challenge: From now on when you read the Scripture, pay close attention when you land on a chunk of text in which Moses, Joshua, David, Elijah, Jeremiah, Ezekiel, John the Baptist, Paul or Jesus is engaged in dialogue with an idiotic idolater, a pompous Pharisee, a pain-in-the-ass politician or a daft disciple.

Check it out. You won’t see these searing saints doling out just fluffy stuff. Nope, they would challenge and oft- times ridicule the very ground the impenitent unbeliever or the feigned professor stood on. Not only that. You will rarely see God’s holy ones repenting of the diatribes they aimed at their audiences' willful blindness.

That’s why I believe, though not as crudely as Charlie Hebdo’s boys have done, that if Jesus were walking planet earth today he would let kooky Islam have it right between the eyes with his verbal invectives. He would mock them and denounce them because they make the 1st Century Pharisees look positively gracious and laid- back and Christ was brutal with them.

Yep, Islam’s violent jihad, their abuse of women, their implacability and exclusivity coupled with their backward- ass worldview would draw out the satirist in Christ. He wouldn’t dance around their non-sense, and you know what? Neither should we.

There’s no way the biblical Jesus would bow his knee to pusillanimous political correctness that forbids freedom of speech (cartoons/satire) so as not to offend religious extremists who'd like to force nations to obey the dictates of a 7th century pedophile who heard voices.

In my humble opinion, if you think differently…you’re nuttier than a squirrel turd, especially if you claim to follow the Christ of the Bible. The person who is truly good and godly will also sport a well-tuned BS-detector and the courage to let it rip in the face of such inequities and absurdities; just like Christ did.

Release the hounds of biting satire. In Jesus’ name. Amen.