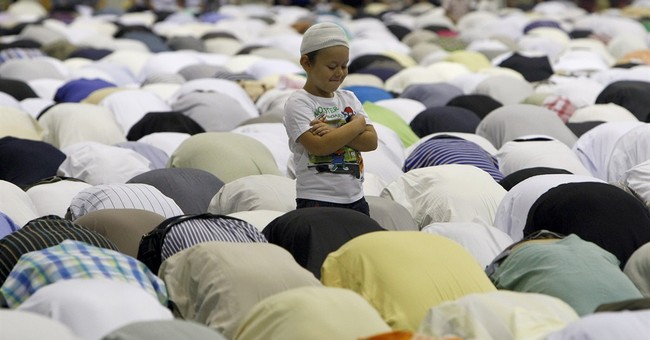 Trending
Last week, Gary Cass, who drives defendchristians.org, contacted me asking if ClashDaily.com would run his piece titled, “I’m Islamaphobic, Are You?” I gave it a read and quickly said, “Heck yeah”, because Cass, like Clash, believes Islam is implacable and must be stomped on like a narc at a biker party.

In his sensible screed Gary gave three powerful points on how we must deal with violent Muslim mayhem. Check it out:

I confess, I’m “Islamaphobic,” but for very good reasons.

My fear is not an irrational fear based on uniformed prejudice; rather it’s an historic, clear-eyed, informed, rational fear. ISIS is doing to America journalists what every true follower of Mohammed wants to do to you and yours; subjugate or murder you. They believe they have been given a mandate by Allah (Satan) to dominate the world.

Are there any solutions? All the seminars, petitions, books, laws, articles and other similar actions are worthless. Muslims laugh at us for how stupid we are when it comes to dealing with them.

Here’s three possible solutions, but really there’s only one.

1.) Conversion: Wouldn’t it be wonderful to see Muslims turn from Satan (Allah) to Christ? But, I agree with Phil Robertson, this is not biblically doable. Why? God has a plan and he revealed it at the birth of Ishmael, the father of the Arabs. “The Angel of the Lord said….He [Ishmael] will be an ass of a man; His hand shall be against every man, and every man’s hand against him…” (Genesis 16:11,12). The Arab Muslims are God’s sworn enemies and are ordained by God to be against everyone. That’s not to say there will not be a small percentage of Muslims who will be saved by faith in Christ.

2.) D.A.M.N.: Depart All Muslims Now. Deport them like Spain was forced to do when they deported the Muslim Moors. Muslims in America are procreating at twice the rate of other groups. So, either we force them all to get sterilized, or we wait for the “Army of Islam” to arise in our midst and do what Muslims always do, resort to violence.

3.) Violence: The only thing that is biblical and that 1400 years of history has shown to work is overwhelming Christian just war and overwhelming self defense. Christian Generals Charles Martel in 732 and Jon Sobieski in 1672 defeated Islamic Turks and their attempts to take the West. Who will God raise up to save us this time? Will God even intervene or turn us over to the Muslims for turning against Him?

Succinctly stated, these sentiments are no different than what has been proffered by many other national security experts.

To my Clashers Cass’ column was not a big shocker, as the millions who rock up to my site month after month actually believe the bellicose “Religion of Peacers” when they say they mean to wipe us infidels off the face of the earth and establish a global caliphate, a veritable worldwide Suckistan.

The reason Cass asked me to float his column was because his column got canned by Charisma magazine’s website. They originally posted it and then pulled it because, according to an insider, it was causing Charisma to receive threats from … guess who … Muslims. So, being the typical spineless wonders the church has come to be, Charisma yanked it less they tick off the perpetually perturbed Islam.

Let me see if I understand Charisma’s editorial decision making process: Islamists cut our journalists' heads off, slaughter Christians in mass executions, burn churches to the ground and post it on YouTube, and a “Christian” website is afraid to run a column condemning such atrocities? You’ve got to be kidding me. It’s this kind of cowardice that’ll cause us to lose our religious liberty and possibly our lives.

Look folks, in case you’ve missed the ubiquitous memos … Islam means to kill us, and they’re not kidding. And yet, some amongst us won’t run a column condemning them lest Islam gets irate. Wow. How the mighty have fallen.

Which brings me to this point: As long as the church can be cowed to roll up in the fetal position and wet their big Christian diaper when threatened, the more we court our own demise and the destruction of freedom lovers worldwide.