Donald Lambro
|
Posted: Apr 07, 2017 12:01 AM
Share   Tweet
The opinions expressed by columnists are their own and do not necessarily represent the views of Townhall.com. 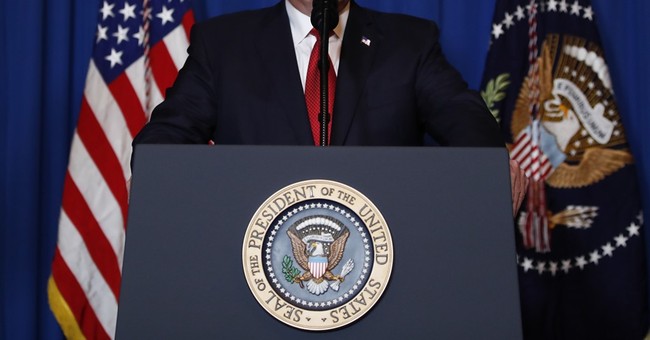 WASHINGTON -- President Trump's problems, at home and abroad, have been mushrooming in recent weeks faster than he can say, "Make America great again."

House Republican leaders are likely to take a two-week break without making any progress toward passing a revised health care bill -- raising doubts that Trump will be able to make good on his campaign promise to repeal and replace Obamacare anytime soon.

After weeks of reports about deepening divisions among his chief advisers in the White House, Trump removed his chief strategist and political guru, Stephen Bannon, from the National Security Council in a dramatic reshuffling that has given the NSC team's top military and intelligence officials increased roles in setting policy.

The move elevates the influence of National Security Adviser H.R. McMaster, a three-star Army general who was uncomfortable with anyone on the NSC who was principally known for his political influence in determining the administration's policies.

At the same time, the House and Senate Intelligence Committees have broadened their dual investigations into the Trump advisers and other outside associates who've had secret contacts with Russian operatives close to Russian President Vladimir Putin.

The panels have been collecting intelligence documents and preparing for public hearings that are sure to reveal details of these contacts, and whether the Russians were promised that economic sanctions against Moscow would be reduced by the new administration in an attempt by Trump to set a new relationship with the Kremlin.

Meantime, doubts are being raised about whether the Trump economy will show any significant improvement in the near term.

Minutes of the Federal Reserve Board's March policy meeting, released Wednesday, showed that several board members believed that future policy changes, including across-the-board tax cuts, were unlikely to strengthen the economy until sometime next year.

And several other Fed members said they feared that other parts of Trump's agenda, such as immigration, trade tariffs and border taxes, could slow down future economic growth.

The economy grew by a dismal 2.1 percent in the fourth quarter of 2016, according to the Commerce Department's Bureau of Economic Analysis.

The "general picture of economic growth remains largely the same," the BEA said this week in its report on the nation's gross domestic product.

In addition to his call for lower tax rates on businesses and individuals to get the economy moving again, Trump also campaigned for raising trade tariffs, pointing to large U.S. trade deficits with other countries.

But that argument significantly weakened this week when the government reported that the U.S. trade deficit fell sharply in February compared with the previous month. The gap between U.S. imports and exports dropped to $43.6 billion in February, down from $48.2 in January.

The reason: U.S. products exported to our trading partners rose because their consumers bought more made-in-America goods, cars and other products.

The government data released this week also revealed that our trade deficit with China sharply declined to $23 billion in February, as imports from China fell by a record $8.6 billion.

The clear lesson learned here is that a stronger global economy will result in more sales for American producers. But Trump faces other hurdles in his efforts to lower the trade deficit further.

"Despite vows to bring it down, it's unlikely that the new administration's policies will be able to alter the course of the trade balance, which is buttressed by the high dollar and comparatively strong U.S. demand vis-a-vis the rest of the world," says Michael Dolega, a senior economist for TD Economics.

Clearly the biggest challenge Trump faces in the months to come is North Korea, which test-launched another medium-range ballistic missile on Wednesday. That, most assuredly, will be the chief issue that he will discuss with Chinese President Xi Jinping this weekend.

"We have a big problem ... and that's going to be my responsibility," Trump said of North Korea in a news conference Wednesday in the White House Rose Garden.

And it's only going to get bigger, much bigger. National security experts say that the Communist regime is likely to develop a long-range nuclear missile with the capability of reaching the U.S. before Trump leaves office.