What We Must do to Stop the Escalation of Mass Shootings 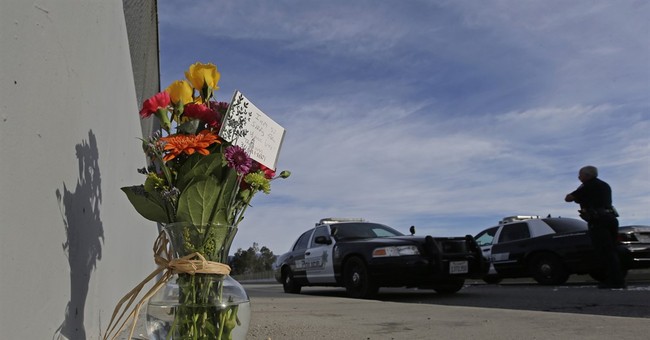 Once again Americans were gunned down in cold blood in a mass shooting, only this time by assailants dressed and armed like terrorists.

The attackers killed at least 14 people and wounded 17 at a Christmas party at the Inland Regional Center facility that serves people with developmental disabilities in San Bernardino, Calif.

It is like a horrible, repetitive nightmare that continues to haunt Americans, raising questions about what can be done to prevent this from happening again.

It was the deadliest mass shooting since the massacre at Sandy Hook Elementary School three years ago where a deranged youth killed 26 children and school personnel.

But it is shocking to learn the number of mass shootings has been rapidly escalating this year.

On June 17, nine were killed at a historic black church in Charleston, S.C.; five at a military recruiting center on July 16 in Chattanooga, Tenn.; nine killed at Umpqua Community College on Oct. 1 in Roseburg, Ore.; then last week's attack at a Colorado Springs Planned Parenthood facility;and most recently, the 14 killed Wednesday.

It was the 355th such attack this year, according to an Internet site that keeps track of mass shootings.

In Wednesday's episode, two of the attackers were killed by police, and a third suspect was taken into custody.

They were reportedly wearing masks, dressed in black, and armed with assault rifles, handguns, and according to reports Wednesday, tossed objects from their black van as they fled -- that may have been pipe bombs.

"We heard something like explosives -- big sounds first, then a few seconds…we heard the gunshots," said an employee of the public health department.

Police told reporters that they came to the facility "well prepared" as if they were on "a mission."

Was this a domestic, terrorist attack? It certainly looks like it.

"One of the big questions that will come up repeatedly is: 'Is this terrorism?'" says David Bowdich, the assistant director in charge of the FBI's Los Angeles office.

A law enforcement official said one of the suspects was identified as Syed Farook, a health inspector at the San Bernardino County Department of Public Health which hosted Wednesday's holiday party.

Recent mass murders have been carried out by a lone, mentally deranged killer.

According to the Washington Post, "Multiple-shooter events are extremely rare… [In] a recent FBI report on 160 'active shooter incidents' between 2000 and 2013, all but two involved a single shooter."

"The one thing we do know is we have a pattern now of mass shootings in the country that has no parallel anywhere else in the world," President Obama said in a television interview.

Once again, he called for stricter gun laws and pointed out one of the most egregious loopholes: People on the no fly list can legally buy a gun.

"Those same people who we don't allow to fly could go into a store right now in the United States and buy a firearm, and there's nothing that we can do to stop them," he said.

The grim reality behind the fast increasing rate of mass shootings has a lot to do with long-ignored mental health issues -- and with households whose parents legally own guns, often lots of them, that are easily available to their children.

The mass killer at Sandy Hook Elementary School was a deeply disturbed youth whose mother, who knew of his mental illness, had a very large collection of handguns and rifles in her home. He used them to kill her before he went on his rampage of death.

One of the most preventable mass shootings occurred on September 16, 2013 at the Navy Yard in Washington, D.C., not far from the nation's Capitol.

Arron Alexis was a 34-year-old civilian contractor in the Navy who had a long, well-documented history of severe mental sickness, but no one reported the red flags up the line of authority.

He underwent numerous examinations by doctors, and had run-ins with the law, yet he still retained his security credentials to gain access to the Naval base anytime he wanted.

One day he snapped, walked into the Navy Yard with his security pass, killing a dozen people before he was shot and killed.

I don't have all the answers to the rash of mass killings that are occurring in our country with increasing frequency, but here's a few.

We certainly need to step up security at all of our public buildings and transportation facilities, with IDs, bag and package searches, X-ray scans. Just as we do at airports.

The days of easy access to public schools and colleges have to be a thing of the past. We need security officials at every door, checking everyone who passes through them -- the same security that members of Congress installed in the Capitol.

In an age of home security devices and alarm systems -- not to mention terrorism -- we're going to have to get much more serious about this in our day to day lives.

We have to be much more vigilant with mental health issues, watching for signs of illnesses that need to be reported, with plenty of follow-up procedures.

I don't see any chance of Congress banning the sale of guns. Americans have a Constitutional right to protect their family and themselves. But psychotic people shouldn't be allowed to own guns.

Parents with children, with easy access to firearms at home, need to be held fully accountable if they are used to harm others.

But what I want to know is who let these rifle-carrying killers into the Inland Regional Center building in the first place.