The House GOP Better Get Its Act Together Soon 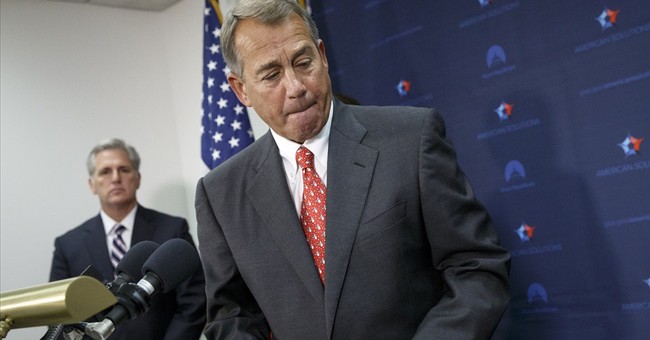 WASHINGTON - There's nothing the liberal news media likes to report about more than rank and file Republicans fighting among themselves.

The bitter battle's been going on for several weeks or so, turning into a chaotic House GOP leadership struggle that is paralyzing Congress and blocking legislation needed to run the government.

The Democrats are just as delighted by the dysfunctional divisions that have broken out across the aisle. But that's cold comfort for a party that's lost its majority as a result of an unpopular president whose approval remains stuck in the mid-40s.

This is Family Feud, Washington-style, or more to the point, a war between tea party revolutionaries and the GOP Establishment.

Only, in this case, no one threw tea overboard in Boston Harbor. They threw their leaders overboard, in a manner of speaking.

Next to walk the plank was GOP Majority Leader Kevin McCarthy, who was ready to take Boehner's place until the tea party activists sent word that they were nearly in lock-step against him, too.

Replacing Boehner with McCarthy would be a case of Tweedle-Dum and Tweedle-Dee, the insurgents said. The time for compromise was over. It's time for a new leader who can unite a divided party. From now on it's no more Mr. Nice Guy, they said.

Besides being Boehner's handpicked lieutenant, there was another reason why McCarthy didn't make the cut. He was a gaffe-prone pol in a business where there's no room for political missteps.

And McCarthy, right in the middle of his campaign for the speakership, delivered a doozy.

He suggested that the Select Committee to investigate the terrorist attacks on the U.S. consulate in Benghazi was set up to damage Hillary Clinton's presidential candidacy

That blunder, plus the fact that he didn't have the GOP support he thought he had, swiftly ended McCarthy's bid.

Ironically, it was Boehner himself who long ago predicted the tea party would bring bold new leadership to the GOP.

When they were packing town halls in 2009, berating GOP lawmakers and protesting Obamacare, McCarthy and Boehner flew out to a rally in Bakersfield, Calif. and reported back to their colleagues that the tea party had ignited a movement that would help the GOP win control of Congress.

"The people participating in these protests will be the soldiers for our cause a year from now," Boehner said at the time, according to a profile in the New Yorker.

Throughout Obama's troubled presidency, the national news media ran polls about how unpopular Congress is, particularly the Republicans.

But before the media figured out what was really going on at the GOP-leaning grassroots, the Obama Democrats were toppled from power.

With little more than a year left in Obama's presidency, with little life left in it, House Republicans hold their largest majority since the 1920s.

However, all that may be in jeopardy if the Republicans can't get their act together, choose a skillful speaker who can unite the party, finish its business on the budget by year's end, and reassure voters that Congress is in good hands.

But there is far more at stake here than the House and Senate elections.

There is also next year's presidential election which is the key to getting good things done, not just the way the tea party wants done, but the only way it can be done.

We've tried divided government, with the GOP running Congress and Democrats running the executive branch, and found that it's a recipe for legislative paralysis.

Obama will not sign any legislation that will significantly reduce spending, curb the budget deficit and public debt.

If Hillary Clinton wins the Democratic nomination and the presidency, she will effectively be Obama's third term, taking office with a big spending agenda that's in large part an exact copy of what we've been doing in the last seven years.

That's why it's imperative that the GOP holds Congress and wins the presidency next year.

But that outcome is endangered by the GOP's fractured House caucus who can't agree about who should be its next speaker who controls all of its legislative operations.

There are those in the House's tea party caucus who seriously believe they can force Obama to do what they want by refusing to pass a budget and thus shutting down the government. Or by refusing to raise the debt ceiling and default on our loans.

But if the news out of Washington, as we head into the 2016 elections, is about Republicans shutting down the federal government, the Democrats win. And nothing gets done.

We've been through this drama before, and it always ends badly -- for the Republicans.

Why? Because they run Congress and, according to the Constitution, control the nation's "purse strings."

The nightly network news, the newspaper headlines, and the nation's entire focus won't be on getting control of spending, or reducing the budget deficit or getting out of debt.

It will be entirely focused on dysfunctional government that is in the process of shutting itself down. In the end, the White House always wins that fight and the people on Capitol Hill lose because only they control appropriations.

This is a Congress that is perfectly capable of cutting the budget over time, but that means electing a president who can and will sign the necessary legislation to do that.