Hillary Carelessly Stored Classified Information in Her Home Computer and We're Going to Put Her in Charge of the Government? 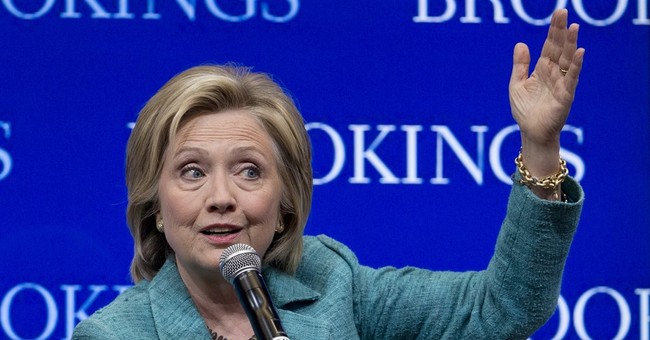 After many months of denying she sent any classified information on her personal computer system, Clinton now says she made "mistake" and she's "sorry" for her actions.

Clinton, who has an obsessive reputation for secrecy, decided not to use the government's secured computer system because she wanted to use two systems -- one for official work and another for personal messages.

Instead, she mingled all her messages through a private server in her home, a decision she now acknowledges was a risky one.

"As I look back on it now, even though it was allowed, I should have used two accounts. That was a mistake. I'm sorry about that. I take responsibility," she said in an interview with ABC News on Tuesday.

But it was much more than just a "mistake." It was a case of exercising poor judgement in one of the highest offices in the government where secrecy is a vital matter of national security.

In a high tech era where America's enemies have been hacking into government computer accounts, Clinton took a chance that this wouldn't happen to her home server. For her, it was all a matter of convenience.

As of last Friday and Monday, in interviews with NBC News and the Associated Press, she refused to apologize for her actions.

While Clinton said she regretted her decision, calling it a poor choice, she insisted she had done nothing wrong. She saw no need to apologize, she told the AP, insisting that "what I did was allowed."

But as the months wore on, the e-mail scandal grew in intensity. She was called to testify before Congress, under oath.

The inspector general's office for the federal intelligence community raised questions about information on her e-mails, and sent a referral to the Justice Department which launched an investigation.

The FBI is in the midst of digging deeply into Clinton's e-mails, as is an investigation in the State Department that has found passages that were considered classified.

In some cases, messages were entirely "redacted" or blacked out.

That means the State Department decided the e-mails contained sensitive information that should have been marked classified.

In the final analysis, Clinton was pushed into making a public apology because the controversy was damaging her presidential candidacy and her approval polls were dropping.

A recent Washington Post-ABC News poll showed that 53 percent of Americans had an unfavorable opinion of her -- up by eight points since this summer.

Fiery Vermont Sen. Bernie Sanders, a self-described socialist, now leads her by 11 points -- 48 percent to 37 percent in New Hampshire, according to an NBC-Marist poll released Sunday.

In Iowa, a Quinnipiac University poll shows Hillary has also lost her edge, with Sanders moving up to a single-digit lead, 41 percent to 40 percent.

But Clinton's candidacy presents the Democrats with a number of other problems besides the mismanaged e-mail controversy.

So far in her campaign, she has for the most part shied away from big political rallies, preferring to take a limited number of questions from small groups of voters.

She is not the kind of candidate who's going to fire up a crowd and that's presented problems for her advisers who are trying to inject excitement into her low-key campaign style.

Her discouraged advisers were said to be searching for "new efforts to bring spontaneity to a candidacy that sometimes seems wooden and overly cautious," the New York Times said Monday.

"So far this year, the formula has escaped them," writes Dan Balz, the Washington Post's chief political reporter.

"The candidate's innate guardedness has made their task all the more difficult. That is likely to remain a challenge for as long as she is in the public arena," he said.

That's not a problem for Bernie Sanders who has been drawing wildly enthusiastic audiences in the thousands to his rallies, with a red meat, far-left message that is turning on Democratic voters across the country.

The campaign styles of Clinton and Sanders couldn't be more different. His speeches could wake the dead. Her speeches will put you to sleep.

The question that's now beginning to be asked about Hillary's candidacy in Democratic leadership circles, as her polling numbers continue to decline, is whether they need a new candidate.

That, of course, means Vice President Joe Biden, who is mulling a possible run, and who at least knows how to turn on Democratic voters.

What could push him into the ring?

Further deterioration in Hillary's polls, perhaps into the lower 30s.

Second thoughts in the party that she is unprepared to be president.

When President Clinton put her in charge of coming up with health care program, the plan she authored was so incomprehensible, Democrats refused to report it out of committee and it never came up for a vote.

And we're going to put her in charge of the government?