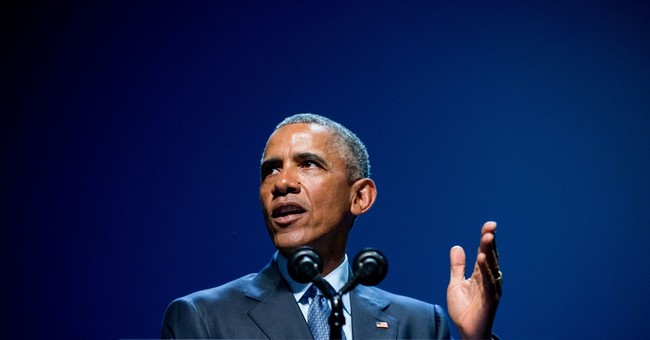 The global sell-off on "Black Monday" not only shook Wall Street to its core, but also American confidence -- and all that implies in the 2016 presidential election cycle.

Nearly six in 10 Americans say the Obama economy is "getting worse," according to the Gallup Poll. That's not only bad news for investors but for workers who watched their 401(k) retirement plans and pensions plummet into the red.

The Dow Jones industrial average fell more than 1,000 points on Monday, then recovered somewhat, only to sink again by closing nearly 600 points, Few corporations were spared, including the biggest and most successful, from Apple to Boeing.

Global analysts blamed the turmoil in China and its latest currency manipulation in the wake of a slowing economy that has spread throughout Asia and the world's other major economies.

But the fact of the matter is that Wall Street's steep sell-off wouldn't have happened to the degree it did if the U.S. economy were running at full throttle.

Job creation has been anemic. Economic growth has been stuck in the 2 percent range. Consumer spending is nothing to write home about. Wages remain flat, the retail sector is weak, and the housing sector is stuck in neutral.

The Commerce Department announced Tuesday that new home sales came in at around 481,000 last month, less than the 510,000 housing economists had forecast.

These and other disappointing developments have sent America's economic confidence into a nose dive, Gallup says.

"Americans' perceptions of the economy's direction became more pessimistic last week, as the outlook component score fell six points to -21, the lowest weekly average since the end of July 2014," the polling firm said.

Gallup's latest survey found that only 37 percent of Americans say the economy is "getting better", while 58 percent said it is "getting worse."

The stock market wasn't the only number in a free fall. President Obama's job approval polls sank to 45 percent this week. And 51 percent now say they disapprove of his job performance as president.

As for Obama's insistence that the unemployment rate has fallen into the low five percent range, Gallup's daily job polls paint a darker employment picture.

A devastating 14.7 percent of part-time Americans are "underemployed" and need full-time work, but can't find one.

There's plenty of reason to doubt the administration's 5.3 percent unemployment rate, too, because so many jobless workers aren't counted by the Labor Department's Bureau of Labor Statistics.

All of this points to a golden political opportunity for the GOP in 2016 which, according to economic forecasters, isn't going to be much better than this year, and possibly, worse.

What happened in the stock market Monday showed us just how pessimistic our economy has become in Obama's presidency.

The basis of a strong, growing economy is confidence. But that hasn't been the case under Obama since 2009. Indeed, the word that's used most frequently to describe his administration's policies is "uncertainty."

When Ronald Reagan became president, voters knew from day one that the basis of his economic policies would be pro-growth, pro-jobs, pro-investment, across the board tax rate cuts.

The very policies that President Kennedy ran on in 1960, and with good results in both cases.

Once those tax cuts were enacted, there was never any doubt or uncertainty about them. They were embedded in the tax code and weren't going away.

Reagan's policies led to a burst of business investment, new job creation that rose monthly in the hundreds of thousands, and economic growth rates that grew from three percent to 8.5 percent in the last half of his first term.

We had a referendum on his policies in 1984 when he won re-election to a second term, carrying 49 states.

Compare that to the third and fourth years of Obama's first term when his anemic quarterly growth rates were 0.4 percent, 1.3 percent, 1.8 percent, 2.0 percent and 1.5 percent.

Where did Obama go wrong? When he went looking for an economic policy to create jobs and put America back to work, he turned to FDR's New Deal programs in the Great Depression that did not end until World War II.

Obama spent $1 trillion on "shovel ready" public works projects, but when the bridges, roads were repaired, the jobs ended, the unemployment rate hardly budged and the lackluster economy remained at best anemic.

Now we are in the seventh year of Obama's presidency and entering a new election cycle. Pollsters tell us that the economy, jobs and incomes are still the top issues. Hillary Clinton is the Democratic presidential frontrunner who is running on Obama's old economic agenda and expecting a different result.

Good paying jobs are still in short supply. Confidence in Obama and the Democrats are at a new low. The GOP now rules Congress. And voters seem ready and eager for an entirely new leadership change at the White House in 2016.