Socialist Bernie Sanders Blames Billionaires for All Our Ills, But Draws Huge Crowds As He Leads Clinton in New Hampshire 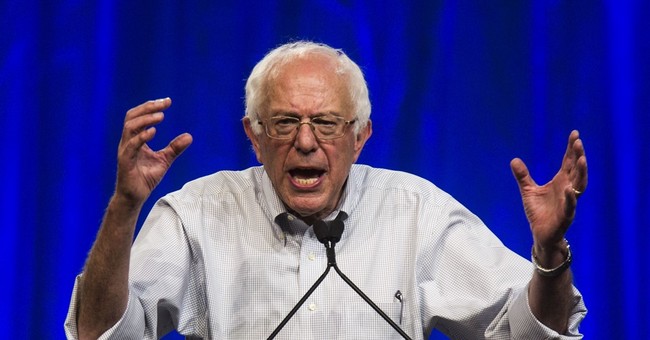 WASHINGTON - Thousands of Americans have been turning out to cheer fiery Sen. Bernie Sanders who blames millionaires and billionaires for everything that's wrong with our country.

Sanders is hot right now among a growing number of Democrats who are increasingly turned off by front-runner Hillary Clinton's lackadaisical campaign that's lost all its energy -- that is, if it ever had any.

Little by little, Sanders is gaining on her with a populist, red meat campaign fueled by seven job-scarce, low-wage years that have been the hallmark of the Obama economy.

Clinton can only dream about the huge crowds Bernie is drawing. An estimated 27,500 packed the Los Angeles Memorial Sports Arena Monday, or watched from outside the stadium on large screens.

"Did all of you make the trip out here on a Monday night because everything is going well for you and your family?" asked union leader Dante Harris.

"No!" the crowd roared back in response, sending an angry message to their party and President Obama who's been spending two weeks vacationing with wealthy people at Martha's Vineyard.

The Gallup Poll's weekly Economic Confidence Index continues to show that Americans are unhappy with the economy's direction. A survey last month found that 56 percent of Americans said the economy was "getting worse."

Last week, the U.S. Bureau of Labor Statistics told us why. The economy had added just 215,000 jobs in July, a pitifully small number in a labor force of 160 million people.

"That's well below the 260,000 monthly additions posted in 2014," says University of Maryland business economist Peter Morici. He forecasts that new job opportunities and wage gains will remain "depressed for the balance of this year and next."

The economy was growing by a weak 2.3 percent in the second quarter and may be revised upward a bit, "but stronger economic growth is not translating into a more encouraging labor market," Morici says.

"Wages, after adjusting for inflation, remain stagnant," he said in his latest analysis. "Expect job growth to remain at about 215,000 per month and wages to barely keep up with inflation."

The network news shows, as usual, gave the 215,000 jobs report their usual rosy review, but if you read more deeply into the BLS report, the jobs picture is worse than reported.

For example, the number of unemployed Americans -- 8.3 million -- "was unchanged."

"The number of long-term unemployed (who have been jobless for 27 weeks or more) was little changed as well at 2.2 million," BLS said.

The nation's labor force participation rate, too, which has been shrinking under Obama's failed policies, "was unchanged at 62.6 percent…"

"The number of persons employed part-time for economic reasons (sometimes referred to as involuntary part-time workers) was little change in July at 6.3 million."

"These people, who would have preferred full-time, were working part-time because their hours had been cut back or were unable to find a full time job."

And that's how Obama keeps his dubious jobless rate at 5.3 percent.

And let's not forget the 668,000 discouraged workers in July, a number that was little changed from a year earlier, who have looked for work but believe there were no jobs available for them. They aren't counted among the jobless, either.

Dig a little deeper and you find that a lot of jobs created last month were lower paying ones: 36,000 in retail and 29,000 in food services and bars.

And the manufacturing jobs boom Obama brags about? It produced a measly 15,000 jobs last month.

Now, let's get back to Bernie Sanders when he walked onto the stage at the Los Angeles arena to a roar that was described as "deafening."

"This is not a billionaire-funded campaign. It is a people-funded campaign," Sanders said. "There is no president who will fight harder.. for a higher minimum wage. Or for paid parental leave. Or for at least two weeks of paid vacation." The crowd, described as "young hipsters and graying hippies" and some who wore "black T-shirts with red hammers and sickles" roared their approval.

Do you see a proposal in Bernie's spiel that will unlock capital investment to create millions of new business start-ups or expand existing businesses and create good jobs?

There would be no Apple computer, Microsoft, Google, or millions of other profitable businesses without investors large and small.

As ignorant as Sanders appears to be, even he must know the story about how Ben & Jerry's Vermont ice cream company started with a tiny investment and grew into a wholly-owned subsidiary of Unilever with thousands of new jobs.

The issues that confront our country in this election are not about billionaires. They are about creating a thriving, free economy that encourages investing in the businesses and jobs of tomorrow-- just as Ben & Jerry did.