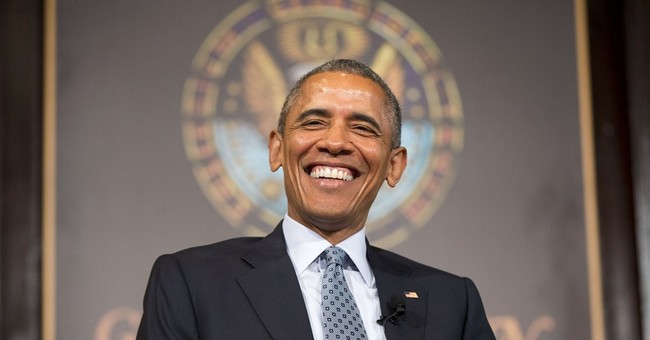 WASHINGTON - Barack Obama participated in a panel discussion this week about poverty in America, but failed to acknowledge the central reason why it has remained so high under his presidency.

And that reason has to do with anti-growth policies that have held back tens of millions of low income Americans, and destroyed entry level jobs that would help the poor get on the first rung of the economic ladder.

The Census Bureau, which gathers the nation's poverty data, said that more than 45 million Americans were stuck below the poverty line, according to figures released late last year.

This means that nearly 15 percent of all Americans live in poverty.

Obama never misses an opportunity to brag about how much better life in America is under his presidency, often cherry picking numbers that leave out other statistics that show how bad things really are in Obama's economy.

He can't do that with the poverty numbers we've seen under his administration. With a little more than a year and a half remaining in his presidency, poverty rates are much higher than the 12.3 percent level under his predecessor in 2006, before the Great Recession began.

You might think Obama would have reached one or two conclusions about why poverty remains so high under his presidency.

But he hasn't a clue, as he fully demonstrated during a panel discussion on poverty at Georgetown University on Tuesday.

Consider his odd observation that racial segregation in America has since been replaced by "class segregation," a societal change that, he said, needs to be addressed.

That sounds very much like the class warfare themes Obama has demagogued throughout his two campaigns for president. But how can we lift the poor out of poverty? He didn't say.

Here's a sampling of Obama's muddled thinking about all this:

"The stereotype is that you've got folks on the left who just want to pour more money into social programs and don't care anything about culture or parenting or family structures," he said.

"And then you've got cold-hearted free-market capitalist types who are reading Ayn Rand and think everybody are moochers. And I think the truth is more complicated," he added.

It is certainly more complicated, but the president didn't seem willing to wade into those complexities.

Maybe because they haven't been part of his economic agenda over the past six and a half years when, in much of the country, it's been harder to find a job, especially for minority teenagers and young adults whose jobless rates are in the double-digits under policies.

Nowhere in the news reports about this conference did I see the words "economic growth" or anything about the importance of entry level "job growth" and how pivotal that is to improving the lives of poor or low income Americans.

Certainly Obama didn't bring this up in his rambling and incoherent presentation.

At one point in the panel discussion, he dealt at some length about how Fox News characterizes the poor as "moochers" who simply want government handouts.

"They will find folks who make me mad. I don't know where they find them," he said. "They're like, I don't want to work. I just want a free Obamaphone or whatever. And that becomes the entire narrative."

Poverty is a serious issue, but Obama hasn't taken it seriously, if he or the Democrats have any idea how deal with it. Which, it should be obvious by now, they don't.

In his first year in office, Obama naively thought that if he threw enough money at unemployment, the economy would quickly recover.

But after $1 trillion or more in one spending program after another, the economy remained in intensive care for years and, even today, is still said to be in "recovery." The nation's persistently high poverty levels are but one of the recession's still-lingering illnesses.

Obama should have learned his lesson from President Lyndon Johnson's costly "War on Poverty" program in the 1960s. Billions of dollars were spent to eradicate poverty across the country through hundreds of programs, only to be abandoned as one of the costliest social failures of the 20th Century.

One of the supporters of LBJ's anti-poverty programs was the late Connecticut Sen. Abraham Ribicoff who later became one its severest critics.

"Our antipoverty efforts failed," the liberal Democratic lawmaker later wrote. "The philosophy of the 1960s -- to provide a vast array of services to the poor -- must be judged by results. There are 26 million poor Americans -- not because they lack social services, advice and counseling but because they lack money, the great equalizer."

"I started with high hopes. It sounded good. But when you analyzed what's been accomplished, the balance sheet indicates they have generally been failures," he told me later in an interview.

The poor need jobs, especially in our inner cities and urban centers, and that requires incentives to pour capital investment into start-up businesses. Instead, he has killed business investment by raising taxes on it.

Unemployed, unskilled, high school dropouts need entry-level jobs to get work experience, but such jobs are being eliminated in states that raised the minimum wage, just as Obama wants.
If you are looking for the root causes of poverty today, look no further than Obama's anti-growth, anti-job policies.

Obama won the presidency calling for higher taxes and promising to reduce poverty. He raised both.