If Iran Threatened To "Annihilate" Your Country, Would You Trust Them To Dismantle Their Nuclear Weapons? 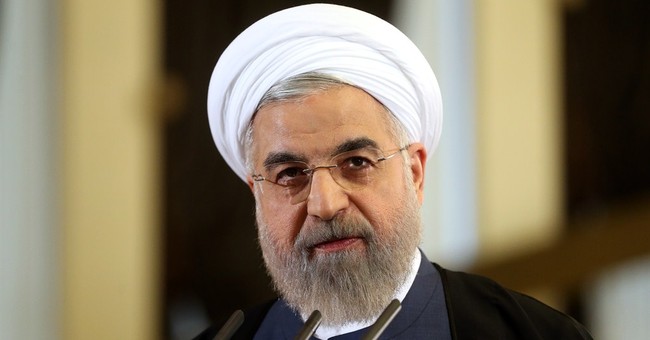 President Obama's eager negotiators have entered into a high risk deal with Iran to reduce its nuclear facilities that threaten one of its neighbors.

That neighbor is Israel, a tiny, feisty country that Iran's Supreme Leader, Ayatollah Ali Khamenei, says "has no cure but to be annihilated."

Faced with that level of hostility by Iran's highest official, one can understand why Israel and its supporters believe the agreement worked out last week by Secretary of State John Kerry is not worth the paper it's printed on.

While Khamenei did not attend the negotiations in Lausanne, Switzerland, he was part of the deal making process every step of the way.

"Khamenei had full knowledge of the provisions his country agreed to in its nuclear accord with world powers, a negotiator said," according to Bloomberg news service.

The pact's framework, which faces three more months of negotiations to hammer out the details, calls for sharply reducing Iran's centrifuges, restricting uranium enrichment for 15 years and allowing inspectors from the International Atomic Energy Agency to examine all of its sites.

In return, the U.S. has agreed to begin withdrawing its economic sanctions against Iran in little less than a year if it meets the terms of the agreement -- the critical reward for a country whose economy has been crippled by them.

But critics of the deal have plenty of reasons to distrust Iran who the State Department says is the world's "most active state sponsor of terrorism" -- arming terrorist militias across the Middle East, including Iraq, Syria and Yemen.

In Yemen alone, whose government has been toppled by rebel forces, Iran has been providing ethnic Houthis, a Shiite sect, with weapons, training and financing.

And with great success. After toppling the U.S.-backed government of President Abed Rabbo Mansour Hadi last month, the Houthis have seized control of major areas of Yemeni territory.

Iran's goal: To install an Iranian client state in Yemen that the Saudis fear would threaten their country's national security. The long unprotected border between Yemen and Saudi Arabia shows how likely that scenario has become as the war rages there, and that could easily explode into a broader regional conflict.

Let's not kid ourselves about Iran's goals. It already has effective control over several Middle Eastern capitals. Its Shi'a militant proxies are spreading throughout the region, stoking fears not only from the Saudis, but also in Egypt, Qatar, the United Emirates and others.

This is what triggered the Saudi air war in Yemen, joined by other Arab states who are now contemplating sending ground forces across its border.

Iran is a central aggressor in this widening war, feared and distrusted by its Arab neighbors who are under no illusion about its territorial ambitions.

Yet, incomprehensibly, Obama naively believes he can deal with Teheran, and even worse can trust them to abide by this agreement.

With less than two years left in his presidency, and his job approval polls locked in the upper 40 percent range, Obama is looking to improve his troubled foreign policy legacy. And he thinks the deal reached with Iran will do that.

But what if Iran is playing a cat-and-mouse waiting game in order to win suspension of the economic sanctions for a period of time. What if it reduces some of its centrifuges in the short-run, but secretly continues enough uranium enrichment and other behind the scenes work to develop a nuclear weapon?

What is there in Iran's behavior that makes the Obama administration so sure it can trust the Iranians to open all of its facilities to the Atomic Energy Agency's inspectors?

Or in Ayatollah Ali Khamenei's sinister record of arming terrorist armies throughout the Middle East?

More than anything, Iran wants to lift the economic sanctions that will unlock capital resources to further arm, train and finance its proxies in the Arab world. That, after all, was the reward that greased the deal for them.

"The political understanding with details that we have reached is a solid foundation for the good deal we are seeking," Kerry announced last week.

How can Kerry be so sure? As they say, the devil is in the details.

But also in the framework, too, says Senate Foreign Relations Committee Chairman Bob Corker (R-Tenn.) who expressed deep skepticism about multiple "red flags" in the agreement on Fox NewsSunday.

Such as what kind of iron clad, verifiable factors would need to be met before the international sanctions would be lifted.

"There's a lot of water that needs to go under the bridge here. Many, many details are unknown at this point," he said.

Israeli Prime Minister Benjamin Netanyahu called the agreement "a historically bad deal," adding that it was "a dream deal for Iran and a nightmare deal for the world."

The world has become a much more dangerous place in the Age of Terrorism, and for extremist groups such as al-Qaeda in the Arabian Peninsula and the Islamic State, the chief target, outside of the Middle East, is America.

But it would be the height of irresponsibility for Obama to ignore Iran's malevolent ambitions in the Middle East for the sake of a legacy-building deal.

Iran has never hidden its hatred toward Israel. But the question we need to ask now is whether that hatred is so intense, they would conceal the development of a nuclear weapon.