Obama's Giveaway Deal With Cuba May Hurt His Party in 2016 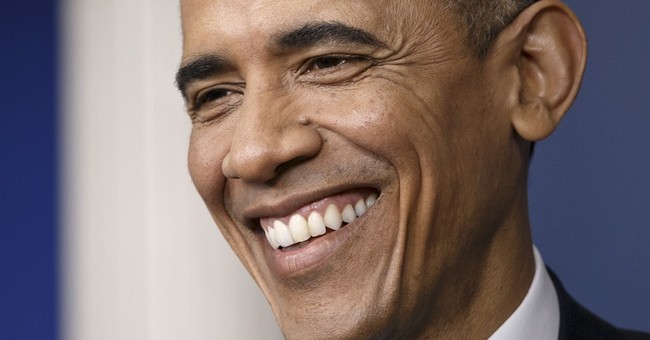 WASHINGTON -- Barack Obama continues to embrace low-tier, go-it-alone executive actions to pad out the last two years of his mistake-filled, agenda-less presidency in a hopeless hunt for a legacy.

His arrogant decision this week to re-establish diplomatic relations with Communist Cuba is the latest example of a president desperately searching for something to do without having to deal with Congress.

You can comb through all of the polling data for the topmost concerns of the American people, and renewing U.S. relations with Cuba's evil Castro dictatorship is not among them.

But with his job-approval polls in the basement, and his beaten party toppled from power on Capitol Hill, Obama is frantically looking for anything to turn his failed presidency around. So he went on nationwide television Wednesday to announce his latest diplomatic gambit, to remind us that he's still president.

National television? For a shameful giveaway deal with an aging tin-pot dictator in the Caribbean who got almost everything he demanded and conceded nothing in return?

Maybe someone in the White House suggested that this would be compared to Nixon's opening to China. It wasn't.

His actions drew fierce bipartisan criticism from Capitol Hill for making deep unilateral concessions without getting much in return. And it stoked the political fires in Florida, a pivotal electoral prize in the presidential elections, where Cubans account for a large share of the vote and remain strongly opposed to relaxing relations with the Castros and their revolutionary henchmen.

The administration won the freedom of Alan Gross, a former U.S. Agency for International Development contract worker who has been imprisoned for five years by the Cubans. But in return, Obama freed several convicted Cuban spies.

This will go down in Obama history as another naive attempt at diplomacy by a president who believes he can deal with dictators even if he gets little or nothing in return.

Remember that Obama came into office expecting to "reset" relations with Vladimir Putin and his Kremlin thugs, only to watch them seize the Crimea Peninsula and send troops into Eastern Ukraine, where they remain to this day.

Republican Sen. Marco Rubio of Florida sees the same naivete at work in Obama's olive branch diplomacy with Cuba -- calling the president "the single worst negotiator we have had in the White House in my lifetime."

"Appeasing the Castro brothers will only cause other tyrants from Caracas to Tehran to Pyongyang to see they can take advantage of President Obama's naivete during his final two years in office," Rubio said.

Even some Democratic leaders were incensed by the president's actions.

In a blistering statement Wednesday, Sen. Robert Menendez of New Jersey, the outgoing chairman of the Senate Foreign Relations Committee, said Obama's actions "have vindicated the brutal behavior of the Cuban government. There is no equivalence between an international aid worker and convicted spies who were found guilty of conspiracy to commit espionage against our nation.

"One spy was also convicted of conspiracy to murder for his role in the 1996 tragedy in which the Cuban military shot down two U.S. civilian planes, killing several American citizens," Menendez said.

To trade "Mr. Gross for three convicted criminals sets an extremely dangerous precedent. It invites dictatorial and rogue regimes to use Americans serving overseas as bargaining chips. I fear that today's actions will put at risk thousands of Americans that work overseas," he warned.

Obama may pay a bigger price for his actions when the Republicans take control of the Senate next month, and Rubio becomes the chairman of the Foreign Relations Committee's Western Hemisphere subcommittee.

In a statement released by his office, Rubio said he will "make every effort to block this dangerous and desperate attempt" to make sweeping concessions to the Castro government without demanding an end to its repressive policies that have put untold political dissidents in prison.

But in his zeal to play the role of global negotiator, even at the expense of appeasing some of America's worst and most dangerous adversaries, Obama may have hurt his party's chances in the 2015-16 presidential election cycle.

Of the nearly 2 million U.S. citizens who claim Cuban ancestry, the vast majority of them live in South Florida, a strategic political prize that could decide the outcome of the next election -- as it did in 2000.

While the younger generation of Cuban-Americans are more open to relaxing travel restrictions toward Cuba, the older generations remain deeply hostile to granting any concessions to the Communist government until it adopts democratic political reforms.

Like Rubio, one of the GOP's latest presidential wannabes wasn't buying it for a moment.

Former Florida governor Jeb Bush, who has just formed an exploratory committee for the 2016 presidential race, said on his Facebook page that the administration's decision to resume diplomatic ties with Cuba was "the latest foreign policy misstep by this president, and another dramatic overreach of his executive authority."

"It undermines America's credibility and undermines the quest for a free and democratic Cuba," said Bush, who is widely popular among Florida's Cuban population and the Hispanic community at large.

But on the left of the political divide, Hillary Clinton was buying into Obama's appeasement policy hook, line and sinker.

"I support President Obama's decision to change course on Cuba policy," she said. "Despite good intentions, our decades-long policy of isolation has only strengthened the Castro regime's grip on power."

Obama went for the whole enchilada, believing he can deal with Cuba by caving in to their demands. Republicans, and maybe more than a few Democrats, will remind him in a few weeks that Congress will have a say in this, too.