Obama as President and Legislature Signs His Own Bills Into Law 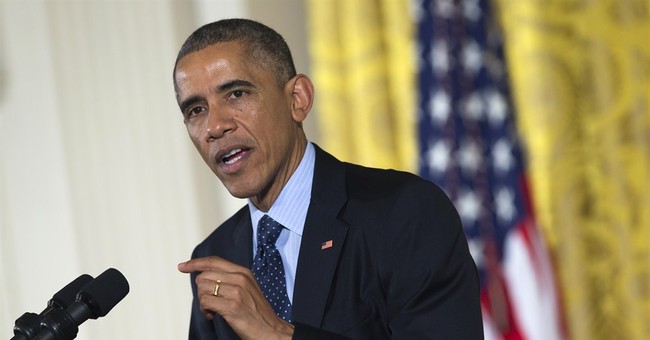 For all intents and purposes, Barack Obama's scandal-filled, deeply unpopular presidency is effectively over.

Yes, he'll still go through the political motions of being president during his last two years in office. But he is no longer seen, if he ever was, as a real chief executive who knows how to handle our nation's most pressing problems.

His latest bluff and bluster dismissed Congress as little more than an inconvenient impediment in our democratic system of government by both enacting and signing his own immigration laws.

A Wall Street Journal/NBC News poll released this week found that 48 percent of Americans disapprove of his go-it- alone executive action, versus 37 percent who approved.

In years to come, this will be seen as his darkest and most disgraceful hour. When he became so frustrated with his utter inability to deal with Congress (half of it controlled by Democrats), that he imperiously declared himself to be both legislature and chief executive to get the changes he wants on illegal immigration.

But let's be honest about Obama's motivation here. This is all about politics and the 2016 elections that will likely to reap big dividends for Democrats from the fastest growing minority voting group in the country.

Republicans are going to have to find a way to counter Obama's political gambit, but how they do that remains unclear right now until the GOP's presidential nominating race gets underway next year.

What is clear is that his presidency is now in ruins, as it faces a muscular conservative Republican Congress in his last two years in the Oval Office.

But the seeds of his collapsed presidency were planted well before he embarked on what will long be known as the worst violation of the Constitution's separation of powers doctrine since FDR dictatorially tried to pack the Supreme Court.

The hallmark of Obama's tenure has been one tawdry government scandal after another. In large part due to the political hacks he put in charge of his bureaucracies.

Veterans were cruelly denied timely care at the VA due to neglect and incompetence at the top. The IRS became a political arm of the Obama campaign. And the State Department, under Hillary Clinton, turned a deaf ear to the cries of a besieged consulate in Benghazi, Libya where our ambassador and three other Americans were killed.

Millions of Americans had their private health insurance policies cancelled because they did not comply with the rigid regulations under Obamacare.

America is in steep decline on a number of fronts as a result of his presidency and the wreckage extends across the country and throughout Obama's government.

Start with a sluggish economy where millions of of our fellow citizens were forced to suffer through the longest recovery since the Great Depression. Six years later many are still suffering from income stagnation and the dearth of good paying, full-time jobs.

It doesn't get any attention on the nightly news, but the U.S. labor force has been shrinking at a rapid rate, as prime-age workers -- between 25 and 54 years of age -- stopped looking for work because they couldn't find jobs.

The labor participation rate's numbers have fallen from 95 percent in 1973 to a low of 88 percent now. And it all has to do with bad economic policy, Obama's policies.

"The American dream is disappearing before our eyes -- not because people don't work hard. It's because of the way we've structured the system," says Michael Porter, director of the Institute for Strategy and Competitiveness at Harvard's Business School.

"The jobs that are a path to the American dream are few and far between. And that's because of high corporate taxes," he told the Washington Post. You won't hear that from Obama -- ever.

When the Republicans won the House in 2010, they went to work on tax reform to cleanse the tax code of a raft of loopholes while also lowering the tax rates.

Rep. Dave Camp, R-Mich., the chairman of the Ways and Means Committee, found a Democratic ally in then-Sen. Max Baucus who chaired the tax-writing Finance Committee. And, suddenly, the possibility of tax reform improved.

Unfortunately, Democratic Majority Leader Harry Reid opposed any tax cuts, and the president never warmed to the idea, either. But to make sure it went nowhere, Obama appointed Baucus to be the new ambassador to China, a move that killed any chances of job-creating tax reforms.

Baucus later admitted in his confirmation hearing that he knew nothing about China, but the Democrats swiftly approved his nomination anyway. This is what called they called "good government."

As things stand now, however, the president, his party and their big government, tax-anything-that-moves agenda are in ruins -- thanks to an aroused and angry electorate.

Rep. Paul Ryan, R-Wis., will become the new chairman of the tax-writing Ways and Means panel, and Sen. Orrin Hatch, R-Utah, who never met a tax cut he didn't like, will chair the Finance panel.

But pro-growth, pro-investment tax reform will likely run into stiff opposition from Obama, who's given it lip service but has never proposed a plan of his own. He insists that any tax changes must yield higher revenues to spend on additional infrastructure projects.

And we know how well that worked under Obama's first $1 trillion economic stimulus program, don't we.

Right now, all attention is focused on the Republican Congress in January, and what it can get done with a president who opposes everything the GOP stands for: Lower, job-creating tax rates, pruning back a bloated, wasteful budget, authorizing completion of the Keystone XL pipeline, expanding U.S. exports, replacing Obamacare with something better.

More than likely, we're in for two more painful years of divided government and a lot of vetoes. But it will also give Republicans a chance to show voters what kind of reforms they can expect if the GOP wins back the White House.