Hillary's Biggest Whopper: "I am Not an Obama Clone" 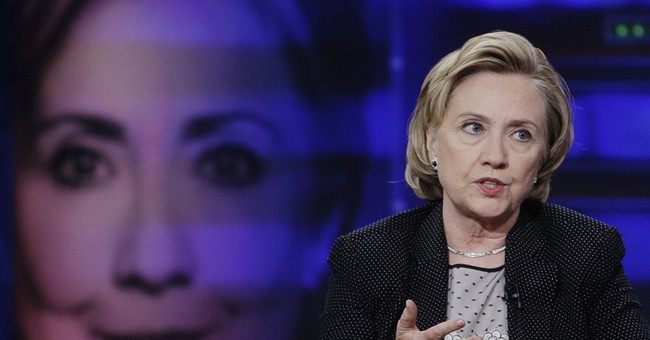 WASHINGTON - We haven't heard the last of Hillary Clinton's attempts to separate herself, and her expected presidential candidacy, from Barack Obama's policies.

Her stinging put down of Obama's impotent foreign policies in Iraq and elsewhere were just the beginning of a carefully plotted campaign to persuade enough Americans that she's not an Obama clone.
From the beginning, the number one problem that faced her long-planned candidacy is that she would follow in the footsteps of a failed presidency. Indeed, she could already hear the Republicans' 2016 campaign cry: "If you liked the Obama administration, you'll love what Hillary wants to do."
Clinton's politically choreographed remarks earlier this week, in an interview with the Atlantic magazine, were but the first of many artful dodges to come.
Dredging up Obama's long-forgotten description of his strategic foreign policy as "Don't do stupid stuff," she shot it down with this well-executed attack line:
"Great nations need organizing principles, and 'Don't do stupid stuff' in not an organizing principle," she said.
Clinton, whose timid, vacuous, super cautious record as secretary of State was mediocre at best, disgraceful at its worst, is the last person to talk about organizing foreign policy principles.
CARTOONS | Tom Stiglich
View Cartoon
She made a lot of speeches around the globe, and it is reported that she disagreed with Obama's escalated pull-out from Iraq and the way it was carried out. But she was loyal to his misguided policies, carried them out, and now is squirming over having to defend them.
Still, her record on foreign policy matters is not one that that demonstrates she's ready to make foreign policy as the nation's chief executive.
Let's start with the scandal in Benghazi, Libya, where the U.S. ambassador and and three other Americans were killed in the Consulate there in a full-scale terrorist attack. After a thorough investigation, the record shows her State Department ignored numerous pleas from the ambassador for added security there.
The larger scandal that followed was made worse when her State Department's initial response to the well-planned attack blamed it on a protest over an anti-Islam, YouTube video that, in its words, "got out of hand."
Months later, when Clinton was called to testify before the Senate Foreign Relations Committee about the deadly events, she delivered her "What difference does it make" line that will haunt her future presidential campaign.
When she was running for president against Obama in 2008, she went after his inexperience in a TV campaign ad about the White House crisis phone ringing in the middle of the night and who was there to answer it.
"There's a phone in the White House and it's ringing. Something is wrong in the world. Your vote will decide who answers that call. Whether someone knows the world's leaders, knows the military, someone tested and ready to lead. It's 3 a.m. Who do you want answering the phone?" the ad says.
But when U.S. Ambassador Chris Stevens was calling on Hillary for added security in the face of growing terrorist threats, she didn't pick up the phone to help him.
She was too busy jet-setting around the world, chasing former Secretary of State Condoleezza Rice's record of logging more miles than any previous secretary of state.
But what did Clinton accomplish over the course of her empty-handed, four-year term in office? The Middle East is a fiery, blood-soaked battleground. Al-Qaeda terrorists and their spin-off armies are on the brink of seizing control of Iraq and Afghanistan, making inroads in Syria and across North Africa. Vladimir Putin has seized Ukraine's Crimean peninsula and threatens yet another military push into that war-torn country's eastern half.
Now, as Clinton continues her book promotion tour, she is attempting to divorce herself from that record, avoiding the key question of what did she do in the world of foreign relations to make the world a better place?
It is reported that she called Obama after the interview to apologize, but she isn't backtracking on her criticism of his strategic policy positions.
She was in Martha's Vineyard Wednesday -- where the president is on a two week vacation -- for a book signing at the Bunch of Grapes Bookstore and planned to attend a private party fundraiser there. When she was asked at the bookstore if she disagreed with Obama's handling of the crisis in Iraq, she merely replied, "I'm excited about signing books."
When asked about their relationship, she said, "We are committed to the values and the interests of the security of our country together. We have disagreements as any partners and friends, as we are, might very well have."
But those disagreements likely run far deeper that may be evident right now.
There are some here who say that Clinton has serious problems with Obama's economic policies. She has built strong political alliances on Wall Street and is said to think that major policy changes are needed to boost economic growth and job creation.
When she and Obama were running against each other in the party primaries, one of her key advisers told me she did not agree with Obama's call for raising taxes while the economy was still in a recession.
But it remains to be seen what her ultimate views are on a wide range of these and other domestic issues, and how they could impact on her candidacy in the remaining two plus years of Obama's presidency.
One thing is clear, however. No matter how much she tries to politically divorce herself from Obama's policies, her chances of winning the White House will be affected by them.
What if Obamacare collapses financially because it has not signed up enough younger, healthier people? Or an uneven economy and job market worsens in the months to come? Or the rise of global terrorism poses a much more lethal threat to the U.S.?
That's when Americans will rise up and say, we've had enough of the Democrats. It's time for a change.