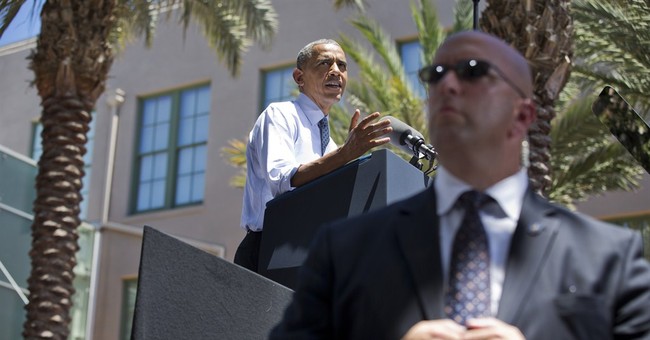 WASHINGTON - Barack Obama has been saying that Americans are doing a lot better than they were before he was sworn into office in 2009.

It's a claim he's been repeating everywhere he goes, at party fundraising events and in nearly every interview he's had in recent months.

"There's almost no economic measure by which we are not better off now than we were when I took office," he told Democrats earlier this month at a campaign fundraiser in Dallas.

"We are indisputably better than when I was elected," he says.

It's a fundamentally specious, slippery and exaggerated claim that contains more holes than than a pound of Swiss cheese -- a defensive political ploy that asks Americans to ignore the painfully sluggish, job-challenged economy that he's put us through for the past six years.

He took office in the midst of a severe recession when just about all of the relevant economic data was bad, from soaring unemployment to a shrinking economy.

But the average length of time it has taken our country to emerge from post-war recessions has been about two years. We are in the sixth year of the so-called Obama recovery in which the economy's performance is still being widely called "mediocre," "sluggish," "disappointing," "sub-par," "uneven" and "weak" in countless newspaper reports across the country.

"I don't think the facts on the ground merit anybody spiking a football and celebrating," economist Douglas Holtz-Eakin says about Obama's boastful claims.

Indeed, this year began with the nation's economic growth rate actually shrinking in the first three months by 2.9 percent, a shocking plunge that the administration blamed entirely on the winter weather.

It was the economy's worst first quarter performance since 2009, the U.S. Commerce Department said, though the second quarter was expected to be better, economists said this week.

But the fact of the matter is that U.S. economic growth under Obama has been at a meager 2 percent annual rate for sometime now, which no economist worth his or her salt would say is worth cheering about.

Democrats say slower economic growth is the "new normal" in the Age of Obama, but wiser economists dismiss that as pure bunk.

"Since 2000, GDP growth has averaged 1.7 per year, whereas during the Reagan-Clinton years, it was 3.4 percent," says University of Maryland business economist Peter Morici.

Obama points to the Labor Department's unemployment rate of 6.1 percent as proof that more Americans are a lot better off under his presidency. But there are a number of reasons to doubt the government's figures.

The decline in the official unemployment rate is in large measure due to millions of discouraged, long term jobless Americans who have quit looking for work and thus are no longer counted among the unemployed by the Bureau of Labor Statistics.
Friday's Bureau of Labor Statistics report was expected to show the economy created 235,000 jobs in July, with the jobless rate holding at 6.1 percent. "But that hardly tells" the full story, Morici says.

Many Americans who want and need full time jobs "are stuck in part-time positions...at lower wages" which a lot of businesses find more preferable. Obamacare's employer health insurance mandates will not apply to workers on the job less than 30 hours a week," he says.

When you add discouraged adults, who say they'd look for work if the economy improves, to part-time people who want full-time jobs, "the real unemployment rate becomes about 15 percent," Morici says.

Another huge hole in Obama's self-serving claims has to do with the extraordinary lengths the White House, and its friends in the news media, exaggerate the significance of the nation's monthly job numbers.

"The economy has created only about 6 million new jobs during the Bush-Obama years, whereas the comparable figure during the Reagan-Clinton period was about 40 million," Morici reports.

As for Obama's preposterous claim that Americans are "better off now than we were when I took office," Gallup's polling data suggests otherwise.

If the White House needs further hard evidence of how the American people view the Obama economy right now, they should take a look at the survey data Gallup released Tuesday showing that economic confidence was "down sharply."

The Index measures what Americans think of the U.S. economy now and whether they think it is getting better or worse.

If Obama truly believes Americans have never had it so good since he took office, he's been talking to the wrong people. He's presided over an underperforming, slow job growth, declining income economy, according to just about every available economic measure.