Obamanomics: "A Fiscal Catastrophe in the Making" 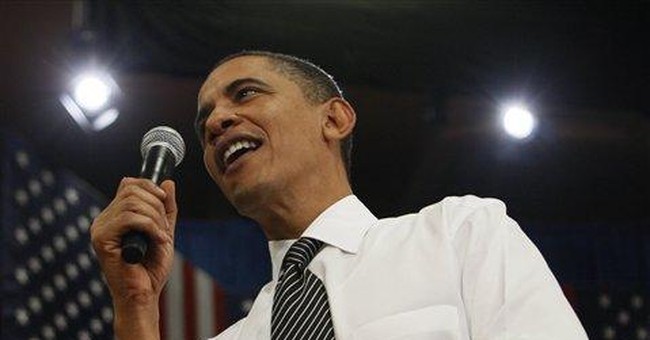 WASHINGTON -- If President Obama thinks the political disaster that hit his party last month in Massachusetts was bad, he had better brace himself for the Congressional Budget Office's latest economic forecasts for the next two years. In testimony before the House Budget Committee last week, which got scant news media attention, CBO Director Douglas Elmendorf painted a bleak forecast for the nation's economy under the White House's no-jobs, no-growth tax-and-spend policies. It spells even deeper political losses for the Democrats in Congress than are presently forecast.

Elmendorf, who was appointed by Democratic congressional leaders, told the committee that economic growth will be painfully slow over the next several years, which will keep the national unemployment rate at an average of 10 percent throughout fiscal 2011, which ends in September of that year.

Contrary to Obama's Herbert Hoover mantra that economic recovery and more jobs are just around the corner, the CBO budget chief said the economy will grow by a weak 1.6 percent this fiscal year and the jobless rate will average 10.2 percent.

CBO's outlook for 2011 is just as bleak. The nation's gross domestic product (GDP), the measure of its economic growth, is expected to barely reach 1.8 percent, while unemployment will show little or no improvement: averaging 9.8 percent for that fiscal year.

The administration's unprecedented budget deficits are expected to be more than $1 trillion this year and the next, and stay at very high levels for years to come.

Deficits such as these mean that the government's massive debt burden will be at historically dangerous levels that will imperil our country's future and our economy's solvency, he said.

"It is true that as we push (public debt levels) in this country to 60 percent of GDP at the end of this year and beyond that over the next few years, we're moving into (debt) territory that most developed countries stay out of," he told the committee.

If we continue this profligate level of spending, "that raises the risk" of serious economic consequences for our country, he warned.

But Elmendorf isn't the only one sounding the alarm over the Obama administration's binge spending and no-growth economic policies.

"We are presently in a dangerously risky economic environment, more risky than any in memory and that includes the 1970s," Stanford economist John Cogan told me.

"The primary sources of that risk come from uncertainty about U.S. government economic policy. In the area of taxation, personal income taxes -- especially those on savings and capital formation -- are set to rise substantially in a year (when the Bush income tax cuts are due to expire)," Cogan said.

"How high tax rates will rise and what activities will be hit hardest creates a sizable risk this year for investors and businesses," he said.

But perhaps the most ominous forecast of what we can expect from Obamanomics comes from famed economist Arthur Laffer, whose supply-side, tax-cut proposals under President Reagan put the economy on a nearly 25-year economic-growth trajectory that pounded unemployment to its lowest level in decades.

The famed creator of the Laffer Curve -- which showed how lower tax rates boost economic growth (and ultimately tax revenues) -- said the economy is now heading toward "a train wreck" in 2011.

Don't be fooled into thinking the economy is coming out of the woods this year, he said. Unlike most of Obama's economic critics, he thinks we will have modest growth this year, but a sharp decline in 2011.

The chief reason: "In anticipation of known tax increases, the economy will shift income and output from 2011 -- the higher tax year -- into 2010 -- the lower tax year. As a result of this income shift, 2010 will look a lot better than it should, and 2011 will be a train wreck," he predicted.

Despite Obama's State of the Union declaration that he has not raised taxes on anyone, Laffer pointed out that we are on track for a lot of tax hikes this year: "In 2010, the U.S. will have a payroll tax rate increase, an estate tax increase and income tax increases. There's also a tax increase in 2010 on carried interest" that will rise from 15 percent to 35 percent and rise still more in 2011, he said.

"Whenever a country is in the throes of spending too much and raising taxes, it's a fiscal catastrophe in the making, and this is what is happening now," Laffer said.

All of this makes Obama's tax-cuts claim in Wednesday address before a joint session of Congress sound disingenuous at best: "We cut taxes. We cut taxes for 95 percent of working families," he said.

If you do not remember those lower- to middle-income tax cuts in your paycheck last year, it's because they were so minuscule and so spread out over the course of the year "that many are unaware they received it," the Washington Post correctly pointed out last week.

Meantime, Obama's spending freeze proposal is a sham, affecting only a tiny sliver of the budget, and, by the way, it wouldn't take place until 2011 after the midterm elections. That is, if Congress adopts it. Lawmakers say that under his plan, spending will still rise by 44.3 percent instead of 45 percent over the next 10 years.

That's why the recent GOP victory in Massachusetts was barely a tremor for the Democrats compared to the real disaster that's coming in November.