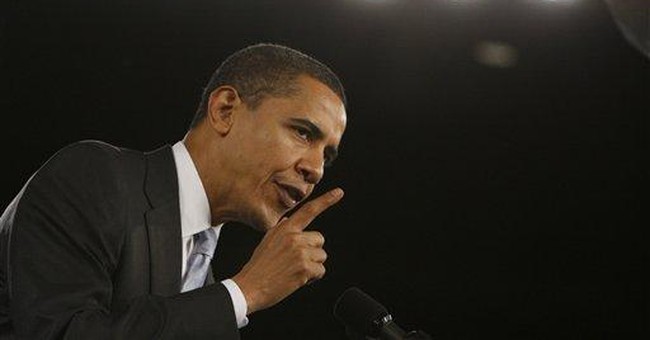 WASHINGTON -- President Barack Obama seems unwilling to acknowledge that reasonable and principled people oppose his stimulus bill because they believe another approach will yield significantly better results. Throughout his Monday-night news conference, the first of his presidency, he falsely characterized the plan's Republican opponents as people who preferred to "do nothing versus do something."

Now there may be a few GOP members of Congress who fit that description, though they are a tiny number, but anyone following the very loud and heated debate in Congress knows that the loyal opposition has a full-blown plan of its own, heavily weighted on tax cuts.

They certainly have acknowledged that we are in a serious recession and they, like Obama, think the government has to take action to get this economy growing again. But he was unwilling to grant Republicans due recognition that they just have honest policy differences.

Now he may disagree with what the Republicans are proposing, but don't tell us that they are not proposing anything or suggest that they do not recognize the seriousness of the economy's troubles. It is disrespectful and suggests he is unwilling to engage them in the kind of dialogue he has said many times that he welcomes.

There were several other things Obama said in his news conference -- in which he gave an exhaustive defense of his economic-recovery plan -- that just were not true. Others were just preposterous understatements, such as his remark that the actions Iran has taken in recent years were "unhelpful."

This is an evil regime that was providing terrorists in Iraq with roadside bombs that killed many of our troops. Surely such behavior cries out for a stronger description than "unhelpful."

Several of his observations about the economy especially struck me as over the top.

The first: His belief that there is nearly unanimous agreement among economists that his $825 billion plus spending plan is the only way to get our economy moving again. There are many economists who question the efficacy of a massive public-works spending plan because it has failed whenever it has been tried. The Cato Institute has been running full-page newspaper ads that list close to a hundred top college and university economists who say his plan will not work.

Economists in many prestigious think tanks such as the Hoover Institution, the American Enterprise Institute and the Heritage Foundation have published many studies pointing out its flaws.

The nonpartisan Congressional Budget Office is critical of it, too. One CBO study showed only a fraction of the stimulus money would be spent by the end of this year, and perhaps only half by 2010 when it is quite likely the recession will be over. Jason Furman, Obama's campaign economist, said last year that infrastructure spending was one of the "less effective" stimulus plans.

Obama's claim that his plan will preserve or create nearly 4 million jobs came from a memorandum by two of his economic advisers, Jared Bernstein and Christina Romer. The memo noted, however, "that all of the estimates presented in this memo are subject to significant margin of error."

Throughout his news conference, the president went to great pains to characterize this recession as the worst ever. No one doubts its ferocity, but is this really "the worst economic crisis since the Great Depression" or "an unprecedented problem," as he described it Monday night?

As for the debate over whether spending massive sums of borrowed money will jump-start the economy, Obama said that was an issue we had "resolved a pretty long time ago" under the New Deal.

But for all the New Deal spending on public-works projects, the jobless rate near the end of the 1930s stood at around 19 percent, according to the U.S. Department of Labor, Bureau of Labor Statistics.

Sadly, no reporter at Monday night's press conference asked Obama to point to one place or time where his plan had worked before. Ironically, he mentioned Japan's painful experience throughout the 1990s when it tried one public-works infrastructure-spending plan after another. But he did not connect the dots. Japan spent hundreds of billions of dollars, but without any improvement in its economy for the entire "lost decade."

There's a painful lesson to be learned there, but one that Obama and his economic advisers refuse to acknowledge.