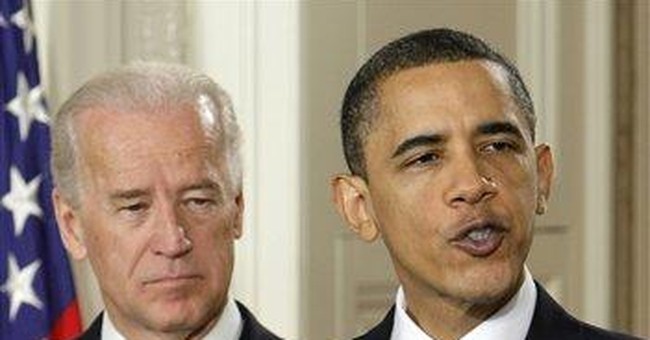 Let's begin our reaction to the passage of Obamacare by remembering Winston Churchill's famous formulation with which he introduced his war memoirs:

Now is the time for defiance! Here's what we must do:

1) Restore the Medicare cuts mandated in this bill. Block the reduction of physicians' fees by 21 percent scheduled to take effect this fall. Override the cuts in Medicare that require annual approval by Congress. Challenge the Democrats over each and every cut. Try to peel away enough votes to stop the cuts from driving doctors and hospitals to adopt the course already taken by the Mayo Clinic in refusing to take Medicare patients.

2. Defeat the Democrats in the 2010 election! Start with the traitors who voted no in November and then switched to a shameful yes when it counted in March. Then go on to win the open seats in the House and Senate. And then fight to replace as many Democrats as possible. Remember: Any Democrat who voted no would have voted yes if they had needed his or her vote. The only way to repeal Obamacare is to vote Republican.

3. Defund. Once we get the majority in both chambers, defund appropriations for the Obamacare program. The bill passed by the Congress and signed by the president is simply an authorization measure. Funds must be appropriated for it each year by Congress. Through zero funding these changes, we can cripple them before they take full effect.

4. Repeal. And, once we defeat Barack Obama, we need to proceed to repeal this disastrous plan before it can ruin our health care system. Then, we must replace it with a Republican alternative that relies on the marketplace, tax incentives and individual responsibility to provide health care to all Americans.

Above all, we must finally learn the fundamental lesson this political process we have been through has to teach: that there is no such thing as a conservative or moderate Democrat. Blue dogs don't exist in real life. Only yellow dogs.

The days when there were Democrats who refused to follow their radical left-wing party line are over. There are no longer "state" Democrats who vote conservative as opposed to "national" Democrats who vote with the left. They are an extinct species. Some senators and congressmen capitalize on our memories of those days and pretend to be moderates. But they are just faking it.

Nancy Pelosi knew -- as Harry Reid knew in the Senate -- that she had the potential support of every single Democrat in her chamber if only the price was right. The sole difference between moderate and liberal Democrats is their asking price. Moderates require slightly higher bribes to assure their votes.

There are only two kinds of congressmen or senators: Democrats and Republicans. We have had a national education, and it's time to learn from it. In days gone by, intelligent people liked to say that they voted for the person, not the party. Now those who say this are fooling themselves. There is only party! The most conservative Democrat is way to the left of the most liberal Republican.

The Democratic victory on Obamacare will prove the most expensive in the party's history. It will lead to the eradication of their majority, the defeat of more than 50 of their congressmen, the switch of Senate control and Republican domination for decades. And, in the end, it will have done nothing to improve health care. But, fortunately, we can win the 2010 election to stop it from doing much damage.