On Student Loans, Obama Is Right 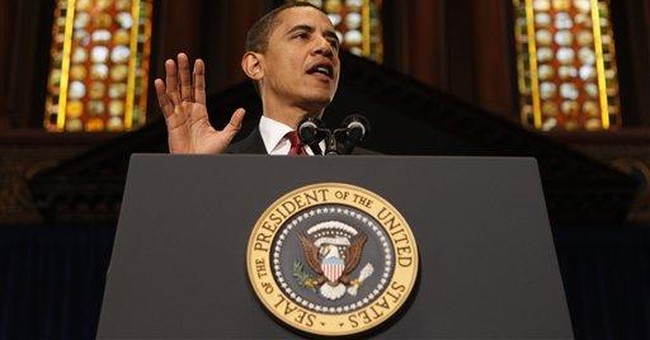 If your philosophy is that government can do everything better than the private sector, eventually you'll luck out and hit one area where that otherwise nutty philosophy happens to be true. President Obama's plan to end private student lending and channel all loans through the direct federal program is the right way to proceed.

Ever since Bill Clinton initiated the direct student lending program, it has offered lower-cost loans to students and given them an alternative to the high-handed rip-offs to which they are exposed when the funding comes from private lenders. The special interests -- particularly Sallie Mae, the leading student lender -- forced Clinton to allow private lending alongside the government program. Now Obama is trying to eliminate it. And wisely so.

This issue has nothing to do with growing government. The taxpayer already subsidizes the interest rate and guarantees the loan, whether through direct public lending or private firms. The issue is: Should the lenders make a profit, or should the student pay a lower interest rate?

Private lenders charge more than the government does in interest and are particularly vicious in their collection practices. Even though the government pays them 97 percent of the principal and interest should a student default, the lenders vigorously pursue collection, since they get to keep more than half of whatever they get even after the feds have repaid them for almost the full value of the loan. These loans, which are not dischargeable in bankruptcy, may not be refinanced. Once you take out the loan, you are stuck, even if interest rates should drop decisively.

And the private student lending industry has been rife with corruption, as various lenders give personal gifts and philanthropic donations to colleges and universities in an effort to encourage them to steer needy students to private, not public, loans. This corruption has been exposed repeatedly by both former New York Attorney General Eliot Spitzer and the current A.G., Andrew Cuomo. Of course, the private lenders pay bribes to get college financial aid officers to recommend to unknowing students that they borrow from them. Why else would a kid pay more interest to get a private loan than a public one?

Particularly interesting is Obama's plan to recycle the savings from replacing the private program with a public one into the Pell student grant program. With almost $100 billion in savings projected over the next decade, the tradeoff is very attractive.

To battle against Obama's program, the private lenders have hired former Clinton Deputy Attorney General Jamie Gorelick to lobby against it. Gorelick has great credentials to fight for Sallie Mae. She sat on the board of Fannie Mae (no relation) as it piled up billions in subprime lending obligations and got out in time to collect millions in bonuses.

Before that, she made sure that the left hand did not know what the right hand was doing in the Justice Department anti-terror investigations. As a result, we could not open the laptop computer of the 20th hijacker and did not get the wire transfer data it contained for the other 19 hijackers until after 9-11. Now, she is capping off that brilliant career by trying hard to make kids pay more for college.

Republicans and some Democrats -- who are beholden to Sallie Mae and other private lenders for their generous campaign contributions -- will try to pretend that this issue is one of big government vs. small government. It is not. The issue, in its starkest terms, is high college costs vs. somewhat lower costs. Our kids, and their parents, deserve a break.