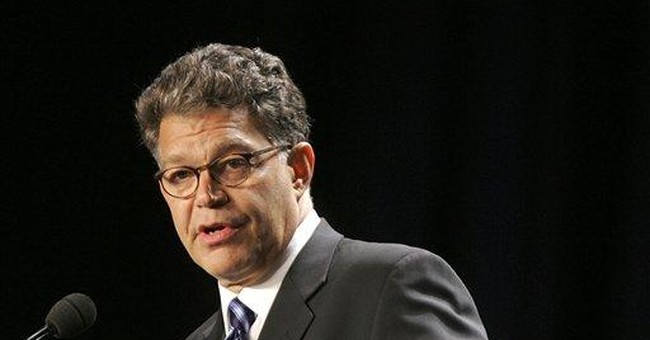 As John F. Kennedy once said, "sometimes partisanship demands too much." Watching Al Franken and the Democrats steal this election, vote by vote, is a horrific sight that makes a mockery of the electoral process, the fundamental element in our democracy. If this travesty is allowed to stand, it essentially means that any close election constitutes an open invitation to try to steal the victory.

We must not permit the Minnesota Democrats to get away with this election heist. The Republican National Lawyers Association is litigating the issue and needs all the support they can get to fund their court case.

The recount actually wants to count ballots in twenty-five precincts that would bring the total of votes cast higher than the actual number of people who voted! In Ramsey County, 177 more votes have been counted than people who voted on Election Day. The canvassing board, in effect, is admitting that it is counting fraudulent, duplicate ballots! In some cases absentee ballots, particularly from troops serving overseas, have been counted. In other cases, not. One ballot, on which Franken was crossed out and replaced by "Frankenstein" was counted as a Democratic vote.

Apparently, when a ballot was challenged, a copy was made to facilitate examination. But, in many cases, the canvasser failed to label the ballot as a duplicate. Then, in the recount, all the ballots were counted, ensuring that the challenged vote was not only counted, but counted twice.

What makes all of this suspicious in the extreme is that each of these errors inured to Franken's advantage and eroded Coleman's election night lead until the Democrat could claim victory.

At the same time that the Democrats are getting away with their chicanery in Minnesota, Governor Rob Blagojevich is succeeding at appointing the successor to Obama in Illinois. The success of his appointment was inevitable once the Illinois Legislature, again with a heavy Democratic majority, refused to order a special election for the vacant Senate seat. So afraid were they that the Republicans might win the special balloting that they would rather let Blagojevich make the possibly corrupt appointment than give the voters the chance to make the decision.

We now will likely never know if the new Senator Burris complied with Blagojevich's fantasies and actually paid for his seat in the Senate. But the very fact that we have the Governor of the state on tape preparing to make such a demand of whoever he appointed should give us pause. That Illinois' Democrats would rather have us speculate than give their voters the franchise is as revolting, in its own way, as the Great Minnesota Senate Seat Robbery.

Mark Twain said that people should never have to see sausage being made or a law being passed. Add to that a recount in progress.