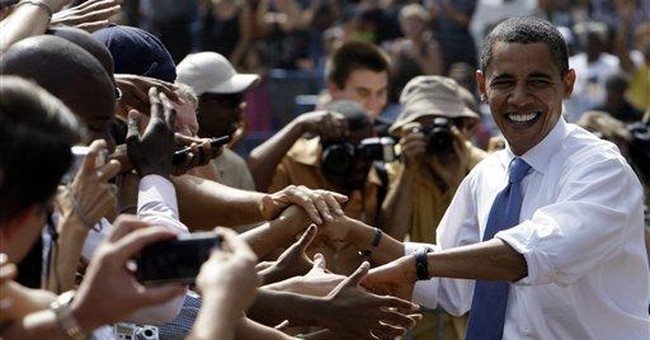 As the election enters its last two weeks, social populism wars with economic populism to become the major outlet for American anger and angst and to satisfy the demand for change. In his book The Populist Persuasion, Michael Kazin articulates the difference between these two types of populism: economic and social.

Economic populism, the staple of the Democratic left, demonizes Wall Street and glorifies Main Street. It rails against unequal distribution of wealth and warns, perpetually, that the rich are getting richer and the poor are getting poorer. From Andrew Jackson’s frontier democracy to Lyndon Johnson’s War on Poverty, economic populism has powered the left.

Social populism, the conservative reply, attacks the values of Hollywood and the intellectual elite. It criticizes the welfare state and opposes a redistribution of wealth from the hardworking and deserving to what it sees as the freeloaders. More recent in origin, social populism has its roots in abolitionism and Prohibitionism and achieved its modern form in Richard Nixon’s silent majority, Jerry Falwell’s and Pat Robertson’s Christian Coalition and Ronald Reagan’s new right-wing majority. Within the Republican Party, social populists oppose the country-club wing and emphasize social conservatism over economic austerity.

In recent years, both forms of populism have been in remission. Clinton’s policies of triangulation and Bush’s lack of focus on domestic issues have steered both parties away from either economic- or social-populist impulses.

But the Obama campaign has been, from the beginning, grounded in economic populism. His explicit attack on the Bush tax cuts “for the rich” and his promise to make them “pay a little bit more” resonated with economic-populist voters. When the Wall Street crisis hit and top executives fled failing companies, taking hundreds of millions of dollars with them, the economic populists powered Obama to a nine-to-10-point lead in the polls.

But meanwhile, social populism was making a comeback on the right. Initially galvanized by Mike Huckabee, the social populists went wild when McCain chose Sarah Palin for vice president. Palin’s life story epitomized the values of social populists. Her opposition to abortion, her mothering of a special-needs child, her backing for guns and her robust crusade for energy sources brought mainstream Republican values to the McCain ticket. If McCain wins this election, which he might well, it will have been the social populism of Sarah Palin that engineered much of his comeback.

When the financial crisis broke, McCain and Palin attacked corporate greed and called for restoring values on Wall Street. But their critique seemed merely a faint echo of the outrage of the left’s economic populists.

Then came Obama’s conversation with Joe the Plumber, possibly the decisive moment in the election. His blunt, blue-collar criticism of Obama’s proposal to “spread the wealth around” found immediate resonance among social populists. Where economic populists want to take from the undeserving, overfed rich and give to the needy poor, social populists decry taking from hardworking, thrifty citizens and giving to illegal immigrants and the self-indulgent lazy.

At last, the McCain camp has something to say. Finally, it has, in McCain’s phrase, “nailed Jell-O to the wall” and found a way to attack Obama’s tax plans and support for social engineering and income redistribution.

It is true that the richest Americans are getting richer a lot faster than the rest of the country. The top 10 percent experienced a real (after inflation) income growth of almost 50 percent in this decade. The rest of America saw its income rise, but by less than 5 percent after inflation.

But it wasn’t Bush tax cuts that fueled the growing inequality. The top 1 percent of American taxpayers now pay 40 percent of the taxes (compared with 33 percent in 2003 and 24 percent in 1986).

Obama’s proposed increase in taxes on the rich will kill the economy and send us into a deeper depression.

But Clintonian policies like expanding the earned income tax credit, stretching out eligibility for food stamps and Medicaid, and funding college scholarships can make a huge difference. How will we pay for them? By keeping taxes on the rich at their current levels and using growing tax revenues to pay to promote downward irrigation of wealth.

Politically, the unalloyed triumph of economic populism is at an end. Social populism is back in play. And may the best populism win.