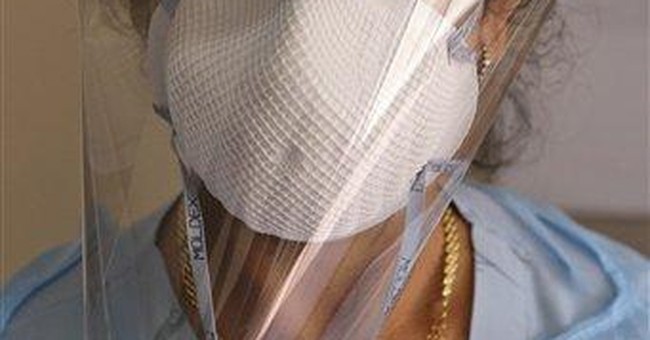 I don't get why "swine flu" equals worldwide pandemonium while the generic flu that kills hundreds of thousands of people every year is a non-event. But OK, the experts do, which is why I guess the Obama administration has kicked into pandemic-prevention mode, declaring a full-blown "national health emergency." But if the administration talks up the emergency, how seriously, really, is it taking the emergency?

Let's review. Scores of deaths in Mexico are attributed to "swine flu." Check. A New York City school becomes a swine flu hotspot after students return from Mexico. Check. The United Sates declares a "national health emergency" on Sunday. Check. Also on Sunday, Homeland Security Secretary Janet Napolitano notes that travel advisories have not been issued by the State Department, nor is the United States going to screen passengers on flights arriving from Mexico.

Not check. While the U.S. government went ahead and issued a travel advisory on nonessential travel to Mexico on Monday, it has still in no way restricted travel from Mexico, not even for a day or two to assess the path and scope of the outbreak. This is why at the end of Swine Flu, Week One, the first line of flu defense at the U.S.-Mexican border are American bus drivers spraying their buses with cans of Lysol.

There is something screwy going on. It started with the unfathomable official insistence from the get-go that closing the border on a pandemic emerging in Mexico was pointless even as the same officials simultaneously declared their ignorance on the nature and potential of the contagious new bug. But why curb nonessential travel into the hot zone, as the U.S. government ultimately did, without curbing nonessential travel out of the hot zone? It didn't make sense. But this is the position that became policy. "At this point, (health officials) have not recommended a border closing," President Obama said at his Wednesday press conference: "From their perspective, it would be akin to closing the barn door after the horses are out, because we already have cases here in the United States."

Well, relatively few cases here in the United States, Mr. President, with some significant number of them having come in via Mexico. If public health is the overriding concern, why guarantee more such "horses" keep coming? If, indeed.

"Closing the border would yield only very marginal benefits," Napolitano told the Senate on Wednesday. "At the same time, closing the border has very high costs." Aha: benefits versus costs. What did Napolitano mean? Such costs, as she told NBC, include the "thousands of trucks and lots of commerce that cross that border." Does that mean that blocking the path to market for, say, Mexican-grown strawberries isn't worth the "very marginal benefits" of potentially saving American lives? Chilling thought.

The World Health Organization, as of this writing, isn't issuing travel advisories to affected areas for similar non-health reasons. "Border controls do not work. Travel restrictions do not work," WHO spokesman Gregory Hartl insisted early in the week, as reported by Fox News. Referring to the 2003 SARS outbreak, during which WHO actively discouraged nonessential travel to cities including Hong Kong, Beijing and Toronto -- a move, Fox notes, that world health experts say "sharply cut the spread of SARS"-- Hartl added: "There was much more economic disruption caused by these measures than there was public health benefit."

This is getting downright creepy. In whose opinion was there more "economic disruption" than "public health benefit" -- the people who didn't fall victim to SARS or the people who mourned temporarily lower profits? And why does what is ostensibly a global health organization weigh the bottom line more than, well, global health? It seems that our leaders, both domestic and global, are attaching greater importance to potentially lost revenue than to potentially lost people.

WHO Director-General Margaret Chan let it all hang out: "By definition, pandemic influenza will move around the world. ... Does that mean we are going to bring the world's economy to a standstill?" Nice bedside manner, that. Little wonder China, certainly a proponent of keeping the world's economy moving, "extended full support" when Chan was a candidate to lead WHO.