Is This the Job of the President of the United States? 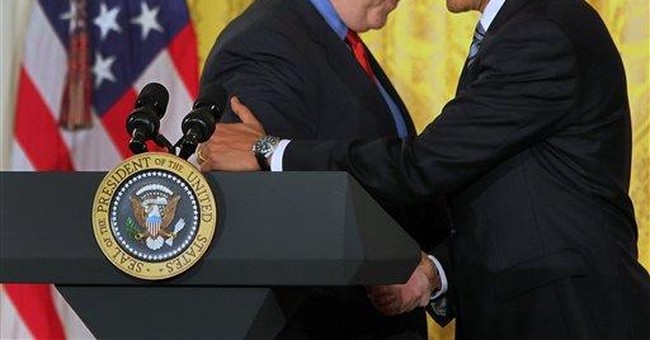 It all just went by in a flash: The very first TV interview Barack Obama gave as president went to Saudi -- backed, Dubai-based Al-Arabiya television. Missed it? The interview aired too late Monday night to make the morning papers (in most of the United States, anyway), transforming its initial burst of coverage into a second-day follow-up story (at least in the United States). It was as if the people (Americans) who put Obama into office were so much, well, chopped liver.

Is that halal? Couldn't say. But the target audience for this first Obama interview was anything but kosher. The whole event, however, was a huge surprise.

According to Time magazine, Al-Arabiya reporter "(Hisham) Melhem's bosses in Dubai got a feeler from the White House on Sunday." That image alone -- a White House "feeler" to "bosses in Dubai" is sci-fi fantastic. That is, it's easy to see why Obama would bypass Fox News, for example, but how could he do this to his Main Squeeze Media (MSM)?

On Monday, the White House contacted the Washington bureau of Al-Arabiya, but even then Melhem wasn't expecting anything greater than an interview with the new envoy to the Middle East, George Mitchell. "Would you like to chat with the president about 5 p.m. today?" a White House caller asked the reporter. And that was how this precedent-shattering interview came about.

But why did it come about? I'm guessing Barack Now-You-See-Hussein-Now-You-Don't Obama chose to sit down for this first interview before the Muslim world for an important reason. He wanted to appeal to what he seems to regard as his new constituency.

No kidding. Obama spoke quite deliberately about the requirements of his new "job" as commander in chief, many of which are unprecedented. "My job is to communicate the fact that the United States has a stake in the well-being of the Muslim world, that the language has to be the language of respect."

"I have Muslim members of my family. I have lived in Muslim countries," Obama continued, simply speaking about his Islamic connections, indulging in what he condemned as "scare tactics" on the campaign trail. Now these connections are job credentials. "My job is to communicate to the American people that the Muslim world is filled with extraordinary people who simply want to live their lives and see their children live better lives."

Obama continued. "My job to the Muslim world is to communicate that the Americans are not your enemy. We sometimes make mistakes. We have not been perfect. But if you look at the track record -- as you say, America was not born as a colonial power -- and that the same respect and partnership that America had with the Muslim world as recently as 20 or 30 years ago, there's no reason why we can't restore that."

What golden age of American-Islamic "respect and partnership" (circa 1979 or 1989) Obama is talking about I have no idea. But mark his words to describe Islam and the United States: "People who just want to see their children live better lives" versus a country that isn't "perfect" and sometimes makes "mistakes." This is one reprehensible way for an American president to frame the relationship between the repressive, jihad-exporting Sharia cultures of Islam and the liberty-and-justice-for-all-based USA.

"I'm not going to agree with everything that some Muslim leader may say, or what's on a television station in the Arab world," he continued, quite possibly but also quite opaquely referring to the genocidal yearnings and hatreds expressed from Iran to Syria to the Palestinian Authority by both leadership and state-run media. "But I think that what you'll see is somebody who is listening, who is respectful" -- there's that word again -- "and who is trying to promote the interests not just of the United States, but also ordinary people who right now are suffering from poverty and a lack of opportunity. I want to make sure I am speaking to them as well."

This wasn't just one of those beacon-of-freedom pep talks U.S. presidents have given in the past. This was something different. Indeed, not since Napoleon has a leader of a Western superpower made so unabashed a political pitch to the people of the Muslim world.

Commenting on CNN, Islam apologist Reza Aslan called himself "giddy" over the interview, explaining: Obama "is essentially setting himself up as a bridge between the Muslim world, between the United States and the Middle East. It's a grand gesture, and I think it's going to be taken very well."

In the Muslim world, anyway. But again, that's precisely where Obama was aiming.

At one point, the interviewer mentioned Osama bin Laden and his henchman Ayman al-Zawahiri.

When asked why they should be "more nervous," the president replied: "Well, I think that when you look at the rhetoric they've been using against me before I even took office, what that tells me is that their ideas are bankrupt."

Excuse me, Mr. President: You mean before they used rhetoric against you, their ideas were not bankrupt? But I digress. What's worth noting here is the possible glimmering of a presidential inference that he, Barack Hussein Obama, poses an alternative to Al Qaeda in the eyes of the Muslim world. (Mehlem insists Obama doesn't put Hamas and Hezbollah in the same category as Al Qaeda.)

Mehlem later interpreted these comments as I did above -- as the Obama alternative to Al Qaeda for Muslims. As Mehlem put it to theatlantic.com, "He's closing down Guantanamo, sending Mitchell, pulling out of Iraq, and ... I hope he would show Palestinians and Israelis tough love. Do you want to tell me that bin Laden and all these nuts" -- excluding Hamas and Hezbollah, in Mehlem's eyes -- "are not going to be nervous about him?"

In other words, the new president of the United States is vying for the affections of the Muslim world, and this is making jihadists "nervous." Aslan's comments seemed to underscore this same point. "I'm sure that wherever Zawahiri and bin Laden are right now, they're scrambling to try to figure out a way to answer this comment. When the president of the United States says, `My family is Muslim,' what are you supposed to respond to that? How do you -- how do you criticize that?"

I'll agree that it does tend to leave one speechless.