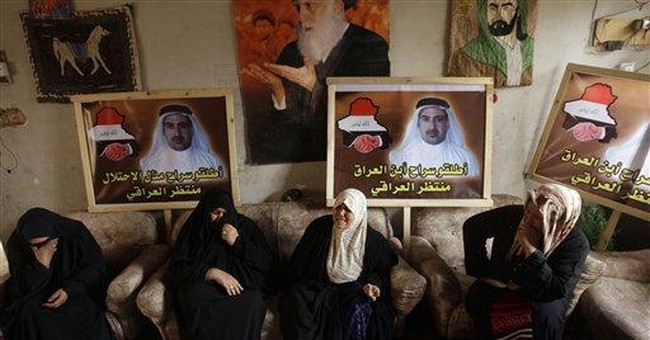 Here's your hat, what's your hurry -- but since you're still hanging around, why don't you knot your shoelaces together and soak your head?

That's the unsubtle Iraqi subtext to the agreement the United States recently and triumphantly inked with Iraq widely known as the Status of Forces Agreement, or SOFA.

Officially, the pact is titled "Agreement between the United States and the Republic of Iraq on the Withdrawal of United States Forces from Iraq and the Organization of Their Activities During Their Temporary Presence in Iraq," but I guess AUSRIWUSFIOTATTPI is a hard sell.

Actually, the whole thing is a hard sell, or surely would be if Americans really knew that in the interest of a treaty, the Bush administration has gone so far as to trade away, among other things, some of our troops' constitutional rights.

Media focus has narrowed mainly on a few points, including: Article 24, Paragraph 1, which stipulates a withdrawal date for all U.S. forces from Iraq of no later than Dec. 31, 2011; and Article 12, Paragraph 2, which states that "Iraq shall have the primary right to exercise jurisdiction over United States contractors and United States contractor employees." This means, of course, that as of Jan. 1, 2009, when the agreement goes into effect, all U.S. contractors will be under Iraqi law 24/7, just as though they were tourists vacationing in a foreign country rather than employees of the U.S. government working in a war zone.

But there's so much more to be sick about in this 18-page document, which I only recently found in its entirety online via one of the closer analyses out there by Chris Weigant writing at Huffington Post. (Contrary to my conclusions, Weigant thinks the agreement bodes "a pretty good outcome, all things considered.")

Weigant begins his analysis with Article 4 ("Missions"), aptly noting that "Iraq gets veto power over American operations." But that's putting it mildly. Paragraph 2 reads: "All such military operations ... shall be conducted with the agreement of the Government of Iraq ... shall be fully coordinated with Iraqi authorities." Paragraph 3 reads: "All such operations shall be conducted with full respect for the Iraqi Constitution and the laws of Iraq...." And there's more: "It is the duty of the United States Forces to respect the laws, customs and traditions of Iraq...."

What's up with that? This is the neither the first nor the last time in this agreement that the "laws, customs and traditions" of Iraq are declared "the duty" of Americans in Iraq to "respect." For example, Article 3 also declares: "While conducting military operations ... it is the duty of members of the United States Forces and of the civilian component to respect Iraqi laws, customs, traditions, and conventions" and "it is the duty of the United States to take all necessary measures for this purpose."

Has such a "duty" ever been written into a U.S. treaty with another country? Is it even constitutional? I doubt it. After all, the "duty" of United States Forces anywhere is to the U.S. Constitution alone, not to the laws of another country. Given that Iraq's constitution above all enshrines Sharia (Islamic law), this would also seem to mean that it is now "the duty" of U.S. troops and other Americans in Iraq to "respect" Sharia as well.

This isn't just grotesque, it poses a colossal moral and strategic problem if and when Iraqis deem American actions in Iraq to clash with the strictures of Iraqi law. Combined with the huge concessions our government has made regarding legal jurisdiction over Americans in Iraq, this new American "duty" to Iraq is at least humiliating if not also potentially disastrous.

The jurisdiction article (Article 12) opens by repeating this same troubling stipulation: namely, that it is "the duty of the members of the United States Forces and the civilian component to respect Iraqi laws, customs, traditions and conventions," which, of course, include Sharia. It goes on to place U.S. contractors and their employees wholly under Iraqi legal jurisdiction, and to place "United States Forces" and "the civilian component" under Iraqi legal jurisdiction should they commit "grave premeditated felonies" off base and off duty.

The predicament of U.S. contractors aside, it appears that the U.S. government has surrendered key constitutional rights of our fighting men and women. Now, it's bad enough to read, for example, in Article 5 ("Property Ownership") that the Bush administration has agreed to transfer to the Iraqi government everything "connected to the soil" that the United States has built -- bases, buildings, facilities of all sorts -- for free. Or, even more significantly, in Article 27, Paragraph 3, that "Iraqi land, sea and air shall not be used as a launching or transit point for attacks against other countries." After all, U.S. bases in Iraq for just such potential actions against Iran or Syria were once ballyhooed as a strategic rationale for our prolonged presence in Iraq. But what about this new "duty" of American troops to "respect" the laws of Iraq, and even, in some circumstances, to be subject to them?

It all starts New Year's Day.