Deroy Murdock
|
Posted: Dec 15, 2019 12:01 AM
Share   Tweet
The opinions expressed by columnists are their own and do not necessarily represent the views of Townhall.com. 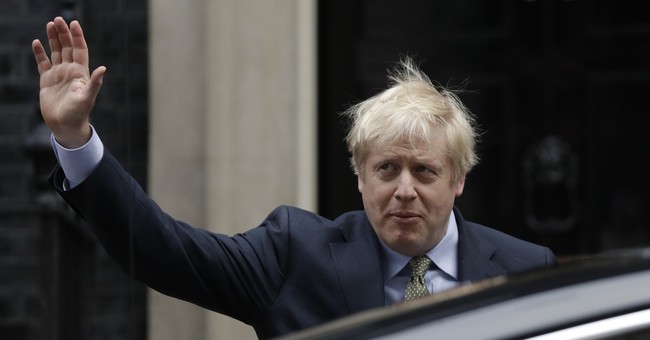 The recent mayhem on London Bridge was a stark reminder of the eternal evil of Islamic terrorism and the ruthlessness required to erase it. And the political reaction to this carnage might have aided Thursday’s massive Tory Party victory.

On November 29, Usman Khan, a supposedly former terrorist, wounded three people and fatally stabbed Saskia Jones, 23, and Jack Merritt, 25, two young Britons who — in an excruciating irony — participated in that day’s meeting (near the bridge) of Learning Together, an organization that claims to rehabilitate terrorists. Khan, 28, was considered one of its model students.

As Giulio Meotti recalled in a chilling essay for the Gatestone Institute, Khan wrote glowingly about his experiences with this outfit. “Learning Together is about opening minds, unlocking doors, and giving voice to those who are shut down, hidden from the rest of us.”

It was all quite touching, really, until Khan forgot whatever he learned together, donned a fake bomb vest, strapped knives to his wrists, and then murdered these idealistic young people before lightning-quick lawmen shot him to death in a pristine use of police power.

Khan, it soon emerged, was convicted in 2012 for planning to detonate the London Stock Exchange, the home of then-mayor of London Boris Johnson, and the London Eye, a mega-Ferris wheel on the Thames. He was sentenced to 16 years in prison for his role in this al-Qaeda-inspired conspiracy.

Never mind all that! Khan was sprung in December 2018, after just eight years behind bars. Khan posthumously exposed the stupid and deadly practice of freeing terrorists before they finish their sentences, for which there simply is no justification.

Also, since Khan’s rehabilitation clearly was a belly flop, other turnaround programs have been exposed as catastrophes.

According to Meotti, the Behavioural Insights Team studied 33 of the United Kingdom’s deradicalization programs. Only two were deemed successful. British criminologist Simon Cottee has mocked the prevailing “deadly delusions about curing terrorists.”

A French Senate report called that nation’s de-radicalization campaign a “total fiasco.” French lawmakers who visited one such facility in Chateau de Pontourny were appalled to learn that it housed exactly one reputedly recovering terrorist.

What then is to be done?

The most sensible thing to do with these Islamic extremist killers is to dispatch them. Membership in al-Qaeda, Hamas, Hezbollah, ISIS, and similar jihadist groups should be reason enough to liquidate these murderers before they neutralize any more innocents.

The ISIS fighters now in Syria should be wiped out. A single, swift mass trial and prompt executions would eliminate this deadly threat. Every dawn tempts individual or mass escapes from the custody of highly distracted Kurdish forces, already deeply embittered by the cold shoulder that President Donald J. Trump gave them as he withdrew U.S. GIs from their side in early October.

Turkey — which now occupies parts of Syria previously controlled by the Kurds — lacks the PC paralysis and Mr. Rogers attitude that make Europe too weak to get this done. Turkey should be encouraged to finish off the ISIS prisoners. These Islamo-butchers are not soldiers. They wear no uniforms and represent no nation. As such, the Geneva Convention (which ISIS never signed) does not apply to them. They must not be allowed to use this pact as an unearned shield.

European nations should grow a collective vertebra and enact the death penalty for terrorists.

Britons on Thursday wisely chose to keep incumbent Boris Johnson as their prime minister. He led the Conservative Party to win 365 House of Commons seats —a 40-seat majority, and 66 more members than it had before the election. The Tories are in their strongest position since 1987, during the premiership of the Iron Lady, Margaret Thatcher. Johnson and the Conservatives won primarily on Brexit, but opposition leader Jeremy Corbyn’s response to the London Bridge attack did Labour no favours.

After Khan’s killings, Sky News asked Corbyn if terrorists should finish their prison sentences. “Not necessarily, no,” Corbyn replied. “I think it depends on the circumstances and depends on the sentence and crucially depends on what they’ve done in prison.”

Corbyn, thus, confirmed that his skull is softer than Scotch eggs.

Earlier, Meotti reports, the far-Left Corbyn had been captured on camera “protesting the extradition of British terror suspects, including two aides to Osama bin Laden.”

It’s little surprise, then, that Corbyn dragged Labour down 42 seats, to a total of 203 members on its benches — the party’s worst attack of electile dysfunction since 1935.

Conversely, after Khan’s bloodshed, Prime Minister Johnson told the Telegraph: “We must keep violent offenders and terrorists in jail longer and end the automatic early release system.” Especially after his landslide win, Johnson should make terrorists pay the ultimate price for their fundamental evil and their deadly choices.

If the idea of executing terrorists makes liberals from London to Laguna Beach burst into tears, they should remember this: Dead men tell no tales — nor do they fatally stab promising young people at Terrorists Anonymous conferences.

Deroy Murdock is a Manhattan-based Fox News Contributor, a contributing editor with National Review Online, and a senior fellow with the London Center for Policy Research. Bucknell University’s Michael Malarkey contributed research to this opinion piece.