Deroy Murdock
|
Posted: Aug 14, 2019 12:01 AM
Share   Tweet
The opinions expressed by columnists are their own and do not necessarily represent the views of Townhall.com. 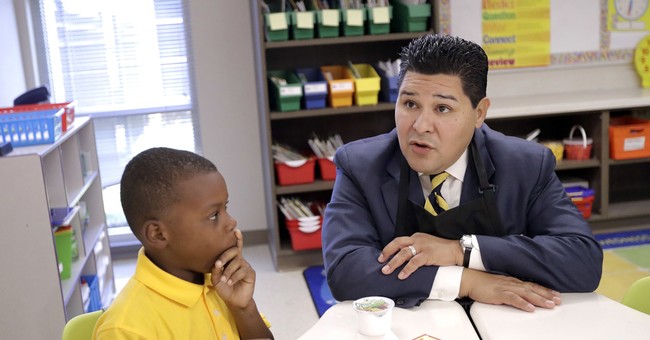 Editor's note: This column was co-written with Charles Vavruska.

New York City Council Member Robert Holden (D-Queens) and eight other lawmakers wrote Mayor Bill de Blasio and asked him to replace Education Chancellor Richard Carranza, if he “continues to divide the city.” The June 15 letter stated that Gotham “needs a chancellor who promotes education, not division.” It accused Carranza of “releasing divisive statements directed toward parents and students” and “changing policies based on ethnicity rather than efficacy.” After more than a year of suffering Carranza’s onslaught of racial fetishism, local public-school parents were relieved that the cavalry finally arrived.

Carranza stumbled into New York, having flopped in the San Francisco and Houston school systems.

After his 2012-2016 Bay Area bungle, Stanford University’s Public Policy Program concluded that the San Francisco School District had “the worst black student achievement of any county in California.” Only 18 percent of SFSD’s black students passed 2016’s state reading test, versus a still grim 31 percent of black students statewide. (The equivalent figures for white students: 76 percent in SFSD, and 74 percent in California.) After four years of Carranza’s misrule, local NAACP president Amos Brown challenged San Francisco’s school board in 2017: “Declare a state of emergency.”

Having left SFSD in tatters, Carranza spent all of 18 months lording over Houston’s schools, before jetting off to Gotham. Houston? They had a problem. The city did not appreciate being Carranza’s stepping stone.

“We’d like to say that Carranza’s legacy will be marred by his abrupt departure, but that presumes he has a legacy to tarnish,” the Houston Chronicle editorialized in March 2018. “Carranza leaves behind the chaos of unfinished work. He inherited a tumultuous situation and fed the flames.”

Just three weeks into his tenure, on April 27, 2018, Carranza unveiled what Holden’s letter called “divisive statements.” Carranza unleashed this Twitter blast, “WATCH: Wealthy white Manhattan parents angrily rant against plan to bring more black kids to their schools.” Carranza mocked a video in which a mother complains that her diligent, accomplished daughter would be barred from a decent school because her skin was the incorrect color. In Carranza’s warped worldview, academic achievement is irrelevant, and a child’s complexion is what really counts.

Less than a month into his reign of error, Carranza attacked the Specialized High School Admissions Test (SHSAT), which measures students’ preparedness for Bronx Science, Brooklyn Tech, Stuyvesant, and New York’s other Specialized High Schools (SHS). It didn’t matter that these institutions are among America’s best or that they have offered extraordinary opportunities to generations of immigrant, poor, and working-class children. The 14 Nobel laureates whom these schools have produced, be damned. New York’s Minister of Racial Selection knows better.

Asked about the fact that a majority of these schools’ students are of Asian heritage, Carranza was dismissive and bigoted: “I just don’t buy into the narrative that any one ethnic group owns admission to these schools.” The Chinese American Citizens Alliance of Greater New York demanded Carranza’s apology. “In your short time as Chancellor, you have fanned the flames of racial division from the Upper West Side to the Specialized High Schools. Please stop using racially divisive rhetoric to accomplish your goals.”

Carranza then told the New York Post that he didn’t know which New York City residents he had reached and called SHSAT defenders “racist.” Among those whom Carranza slandered were black Bronx residents who movingly confirm how the colorblind, objective SHSAT rescued them from academic oblivion and opens huge doors for New York’s children.

Carranza even launches racial artillery against his own employees at Department of Equation headquarters, originally called the Tweed Courthouse. Carranza’s shenanigans would make Boss Tweed cringe. In Carranza’s hostile work environment, “whiteness is toxic,” employee promotions and demotions are dermatologically driven, and those of Asian descent somehow are privileged, thanks to their “proximity to whiteness.”

Carranza’s reacted predictably to Holden’s letter: He accused a “man of color” of racism. Oops! Holden is white. De Blasio and Carranza also pressured City Council members to blast the letter in racial terms. This prompted dim-witted Council Member Antonio Reynoso (D – Brooklyn) to write on Twitter, “We didn't need white men who live in privilege telling us that we are being divisive.” Of course, this ignores the fact that the letter’s signers include Council Member Peter Koo (D – Queens), who is Chinese, and Council Member Karen Koslowitz (D – Queens), who is a woman.

Carranza also staged a press conference featuring several supportive City Council members. This totally backfired. A group of mostly ethnic-Asian demonstrators screamed during the press conference, “Fire Carranza!” Even from hundreds of feet away, they drowned out the pro-Carranza testimonials. The protesters soon marched up the Tweed Courthouse’s steps wielding signs that read, “Fire the Racist Carranza” and “Carranza is Anti-Asian.” They chanted, “Hey, Ho! Carranza’s Got to Go!”

As his city devolves into racial turmoil, de Blasio pursues his self-debasing presidential campaign. In one Orwellian twist, de Blasio hammered Democrat front runner Joe Biden for cavorting with segregationist Senate Democrats nearly 50 years ago, even as de Blasio stands by his schools chancellor, a modern day Bull Connor who has opened administrative fire hoses on immigrant Asian children via racist rhetoric and education policies. For once, the “Dope from Park Slope” should think of someone beyond himself. In the name of New York City’s beleaguered school children, de Blasio urgently needs to pause his self-humiliating campaign vanity project, return to City Hall, and fire Richard Carranza.