Deroy Murdock
|
Posted: Jun 20, 2019 7:50 AM
Share   Tweet
The opinions expressed by columnists are their own and do not necessarily represent the views of Townhall.com. 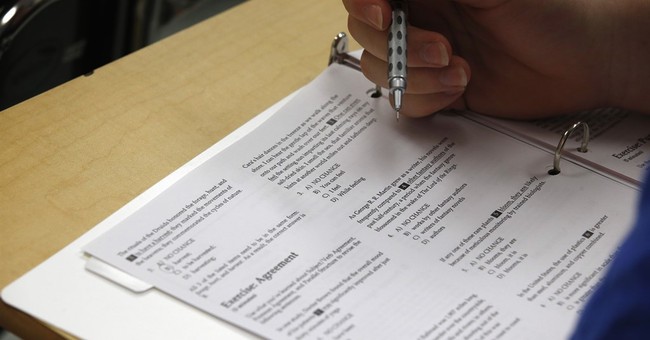 Editor's note: This column was co-authored by Charles Vavruska.

“Only 7 Black Students Got Into Stuyvesant, N.Y.’s Most Selective High School, Out of 895 Spots,” blared the headline in The New York Times. Eliza Shapiro’s March 18 article caused a hurricane of media-driven rage and rendered the Leftist Twitterati apoplectic. Predictably, NYC Mayor Bill de Blasio (D) and Gotham’s Schools Chancellor Richard Carranza used this occasion to split the Big Apple along racial lines. They renewed their call to eliminate the Specialized High School Admissions Test (SHSAT), which measures students’ preparedness for Stuyvesant, Brooklyn Tech, Bronx Science, and New York’s other Specialized High Schools. Since the SHSAT is written into state law, its fate lies with policymakers in Albany, not with the mayor or his equity-obsessed de-education chancellor.

Pro-SHSAT parents and alumni dominated hearings in Queens and Brooklyn, with few anti-SHSAT activists in attendance. In contrast to the SHSAT supporters’ calls for consistent, standardized tests, SHSAT detractors argued that diversity through race-based admission would provide better education.

SHSAT fans showed up in force for a conclave in the Bronx last month. Liberal, elitist SHSAT opponents largely stayed away. Perhaps traveling to New York’s lowest-income borough was too far a leap from their cushy bubbles in Manhattan and Brooklyn’s tonier precincts.

Unexpectedly, black Bronxites tried to slap the city to its senses. They defended the SHSAT and shared inspirational stories of how it opened doors for them.

Eleanor George, a Bronx resident and Bronx Science alumna, applauded the test. She recalled her years at I.S. 131, known more warmly as The Albert Einstein School. Located in the Bronx’s Soundview neighborhood, this middle-school campus was mainly black and Hispanic. Many students there called the nearby projects home. George remembered a guidance counselor visiting her class and “lauding the praises” of vocational high schools. When George went home that day, she told her mother that she aspired to attend a vocational high school.

The next day, her mother confronted the Einstein School’s principal: “How dare you only offer vocational high schools” to George and her classmates. The guidance counselor soon returned to the class and told students about the Specialized High Schools, including Bronx Science. Einstein offered George and some of her classmates free test-preparation lessons in the morning, before school. George scored very high on the SHSAT. She was accepted to Bronx Science’s Class of 1978, as was her friend who lived in a housing project and achieved that year’s highest SHSAT score. George pondered what her friend’s fate would have been if her mother had not advocated for her.

George, who became a teacher, also said that many Bronx Science students in the 1970s received the same test-preparation courses that she did. Restoring such instruction, she argued, would have positive results for many black students who are improperly nurtured today.

Next, Joan Cargill, a Bronx Science alumna, took the stage at Liu’s May 17 forum. Cargill addressed “Inspiration, being inspired, the lack of inspiration, and the need to bring it back.” She spoke about growing up in the Bronx as the daughter of Jamaican immigrants. Cargill, then 9, learned that a friend’s cousin was accepted to Bronx Science. This news inspired her to attend the school that yielded eight Nobel Laureates. “The test can’t go away,” Cargill pleaded. “In a society where everyone wins a trophy, all I had was the test. My parents had no money. It was the competitiveness I needed, as a girl whose parents worked all the time.”

A black woman named Lisa Benton told a story that could make an actuary cry. And it did.

Benton explained how her uncle, the son of a Savannah, Georgia sharecropper, took Stuyvesant’s test in 1932. He did well and was accepted. However, the admissions officers scoffed at the notion that a sharecropper’s son could possess such smarts. So, the young man had to re-take the exam. The farmer’s son met the required score and entered one of NYC’s most successful anti-poverty institutions.

“If he could pass this test in 1932,” Benton said, “I know in 2019, kids of color can pass this test.” Seeing this man’s niece so eloquently tell this tale movingly confirmed that Specialized High Schools elevate New Yorkers, so that they and their progeny can climb to previously unimaginable heights.

“Hearing Lisa Benton’s story brought tears to my eyes,” said Jon Roberts, a local actuary, mathematician, and education-reform activist. “Her uncle struggled to overcome the injustice and discrimination that were so prevalent in 1932. He earned the right to attend Stuyvesant through study and hard work, despite being poor and black during the Great Depression.”

Roberts added, “If admission were determined by subjective criteria, then he never would have been admitted to Stuyvesant, despite being qualified. But the test-only policy defeated anti-black racism and let Lisa’s uncle attend. Only a test can overcome human bias. We must keep the test-only policy for the Specialized High Schools.”

As for School Chancellor Carranza, he told the New York State Assembly Education Committee last month: “I refuse to believe there are no smart black and brown children.” Too bad he is so race-obsessed that he cannot let these precocious children meet their natural-born, God-given potential. Instead, he plays race-based numbers games with their future.

Carranza also counts adult racial beans, often at the expense of “implicitly biased” Caucasians. As a New York Post headline put it, “White Out: Carranza ‘demoted’ execs because ‘of their skin color.’” For Carranza, race, not classroom excellence, is the primary factor in Department of Education employment decisions. New Yorkers will learn plenty more about Carranza’s color-driven worldview as he defends himself in a $90 million lawsuit filed by three white, female DOE employees. They claim that Carranza denied them promotions and, instead, offered them to allegedly less-qualified minority staffers.

At the same State Assembly hearing, Public Advocate Jumaane Williams (D – New York City) testified that eliminating the SHSAT is like “Saying your kids are too dumb to pass,” which “makes people believe their communities are somehow dumber than others.” The uplifting Bronx tales shared at Liu’s forum would prompt anyone who heard them to fight against Carranza’s anti-SHSAT jihad, which is built on an assumption of black and Hispanic intellectual incapacity.

Meanwhile, de Blasio has abrogated his mayoral duties to pursue a self-humiliating presidential bid. A recent survey revealed that he enjoys the support of 0 percent of Democrats and, among 600 Iowans polled, not even one wanted him, even as a second choice. Instead of romping through Iowa corn fields, de Blasio should have sat in Lehman College’s Lovinger Theatre in the Bronx. He might have been moved to fire Carranza and install someone ready for the hard work necessary to repair Gotham’s dysfunctional government schools. America’s largest city desperately needs a leader who can address the rampant under-education of so many black boys and girls, abandon twisted policies that push them down in the name of equity, and, instead, lift every child — up, up, and away.

Manhattan-based political commentator Deroy Murdock is a Fox News contributor and a senior fellow with the London Center for Policy Research. Queens-based education reformer Charles Vavruska is a parent activist and evangelist for the local Specialized High School Admissions Test.