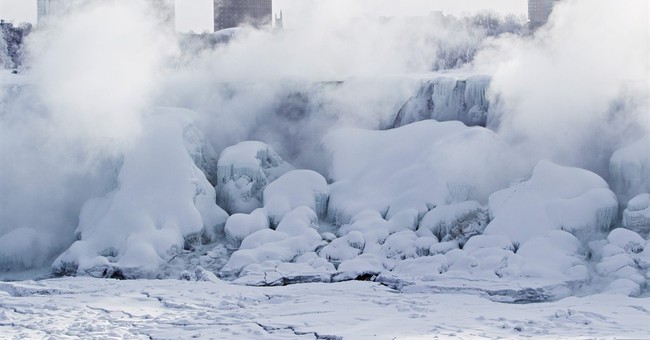 NEW YORK — Winter 2015 has become a combination of Dr. Zhivago and the scary scenes of  Frozen. This has rendered champions of so-called “global warming” eerily quiet.

Boston, the epicenter of this epic chill, has amassed a near-record 101.8 inches of snow this season. While Bostonians traverse snow mazes, trains have been idled, and some 147 roofs have collapsed beneath the white stuff in Massachusetts alone.

Niagara Falls has frozen solid. Using ice picks, Canadian adventurer Will Gadd on January 27 became the first person to climb 130 feet up the landmark over which daredevils have tumbled in barrels.

Across Dixie and beyond, ice has rendered car brakes useless. Multiple-vehicle pileups have triggered injuries and deaths. Further south, Florida citrus farmers fear that their crop will become frozen concentrated orange juice, even before harvest.

Overseas, snow in Saudi Arabia inspired a cleric to instruct Muslims not to build snowmen, since Islam forbids human images. Some 29 migrants fleeing ISIS-inspired chaos in Libya died of  hypothermia February 9 after Italian sailors plucked them from the frigid Mediterranean. The Guardian reports that English and Welsh death rates are 32 percent higher than normal this winter, as the cold kills.

Citing the United Nations Environment Program’s Noel Brown, the July 5, 1989 Miami Herald  reported that “entire nations could be wiped off the face of the Earth by rising sea levels if the global warming trend is not reversed by the year 2000. Coastal flooding and crop failures would create an exodus of ‘eco-refugees,’ threatening political chaos.”

Current eco-guru Bill McKibben predicted that year that “a few more decades of ungoverned fossil-fuel use and we burn up, to put it bluntly.”

Carbon dioxide is rising, which should poach the Earth in its own greenhouse gases. As of last September, CO2 emissions “were on track to hit a record 40 billion metric tons...10 times more than in 1943 (4.007 billion tons),” reports the Competitive Enterprise Institute’s Marlo Lewis, Jr. As CO2 soars, however, average temperatures flat line, and winter readings plunge. This capsizes the vaunted greenhouse effect.

The computer models behind so-called “global warming” similarly predict relentless heat. And yet satellites show no increase in Earth’s average temperature since 1997. A peer-reviewed paper  recently published by the Chinese Academy of Sciences identifies a faulty equation common to these climate models. It wrongly forecasts warming at levels double or even triple actual observations.

Garbage in. Garbage out.

But wasn’t 2014 “the hottest year ever?” Surface thermometers so indicated. However, they can be swayed when creeping urbanization warms previously rural measuring stations. Remote Sensing System satellite data rated last year the sixth hottest on record.

Also, most journalists failed to mention that NASA reported a 62 percent probability that their “hottest year” calculations were wrong. The National Oceanic and Atmospheric Administration estimated 52 percent odds that it was mistaken. So, 2014 was, most likely, not the hottest year ever.

Despite abundant and obvious counter-evidence, the so-called “global warming” alarmists cling to their precious theory. For them, it’s not about facts. It’s about faith.

Rajendra Kumar Pachauri admits as much. He chaired the United Nations’ Intergovernmental Panel on Climate Change, the Vatican of Warmism. Pachauri quit the IPCC on February 24 amid sexual harassment charges. “For me the protection of Planet Earth, the survival of all species and sustainability of our ecosystems is [sic] more than a mission,” his resignation letter stated. “It is my religion and my dharma.”

As the ice and snow accumulate, and CO2 inexplicably increases, the alarmists will stop preaching so-called “global warming” as soon as radical imams stop issuing fatwas.

Deroy Murdock is a Manhattan-based Fox News Contributor and a media fellow with the Hoover Institution on War, Revolution and Peace at Stanford University.
WATCH: Kamala Harris Attempts to Do Damage Control Following the First Presidential Debate
Beth Baumann