Why Are We Reuniting Kids with Their Really Awful Parents?

Derek Hunter
|
Posted: May 11, 2021 12:01 AM
Share   Tweet
The opinions expressed by columnists are their own and do not necessarily represent the views of Townhall.com. 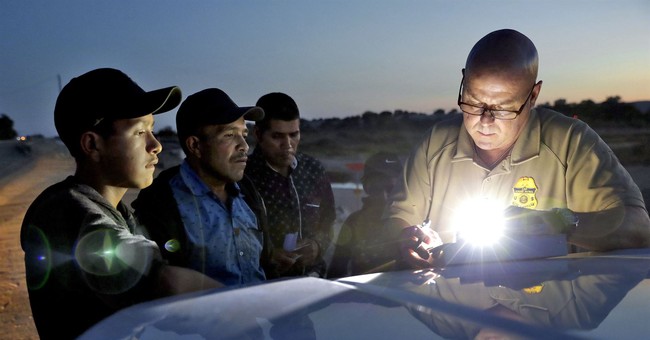 There are a lot of people who live in New York, but have family in, say, Atlanta or Chicago. Now imagine if a bunch of those people decided to send their minor children to visit that family, but didn’t have the money for a plane or even bus ticket. Rather than wait to save enough money to send their kids the normal way, pretend they simply hired a member of a drug dealing, murderous gang to march them 1,000 plus miles with no address for their relatives, just a phone number for them, should they make it there and find someone willing to let them use their phone.

How long after someone found the kid would it take for you to be tossed in jail? Three seconds? Less?

Yet, if you’re an illegal alien from South or Central America, send thousands of dollars back home to pay the drug cartels to march a child you left behind, many times years ago, north to the US-Mexico border, your child would be reunited with you as quickly as the federal government could arrange for it to happen. And it wouldn’t cost you a dime.

That is what’s happening on the southern border now. Thousands upon thousands of children, subjected to God knows what on that journey (the human smuggling scum have a penchant for sexual assault and rape, especially of young kids) are being reunited with the parents who paid for their abuse. And we, the American taxpayer, get the privilege of picking up the tab for the last leg of that journey.

Each and every one of those children should be placed with Child Protective Services as the parental rights of those who knowingly entrusted them to those cartel monsters should be permanently stripped. These kids should be placed for adoption and their parents should be tracked down through those contact numbers and sentenced to lengthy prison time. Then deported immediately thereafter.

You do this for two reasons. First, do it enough times and people will stop putting their kids through this horror. Second, the parents really do deserve punishment.

Remember the Meitiv family? They lived in Silver Spring, Maryland, and were arrested a couple of times because they were “free-range parents.” They let their kids, ages 6 and 10, go to a park about a mile from their home by themselves. Think what you will of the concept of what they did, they went through hell because of it.

Somehow, illegal aliens get a pass.

Why? Because the federal government favors them over Americans.

I shouldn’t say the federal government, it’s really the Democrat Party. In the last couple of decades, elected Democrats across the country and in the federal government have been showering illegal aliens with everything from driver’s licenses to direct cash payments. Cities and states stopped prosecuting illegals for some crimes to prevent them from blipping on the radar of federal immigration officials. How many Americans have died because they crossed paths with an illegal alien who could and should have been deported earlier but weren’t because some Democrat worked hard to prevent it?

We’ll never know, and they’ll never pay. They’ll also never be able to wash the blood off their hands, even as they don’t acknowledge it’s there.

Every child marching up the Mexican coast who is abused or raped is on Democrats; they’ve encouraged and enabled it. And they’re actively working to reunite those children with the adults who paid for the horror.

We’re meant to feel sympathy for the illegal alien parents, I just don’t. The New York Times told the story of a mother reunited with a child she hasn’t seen in seven years. As the girl, now 10, prepared to board her taxpayer-funded flight to meet the mother she didn’t know, she wondered, “Will I recognize you?”

The girl had just been through a 2,500-mile trek from Guatemala courtesy of the mother who’d abandoned her. That girl is one of 50,000 illegal alien kids long-marched into the country in the past six months. Kids our government is taking great pains, and sparing no expense, to deliver to the people who funded their abuse.

The Times reports, “Their parents were encouraged to send for them by President Biden’s more welcoming approach to immigration.” Let that sink in as he sends his administration scrambling to “help” those kids. They were being abused before, and the president of the United States is actively working to expose more children to even worse abuse.

You have to ask yourself, why is that?