I Can’t Bring Myself to Care Anymore

Derek Hunter
|
Posted: Jan 31, 2021 12:01 AM
Share   Tweet
The opinions expressed by columnists are their own and do not necessarily represent the views of Townhall.com. 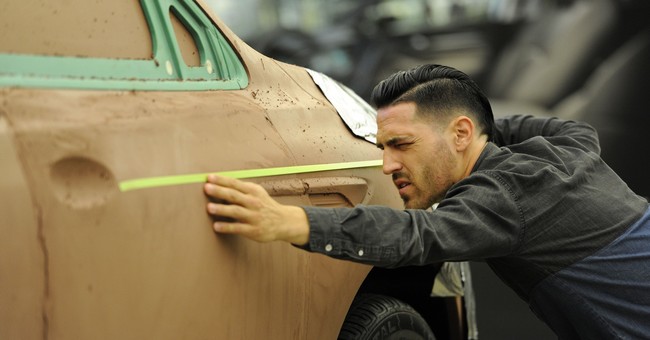 There was a time when an allegation of racism was one of the worst things someone could be accused of. Now, it’s a punchline. Back in the day, the word had meaning – aside from an occasional Al Sharpton or Jesse Jackson shakedown, it was not cavalierly tossed around to score political points and it was not reported on without something close to irrefutable proof. Now it’s a debate tactic of the left to avoid serious engagement and cover for a lack of factual back-up. Everything is “racist” now, and as someone who actually used to care, who was disgusted at the concept and its existence, thanks to the weaponization of the term, I can’t bring myself to care about it anymore.

When I was younger, one of my many jobs was working in a machine shop that built devices to shape metal. I don’t want to be more specific than that because the company still exists and my account is based solely on what I saw at the time and hopefully has changed, but the company sure came off as racist for the few months I was there.

In one of the many times in which I was desperate for a job, I saw a help wanted sign in an industrial park outside a non-descript building and walked in. After filling out an application, handed it over to the foreman, and after a quick “interview,” I was hired on the spot and told to start the next day. It was amazingly easy.

Happy to have a job, I went about it without paying attention to much else. But it was boring, repetitive work – taking a piece, drilling a hole in it, stacking it in another bin for assembly. Mind-numbing for someone with a desire for more but no drive or clue how to do anything about it would be the perfect words to describe it. But it was a job, and just having a job was the extent of my career goal at the time.

I quickly made friends with a few of the younger guys, one of whom was my cousin, and we’d find ways to make it less awful – which would sometimes involve slamming a 40 of malt liquor and/or smoking a joint at lunch. I don’t recommend doing this and operating heavy machinery, but when I was young, aimless, and dumb, I was young, aimless, and dumb.

One day, the company was hiring again and I noticed people were coming in the way I did to answer the sign out front. I saw several black guys coming in, filling out the application, handing it to the foreman and leaving. They were given the standard blow-off “Thanks, we’re just starting the process of looking” response anyone spending their time filling out applications knows well.

Then a white guy came in and, like I was, had a talk with the boss and started the next day.

I pointed this out to one of my work friends who said it always happens like that. Everyone who worked there was white, something I’d noticed but didn’t think anything of because I was new and had no idea what had happened before I’d started. The place had high turnover, but not a lot of employees – maybe 30? Each time someone left, the pattern repeated itself.

I had a problem with this. I needed the job, but I wanted to see something happen to them because of it. Maybe there was a reason, maybe I was wrong, I had no idea about the inner-workings of the company or its history. I was just a new guy on the shop floor, usually wasted after lunch. But I wanted to get someone with power to look into it, maybe force some change.

I tried calling the local talk radio station a few times, figuring a public airing (without naming the company) might get some attention. The call screener told me they weren’t interested. I called the Equal Employment Opportunity Commission (EEOC), thinking the government could get to the bottom of it. They weren’t interested because I wasn’t the person discriminated against. That struck me as odd, but I didn’t yet know how worthless the federal government was.

In addition to working in the shop, I was working nights at Best Buy, selling TVs. With what the EEOC told me in mind, I told a black co-worker friend of mine about it and we devised a plan to have him come in to apply for a job, and if he weren’t hired but a white guy was, we figured the EEOC would then care. But a week of waiting, he never showed up to apply.

I quit soon after because I hated the job and the place.

I could never stand racism or anyone who was. Not much one person can do about it, I learned, but I never lost the disgust at the concept. And now that disgust is surpassed by the way I feel about how Democrats are playing that card so often, and for everything.

Democrats have declared every arrest, every police officer, even the very concept of enforcing the law to be racist. Every Republican, every independent, every non-Democrat to be racist. Disagreement, dissent, and any bit of non-conformity…

As someone who cares about the real problem of racism, I can’t bring myself to do it anymore. When no matter what you do you’re labeled a “white supremacist,” what’s the point? If everything is racist, nothing is racist.

Racism, of course, does still exist, but it exists in such small doses and from all quarters. Yet, Democrats have redefined the terms around it to the point that they’ve taken all meaning out of it. Now only white people can be racists, all white people are racist unless they’re sufficiently “anti-racist,” which is code for “Democrat in good standing.”

Meanwhile, Black Lives Matter-ANTIFA rampage, destroying lives and they’re cheered, revered by the “woke” establishment, covered for by the media, even nominated for Nobel Peace Prize.

I’m done. I can’t care anymore. Show me real injustice, and I’m there. But when a political party waters down true injustice to score politically and drowns out reality with their latest tactic, I’m out.

Racism still exists. In a nation of 330 million people there are always going to be a few bigots around, of every color. But this country isn’t racist, fundamentally or otherwise. The Democratic Party is. And as long as they continue to engage in that racism and get away with it, people will continue to suffer and the few real victims who exist will continue to be ignored for the politically convenient and manufactured victims. I’m not going to be a part of it, so I’m going to join the majority who tune it out.

Republicans don’t have the wherewithal to spot it, nor the underpants content to effectively counter it. As long as they remain afraid of the charge, it’ll work. For my part, that kid who scrambled to find someone who cared enough to do what was right has now heard wolf cried too many times, for too many things where there wasn’t a wolf or even a dog to give a damn anymore. If turning people off to fighting real injustice was the goal, mission accomplished, Democrats.