What’s In A Name?

Derek Hunter
|
Posted: Dec 27, 2020 12:01 AM
Share   Tweet
The opinions expressed by columnists are their own and do not necessarily represent the views of Townhall.com. 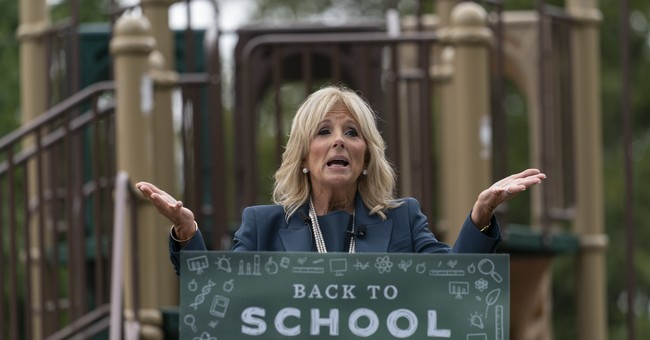 The Washington, DC, establishment absolutely loves itself. Every profession in the city is riddled with people who dine out on titles and past accomplishments, and will do so for the rest of their lives. “Right this way, Ambassador,” is muttered daily to someone who served for 20 minutes in an administration generations ago. They absolutely love it. So it’s no wonder Jill Biden felt the need to order people to refer to her as “doctor,” since she’s spent most her adult life in the shadow of people who pat themselves on the backs so hard over titles that you’d think they’ve giving themselves the Heimlich maneuver.

I don’t know if it’s insecurity or arrogance, probably an unhealthy combination of both, but whatever it is, these people love their titles. We shouldn’t let these titles be kept.

Article I, section 9, clause 8 of the US Constitution reads, in part, “No Title of Nobility shall be granted by the United States.” Granted, these aren’t technically titles of nobility, but they are, in a sense, as close as Americans can get. Considering our language is declared changed every time some leftist creates a new way to be offended by something perfectly acceptable 20 minutes earlier, perhaps we could change the definition of what constitutes a title of nobility to strip these people of their titles once they leave office. Remind them they are not special, that simply because they were once Deputy Under Secretary of the Department of Overbearing Government doesn’t mean they still are; that someone else is now.

If you’re Jill Biden, your entire second marriage has been spent surrounded by people who think just because they once held a political appointment at some point in their lives that they leave a bathroom smelling with a field of flowers, no matter what they had for dinner the night before. That scenario has “inferiority complex” written all over it.

That might explain why, at the age of 55, Jill Biden decided she’d get a “Doctor of Education” degree that did nothing to help her career and she had no use for beyond vanity.

She desperately wanted to be called “Dr. Biden.” In a world of “Mr. Ambassador” and “Madame Secretary,” she was just Jill. Worse, simply Mrs. Biden. Feeling inferior to people who’ve done things with their lives is one thing, but to your own husband? Especially when your husband is a dimwitted backbencher with no real accomplishments himself.

With those circumstances, it’s little wonder she felt inadequate and ran to a state school for a joke of a degree. They probably offered to give her an honorary one but she likely wanted her being called “doctor” to be somewhat more legitimate than Maya Angelou. Her joke of a thesis indicates she might’ve been better served taking the fully fake one.

But Jill Biden is just a symptom of a larger problem – a class of people whose job titles follow them throughout their lives. Barack Obama’s Twitter bio reads, “Dad, husband, President, citizen.” Using Bill Clinton’s definition, Obama “is” all of those things but one: president. He was, but he’s not anymore. Yet every interview he gave for the first volume of this third autobiography had sycophantic journalists drooling all over him while moaning, “Mr. President” this or that. The same goes for all of them, and every former senator or congressman. Ambassadors, most of whom were given the job because they donated the right amount of money; secretaries of this or that and their deputies. Even directors of certain agencies march around with their former titles like royalty. Governors, state and local officials keep their titles too. It’s time to end this.

The first step in ending the special treatment of the political class is to stop treating them like they’re special people. They’re supposed to be citizen representatives, with the emphasis on citizen. Sadly, over our history we’ve turned politics into a career, an industry. It’s the family business for many whose only reason for their electoral victory lies in their last names. Maybe if we stop elevating these people after they leave office, so many Americans would stop elevating the things they do while in office.

Maybe not. Probably not, actually. But at least these former whatevers would lose some of the sense of superiority they so revel in.