Democrats Are Not Serious, But You Must Take Them Seriously

Derek Hunter
|
Posted: Sep 06, 2018 12:01 AM
Share   Tweet
The opinions expressed by columnists are their own and do not necessarily represent the views of Townhall.com. 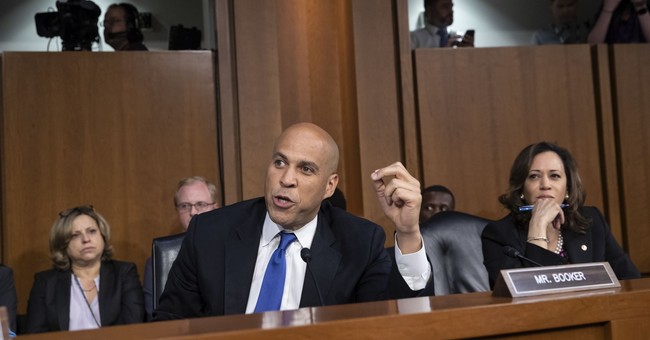 I feel like I lost a bet, a bet I would have won a lot of money from had I won, but since I lost I had to watch the opening statements at the confirmation hearing for Judge Brett Kavanaugh to sit on the Supreme Court. There’s a term for it, that I will clean up here – feces show.

I’m writing this in the moment, Tuesday afternoon, and I’m disgusted. That disgust will color my commentary, though editors will limit my language.

Democrats are vile, disgusting people. There is no lie they won’t tell, no person they won’t smear, to advance their agenda.

Judge Kavanaugh had to take it, such is the role of the nominee in a Senate confirmation hearing. But how sweet would it have been if he’d simply put his head down and taken a nap or pulled out his phone and started playing Angry Birds while this or that blowhard peacocked around for the cameras?

How awesome would it have been if each member of the mutant mob who screamed out from the back of the room were tazed into unconsciously soiling themselves before being dragged out of the room like a Kennedy at a strip club?

It was simultaneously hilarious and sad to watch senators whine and complain about not having enough time to review Kavanaugh’s record while knowing they’ve almost uniformly declared they will vote against him before they learned how to properly pronounce his name.

Cory Booker, always sounding on the verge of tears, recounted a conversation he allegedly had with an Illinois farmer. I use the word “allegedly” because years ago Booker created a character named “T-Bone” who he used to make political points throughout his career, only admitting this “person” never existed when the media finally got around to doing their jobs and tried to track him down for comment.

Richard Blumenthal took a break from lying about having served in Vietnam to wet himself over not having enough time to review documents from Kavanaugh. As a former Senate staffer I can assure you, they have large staffs and can easily get through a lot of pages of non-legislation pretty quickly and easily especially when much of those documents are innocuous emails. Maybe Blumenthal was too busy polishing his non-existent medals to bother.

Kamala Harris couldn’t wait a full minute into the hearing before starting to whine about how the hearing shouldn’t be happening. When it was finally her actual turn to speak, she droned on in what can only be viewed as a campaign speech for her 2020 presidential bid. She got so many basic facts wrong and lied so thoroughly that she has to be considered a frontrunner for Democrats’ nomination.

What’s worse for Harris, and a deeper look into her flawed and rotting character, during the lunch break she tweeted a lie told by the father of a Parkland shooting victim. Fred Guttenberg tweeted, “Just walked up to Judge Kavanaugh as morning session ended.  Put out my hand to introduce myself as Jaime Guttenberg's dad.  He pulled his hand back, turned his back to me and walked away.   I guess he did not want to deal with the reality of gun violence.”

There’s no way in the world Judge Kavanaugh could have known who Guttenberg was, just that a strange man in a hostile room came rushing up to him. Security immediately stepped in and moved the judge away, as they should have. The mood in the room was so hostile the Kavanaugh's children had to leave, so some random guy approaching him should have been viewed as a possible threat. Plus, no matter what Hell someone went through, they are not instilled with special rights of access to Supreme Court nominees.

It was also incredibly quick, which is why liberal “journalists” used still photos from the encounter and not the video. Harris knew this, but it didn’t matter.

This was clearly a publicity stunt, likely funded or conceived by a left-wing activist group, and telegraphed by Guttenburg himself when he tweeted “I will be at the Kavanaugh hearings and I hope to play a role in ensuring that this man does not become the next Supreme Court Justice” the day before his stunt. He was immediately booked on CNN and MSNBC because they're scum, and I mean that in the nicest possible way…

The whole encounter was horribly dishonest, which is why Senator Harris saw it as an opportunity to appeal to the left’s vile base. “If Kavanaugh won’t even give him a handshake, how can we believe he would give gun violence victims a fair shake in court?” she tweeted during the break.

It was political theater and a fraud. In other words it was exactly who the Democrats are.

The whole show exposed liberals as unserious about their jobs or the truth. They will do, say, or exploit anything and anyone to regain their hold on power. No lie is too big, no opportunity to manipulate too small – and that makes them incredibly dangerous.

November is coming, and the exploitations and/or lies of the left will be ignored and validated by the media. Nothing, no standard of decency or decorum, will stop this pursuit. They have nothing to offer except hatred and anger, and that’s selling pretty well with their base this year.

How else, aside from a series of serious closed-head injuries, to explain leftist claims that White House lawyer Zina Bash was “flashing a white power symbol” during the hearing? Bash, by the way, is half Mexican, half Jewish and her family barely survived the Holocaust, but leftists will never, ever let that, or anything, stand in the way of their objective. They are disgusting.

Liberals have one goal: control. What comes after that will be even more dangerous than what they’ll do to get it. God help us all if they succeed.

PS: If you’d like to know how liberals manipulate the American people in ways you likely haven’t realized, pick up a copy of my book, “Outrage, INC: How the Liberal Mob Ruined Science, Journalism, and Hollywood.” It explains the why and how of what the left does in order to keep people feeling (usually anger and fear) to prevent them from thinking and acting rationally, and it does so with a lot of humor. Don’t take my word for it, take the words of Mark Levin, Ann Coulter, David Limbaugh, Dana Loesch, Dan Bongino, Michelle Malkin, Ben Shapiro, Kurt Schlichter, and countless others. Obviously, I have an interest in selling you a copy of the book, but they don’t. Yet they’ve all endorsed it. And, for reasons I don’t understand but am eternally grateful for, people are still buying it. You will love it, learn from it, and laugh throughout it, trust me. Thanks!