Derek Hunter
|
Posted: Oct 29, 2017 12:01 AM
Share   Tweet
The opinions expressed by columnists are their own and do not necessarily represent the views of Townhall.com. 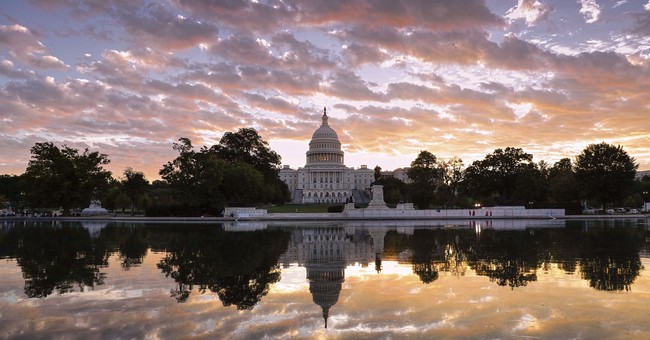 Whether it’s writing or doing radio, one thing you could always count on was the occasional slow news day or week. A couple of times per year, usually in August or around the holidays, Congress would go on recess and everyone’s attention would shift to more personal matters, such as spending time with family.

Since November 2016, that concept has gone the way of the Dodo.

There’s barely been a day, let alone a week, where someone in politics or the media weren’t declaring the end of something – be it civility, the Republic, or anything in between.

The moment Donald Trump was elected, all hopes were dashed and full panic mode set in for Hollywood and those with press credentials. Since then it has been Chicken Little on meth – one freak-out after another. Few things have been handled so poorly by so many adults.

Many of the new things they’ve freaked out over have directly contradicted something they’d previously freaked out about. Repealing Obamacare will hurt people, or enforcing Obamacare as written will hurt people. President Trump is either the most incompetent person to ever walk upright or the most maniacal monster ever to plot the end of western civilization. It just depends on the day.

It wasn’t that long ago that meeting with Russians who said they had dirt on Hillary Clinton (she didn’t) was akin to the Rosenbergs giving the Soviet Union our nuclear secrets. Now that it turns out the Clinton campaign and the Democratic National Committee paid millions of dollars for a former British spy to collaborate with the Russians to get dirt on Trump, it’s simply normal opposition research. Nothing to see here, move along.

To say the narrative liberals paint on a regular basis can turn on a dime understates their U-turn abilities. It’s more like a dot of a fine-tipped pen brushed gently against a clean sheet of paper.

CNN was clutching its pearls this week over a report one of the data contractors working for the Trump campaign reached out to Julian Assange of Wikileaks to see if he had Hillary’s 33,000 deleted emails. They were outraged over “attempted collusion” with the man accused of being a Russian stooge. Less interesting to CNN is the DNC and Clinton campaign paying Christopher Steele millions more dollars to write up gossip and rumors supplied by Russian government officials and present it as fact.

All media outlets use the Steele dossier like it’s their Bible. None seemed ever to have any concern over the wiping and destruction of Clinton’s server nor any curiosity over why she might go to such an extreme. Neither is good, but only one is potentially criminal.

The Harvey Weinstein story has turned into a mini-“I am Spartacus” moment, with women claiming #MeToo and coming out of the woodwork to expose others in Hollywood and in the media of being everything they claim to decry. Good for them. Only, since they’re accusing Democrats, there’s little appetite for their story.

We are, of course, hearing only from the ones who fought back, resisted and refused. Some, presumably, said yes in the hope of furthering their careers. How many of either camp exist is anyone’s guess, but the names of Weinstein, Affleck, Halperin and all the rest are tainted, at least for the moment. Which is why this story gets just enough attention so the left can pretend they aren’t ignoring it.

But there’s always another shiny object out there.

Every leak is the end of the world. Every daily press briefing is a spectacle or disaster. Impeachment is just around the corner.

We must be on a long, long block because we aren’t anywhere near that corner. Sarah Huckabee Sanders hasn’t had a nervous breakdown, and the world is still going strong.

None of that has changed the narrative because the narrative is chosen, it’s set. Donald Trump is a corrupt monster who will lead us on the path to ruin; the only thing remaining is for someone to approve it. For being so inept, he sure hasn’t left any evidence.

While the media praises retiring Republicans – people they’ve largely held in contempt until they spoke out against the president – take a moment to find out about the other things they aren’t telling you. There is news out there, just not on cable television. Apparently that doesn’t rate as highly as crying wolf.

The rest of the country is simply trying to go about our daily lives, and we’re trying to live those lives as if they don’t revolve around what anyone inside the Beltway says. The last year has made that difficult, with the outrage machine set to 11. Going forward, one thing is for sure: There will never be a dull moment…even when you want one.