Derek Hunter
|
Posted: Oct 06, 2016 12:01 AM
Share   Tweet
The opinions expressed by columnists are their own and do not necessarily represent the views of Townhall.com. 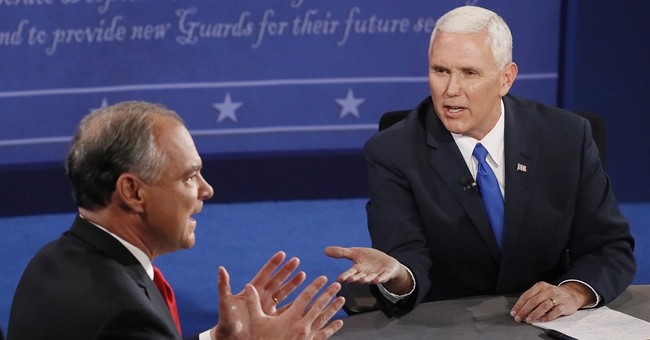 It’s over. The vice presidential debate has ended. But you wouldn’t know it because Sen. Tim Kaine is still talking over everyone.

Yes, it’s the “junior prom,” but it does matter. One of these two men will be a heartbeat from the presidency come January, whether you like it or not. Given Hillary Clinton’s mysterious health issues, that's nothing to sniff at on the Democratic side.

One of these men – Pence – will have the opportunity to advise a president on such important issues as the economy and national security. The other probably will be outside the room pressing his ear to a glass held against the door.

If you think there’s any way Hillary would ever trust Kaine, or anyone not already inside her protective circle of unindicted co-conspirators, with anything important or even remotely resembling trust you have not been paying attention. Having seen Kaine “debate” for 90 minutes, I can see why she might add an extra lock on that door.

For all the talk of Trump’s erratic statements, the senator from Virginia made Donald look like a rock. Kaine acted like the guy no one will admit to having invited to the party.

I’m not sure who decided to send Kaine to the School for Being an Insufferable Jerk in Debates, and I’m glad Hillary hasn’t made it taxpayer funded yet. But whoever paid for it sure got their money’s worth. From the opening question till the end of the night, Kaine demonstrated the self-control of a meth head.

How many times can one man interrupt another in 90 minutes? Turns out the answer is 70. Though, in fairness to Sir Tweeks-A-Lot, he could have done more if the moderator had not stepped in and done it herself so many times.

Honestly, I’d never heard of Elaine Quijano from CBS News before Tuesday night. In fairness to Quijano, I’m not 85, so I don’t watch CBS.

Still, she was a terrible debate moderator. The questions, as much as you can call them that, were incredibly biased. The toughest question for Kaine was about the Russian “reset” failure by Hillary. Kaine blamed it on Putin, as if he’d duped the smartest woman to ever exist. If Hillary is so brilliant at foreign policy, how was she taken for a ride by Putin?

Kaine followed the Clinton campaign playbook – respond to a question with a platitude, an empty promise and an attack on Trump.

Hillary Clinton thinking Tim Kaine is a good choice for a running mate is like her choosing some mid-level staffer to set up a non-secure secret server in her house to handle classified material, thereby threatening national security. I mean, who would do something that crazy and reckless, right? Wait, never mind.

The night wasn’t a complete bust. While Kaine was grinding his teeth and hoping his high would last till the end of the debate, Pence was actually – dare I say it – presidential. A first for this election.

Mike Pence’s performance, had it been delivered by Trump in the first debate, would’ve put this race nearly out of reach. It’s a sad reminder that nearly anyone in the GOP field would have this race in the bag. Hillary is that awful.

As it stands, if Trump watched and is willing to learn from Tuesday night, we could be back to having a race on our hands. Guess we’ll find out Sunday night.

It was a hands-down victory for Pence. The Clinton campaign has to be happy it can ship Kaine back to small diners and high-dollar fundraisers and out of the public eye. If you plan to attend one, hide the bath salts. Better safe than sorry.

Pence is an impressive man with an impressive resume and grasp of policy, both the little and big picture. More importantly, he has a comfort level in talking about issues and policy that no one else in this race does. Expect the media to ignore him as much as possible going forward.