Derek Hunter
|
Posted: Sep 11, 2016 12:01 AM
Share   Tweet
The opinions expressed by columnists are their own and do not necessarily represent the views of Townhall.com. 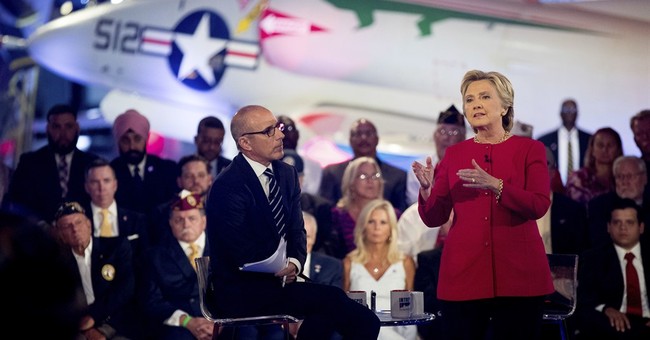 We’ve spent eight years hearing how awful we are for not praising President Obama’s failures.

Have a problem with anemic economic growth? You’re a bigot. Not a fan of accumulating more debt than every other president combined? You’re a Klansman. Not a fan of unfettered, anonymous immigration or providing funding, housing and work to unvetted refugees from terrorist-infested parts of the world? You’re a xenophobe. Think adding millions upon millions of Americans to the welfare rolls shouldn’t be celebrated? You’re blowing the “dog whistle” of racism.

During the Obama years, almost every American has been called an “ist” or “phobe” of some sort because the alternative would’ve been to deal with the substance of the critiques. That’s something Democrats don’t want and can’t handle. Their unquestioned failures haven’t destroyed them as a party only because they’ve been shielded by fellow travelers in the media. When an administration can create the phrase “jobs saved or created” to spin a trillion-dollar stimulus scam without being laughed out of the White House, journalism is dead.

Journalism is dead, but there are still people using that title who do not come close to living up to it. And those people still are watched by otherwise-disengaged Americans too busy surviving to pay close enough attention to realize the emperor has no clothes. They hear a tailored suit-wearing talking head read 22 minutes of “news” every once in a while, or read some slanted spin by a “reporter” with impressive-sounding awards and have no reason to question them.

That’s how the Democratic Party survives.

But Hillary Clinton is such an awful candidate and corrupt human being, the media can spin only so much to keep people in the dark. As the curtain is pulled back even further, the stench of desperation is emerging.

The media has been forced to move beyond standard coverage of Clinton’s boilerplate stump speeches and acknowledge the realities surrounding her. The Foundation, the insane amounts of money, the access sold, the favors traded, the trust betrayed. They do their best to undercut the stories – keeping them short on TV and burying them deep in the paper – but people have heard enough to connect the dots from Clinton’s nearly 40 years in public life and to read between the lines themselves.

It’s what’s kept this race close, and it’s what has the media worried.

And it’s what explains the new tactic ushered in this week – attacking those who expose her as a warning to those who might in the future.

Matt Lauer made the mistake of asking thus-far unanswered questions of Hillary at the “Commander In Chief Forum” on NBC News. He compounded his media transgression by interrupting her filibustering of those questions to point out her lack of clarity. For this random act of journalistic integrity, Lauer was smeared repeatedly, including being called “loser” two days in a row by none other than the New York Times.

The message to moderators of future debates was clear: Go easy on Hillary, or they will come after you.

Compounding matters, since there are so many fronts on which Hillary is corrupt and therefore vulnerable, information continues to come out about how she compromised national security to avoid accountability. As each drip creates a ripple washing across more and more people’s consciousness, the story must be squashed. Enter the Washington Post.

In an editorial, the paper that exposed Watergate after months of continual digging demanded all shovels be put away when it comes to Hillary’s secret private server. Saying the “story is out of control,” the Post pre-emptively excoriated those who who’d question her ever-evolving tale.

She’s the victim, the Post would have you believe. Hillary’s “emails have endured much more scrutiny than an ordinary person’s would have,” the editorial stated. So no more stories.

But with Hillary there’s always more, so every angle must be covered.

After going the gestation period for a human being without holding a press conference, she took a few questions this week. Proving just how worthless the press is, and how afraid Hillary is, the first question was whether she’s the victim of sexism.

This mantra was picked up by other group-think “journalists” and passed off as original thought. They’ll probably all win Pulitzers for it.

The message has become clear: Protect Hillary. Accuse whoever may stand in her way of being whatever kind of “ist” or “phobe” is handy at any given moment, and do whatever it takes to get her over the finish line. She’s such an awful candidate she can’t win without it, even against someone as distrusted as Donald Trump.

That Trump has kept this a margin-of-error race against the full force of the corporate media machine backing Hillary is a testament to just how awful she is. No amount of spin will be able to undo 24 years of knowing Hillary Clinton, and no lie will make her seem honest.

Debate moderators likely will heed their fellow travelers’ warnings to go easy. But it’s just a matter of what comes first: enough voters in battleground states realizing they’ve been lied to or Nov. 8.