The Week In Stupid

Derek Hunter
|
Posted: Mar 06, 2016 12:01 AM
Share   Tweet
The opinions expressed by columnists are their own and do not necessarily represent the views of Townhall.com. 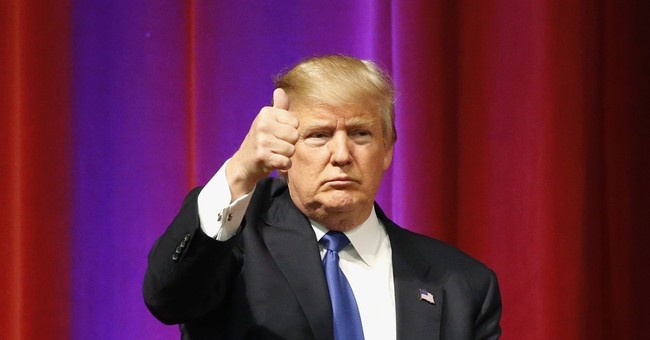 Some weeks are eventful, others boring. But only a few in the political world are like the one that just ended – full of stupid.

It started with Donald Trump taking a break – not from the campaign trail but from condemning David Duke and Ku Klux Klan. He’d done it plenty of times in the past, yet for some reason he couldn’t bring himself to do it Sunday morning with Jake Tapper.

After repeating the question back to Tapper, Trump passed, fearing the prospect of condemning groups that might not deserve it. All Tapper said to identify them was that they were white supremacist groups. They could be running soup kitchens, building playgrounds or helping the elderly, Trump must have thought. Who cares? They are white supremacists. Just condemn them.

Fox News host and Trump lapdog Sean Hannity exasperatedly asked, “How many times does he (Trump) have to condemn David Duke and the KKK?” The answer is simple: EVERY DAMN TIME!

It’s not a hard rule to follow: Racism is bad. Doesn’t matter where it is, or who is doing it. It’s evil. No one is confused over what white supremacist groups such as the KKK stand for. They aren’t known for burning crosses and terrorizing people while growing community gardens and holding charity spaghetti dinners. And even if they did, THEY’RE STILL THE KU KLUX KLAN!

This isn’t difficult…or at least shouldn’t be.

It also shouldn’t be difficult to tell the truth, unless it will incriminate you. Hillary Clinton is relearning this.

Bryan Pagliano, the ex-Hillary staffer who set up Hillary’s secret server, had exercised his Fifth Amendment right against self-incrimination in the investigation into why she bypassed security measures and stored her server with Harry Potter under the stairs. The creator of the “Harry Potter server” has been granted immunity by the Department of Justice, which means he now must tell his story and answer their questions. What he says cannot be held against him…as long as it’s the truth.

Getting the truth from Clinton associates has proven problematic in the past, but Pagliano has to tell it to stay out of prison. Even if he confesses to personally conceiving of the idea and lying to Hillary about the security, she should have known better. She was the boss and the one with the responsibility.

The coming months offer the potential for much fun.

We can all now say we lived in a time when penis jokes were part of a presidential debate. Although not exactly a “There you go again” or “You’re no Jack Kennedy” moment, an exchange between Trump and Marco Rubio led to what will become our next great debate quote; the “I guarantee you there's no problem. I guarantee.”

Just when you thought a race featuring a leading candidate under multiple federal investigations and another who’s an avowed socialist couldn’t sink any deeper into the weird… the Showtime reality series documenting this race is called “The Circus.” Perhaps it should be renamed “Keeping Up With Candidateshians.”

I’m not yet a parent, so d-ck jokes on TV don’t bother me. What does is the country becoming a Dean Martin Celebrity Roast crossed with a prolonged season of Survivor. Not because the content offends me, but because the last person standing is going to be our next president.

In 2016, American voters may be forced to choose between Bonnie Parker, Leon Trotsky or Triumph the Insult Comic Dog.

There’s something to be said for Bonnie and Trotsky. They’re awful, but at least you know where you stand with either of them. Triumph, on the other hand, is a wild card who can treat you like a fire hydrant for simply asking a question.

Ultimately the media is to blame for the wide acceptance of these stupidities. People only know what they are told. In 2012 they turned a good and decent man into someone who burned money while his employees’ wives died; tortured his dog and had elevators in his home for his cars. Think what you will of his politics and polices, and they had their shortcomings, but they made Mitt Romney into a caricature of a human being.

It wasn’t the first time, and it won’t be the last. But this time, the media lost our confidence. Remember the mocking tone of their reporting on Romney’s correctly citing Russia as our No.1 geopolitical foe? Now, they let one of the leading candidates for president call in whenever he wants and be placed immediately on the air. Meanwhile, they outsource investigative reporting to interested parties. It’s not journalists unearthing secrets these days; it’s advocacy groups armed with Freedom of Information Act requests.

Yes, this past week has been a special kind of stupid, but so has the whole 2016 race. It started a long time ago, and November or not, there is no end in sight.