Derek Hunter
|
Posted: Feb 21, 2016 12:01 AM
Share   Tweet
The opinions expressed by columnists are their own and do not necessarily represent the views of Townhall.com. 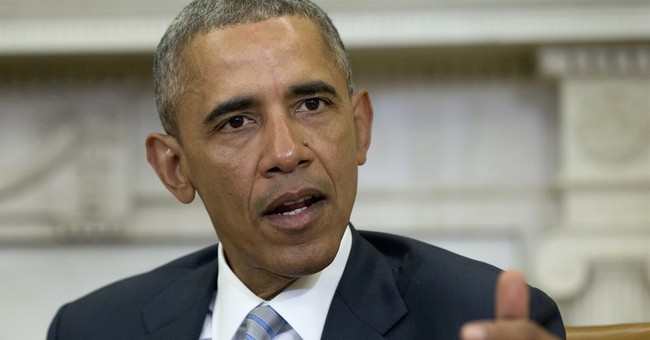 When President Bill Clinton’s affair with intern Monica Lewinsky was exposed, it was a new low for the office of president. It wasn’t the first affair by a president (or Clinton), not by a long shot. But the fact it was with an intern and he committed perjury behind it demeaned the office in a way that hadn’t been done before.

It turned the 2000 election partially into a referendum on restoring the dignity, or at least the veneer of it, to the office. Thanks to the words and deeds of Barack Obama, that dignity needs to be restored yet again.

Disagreements over policy are common, and natural, really. And presidents have used language they, perhaps, would like to have back in hindsight. But their actions, at least their public actions, generally have been presidential. No more.

With President Obama’s public refusal to attend the funeral service for Supreme Court Justice Antonin Scalia, he demeans the office in a way that transcends politics and exposes him as a small man who never grew into his job.

There are a lot of perks when you’re president. Your every whim is catered to – a kitchen staff on call, butlers, Air Force One, access to the rich, powerful and famous, living in the White House, and so on.

With that lifestyle comes certain responsibilities. The constitutional ones are obvious and enumerated. Beyond those are duties inherent in the office which, although sometimes unpleasant, are no less important.

The most important intrinsic duty of the president is to represent the people of the United States, not in policy but in person. The president can’t get drunk and stumble around in public, for example. That would be universally panned as beneath the dignity of the office.

Yet, other events, perhaps undignified on the surface, are simply tradition and “part of the job.” Every Thanksgiving the president holds a press conference, delivers a pointless speech, pardons a couple of turkeys and sends them off to live the rest of their lives on a farm somewhere. There are about a million things any president would rather be doing. But that has become part of the job, so they have to do it.

Another thing the president must do is show up at events that matter, that are markers in history, and to represent the American people because we can’t attend.

The president represents us at important, and sometimes only symbolic, events.

President Obama shows up only when he wants up, only when it matters to him. The funeral of Nelson Mandela – he was there. The funeral of Margaret Thatcher – he couldn’t be bothered. Both were important figures in world history; only one was crucial in winning the Cold War.

The president has no interest in fighting terrorism beyond what he must do. Therefore, after the attack on the offices of Charlie Hebdo, when world leaders united and marched in solidarity to honor the victims, Barack Obama was uninterested.

A stalwart conservative justice of the Supreme Court dies in office, and even though every time in American history a sitting Supreme Court justice died in office the president attended the funeral, Barack Obama can’t be bothered. He’s sending the vice president.

This petty public refusal has lowered the bar of the Civil Society.

President Obama did not like Antonin Scalia because President Obama doesn’t like anyone who disagrees with him. Considering how rarely he bothers speaking with members of Congress, he doesn’t even seem to like people who do agree with him. He has his world and his worldview and nothing, not even duty, is going to penetrate that bubble.

A man who gets bored during the raid to kill Osama bin Laden to the point he leaves the room to play cards with an employee has no interest in the dignity of the office.

The man could not bring himself to show up to the funeral of a sitting Supreme Court Justice. Let that sink in. Having his spokesman state publicly he wouldn’t rule out golfing instead exposed the man in the office as, yet again, as demeaning the office.

That Press Secretary Josh Earnest tweeted Friday the president would be working with staff on finding a replacement for Scalia this weekend rather than attending his funeral is just the latest in a long line of examples showing President Obama acting anything but presidential.

Some presidents have risen to occasions and grown in office, Barack Obama has had ample occasions, and on far too many of them he shrank.