It Just Got Real

Derek Hunter
|
Posted: Feb 18, 2016 12:01 AM
Share   Tweet
The opinions expressed by columnists are their own and do not necessarily represent the views of Townhall.com. 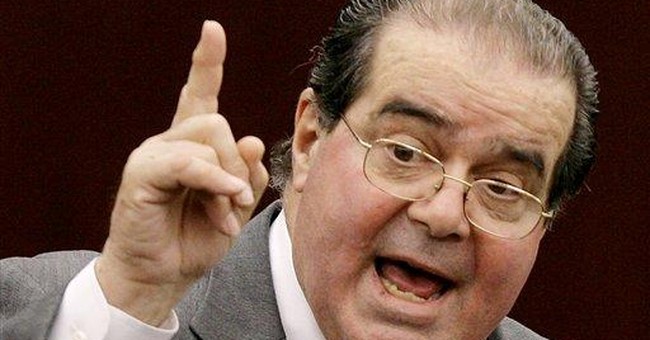 News of the death of Antonin Scalia washed across the political landscape like few things could. Most of us aspire to cause a ripple in the pond of life; Scalia was a tidal wave. His service on the Supreme Court ranks among the most important by an American in defense of liberty and the Constitution. His passing also adds a new dimension to the fall election for which no one, not candidates or the public, was prepared.

The next president presumably was going to be called on to fill at least one vacancy on the High Court, as three members are in their 80s. Scalia’s death at 79 was unexpected and sudden. Deaths of Supreme Court justices in office are rare, in an election year even more so. The passing of one so significant, on a court so divided, with a president holding an antithetical view of the Constitution is unprecedented.

The Supreme Court is in a unique place in its history. The Constitution, the document it is supposed to use to settle cases, is more of an afterthought to too many members. Most of their votes are well known before a case is even argued.

Liberal justices are reliable votes for the expansion of government and whatever the Democratic Party side happens to want. They are willing to use foreign or even made-up law to bolster their cases. Conservatives generally oppose these measures, although conservatives, including Scalia, have crossed to the left and ruled against their personal ideology when the Constitution demanded it.

We’ve long been a nation at the whim of one man – Justice Anthony Kennedy – seen as the “swing vote” between expansion of government power and the Constitution. That was always folly and nothing like the Founding Fathers envisioned the court to be.

If Barak Obama appoints Justice Scalia’s replacement, the balance will shift from the individual and the Constitution to an ever-expanding government and the progressive agenda in a way that will complete Obama’s vision to “fundamentally transform the United States of America.”

Although not perfect, since nothing made by man can be, the United States is not in need of “fundamental transformation.” Our system of government was deliberately set up to make change, particularly on the federal level, extremely difficult.

The Constitution, as written, is a set of limits on what the federal government can do. For it to do more, that “more” must conform with the limited powers expressly granted in that document. If it seeks to go beyond that, it must be amended through an arduous process. This wasn’t by accident.

The Founding Fathers didn’t want a powerful central government. They’d just rebelled against that. They wanted the power to rest with the states and individuals, as unambiguously stated in the 9th and 10th amendments.

To expand government’s reach, the bar was set high – two-thirds of both houses of Congress and three-quarters of the states or a Convention of States. That was deliberate, to ensure it was, in fact, what the people wanted.

Now there’s no reason to amend the Constitution; you need only to have five unelected Supreme Court justices on your side.

Scalia was one of the best, most articulate defenders against judicial tyranny we’ve ever had. We aren’t to that point yet, but on many issues – particularly the Second Amendment and the unequivocal right of an individual to defend themselves – we are one vote away from the entirety of our history being overturned because some people don’t like it.

Republicans must hold the line against President Obama replacing Justice Scalia. As we’ve seen since the news broke, Democrats are terrified at the prospect of the American people having their voice heard on the issue of who should possibly tip the balance of power from the people to the government through a presidential election.

And it should not.

The court can function one member short; it’s done so many times before. If the Democrats win in November and, God forbid, retake the Senate as well, so be it. As disastrous as that would be, it would be a reflection of the will of the people. Same goes for if the Republicans nominate and win with someone who doesn’t have strong conservative principles.

In addition to this loss, other justices will step down in the coming years. The court and the nation will change.

How it changes, and when, should be a choice made by the American people. The Scalia seat should remain vacant until the people speak.

No one can replace Scalia, but someone else will sit in his seat. And the nation he so loved will continue. Depending on how Senate Republicans act and how the American people vote, the nation could be changed as much by his death as it was by his life. We must be allowed to have our say, and conservatives must speak loudly and clearly.