Derek Hunter
|
Posted: Feb 04, 2016 12:01 AM
Share   Tweet
The opinions expressed by columnists are their own and do not necessarily represent the views of Townhall.com. 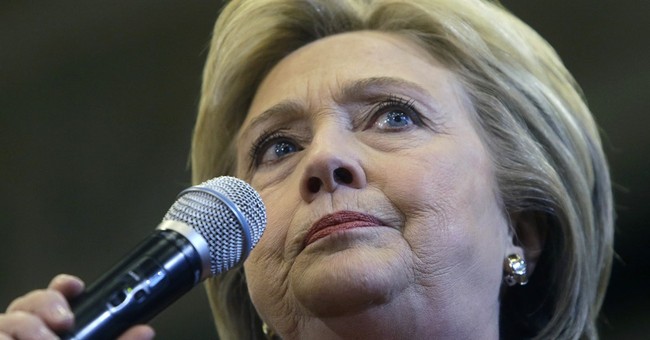 The results are in, and Iowa has spoken.

While the results are in, the postmortem continues. And therein lie the crazies.

Reports had Hillary Clinton quite upset she didn’t decisively win, so much so she canceled a scheduled rope line photo-op and speeches by her husband and daughter after her non-victory speech.

Can’t really blame her. This was supposed to be her year. It’s like a bad movie where the princess is about to get the crown, and her separated-at-birth slightly older twin brother shows up at the start of the ceremony to screw up everything. Off with his head!

Hillary is about to go negative on crazy Uncle Bernie. She has to.

When presented with a fair fight or an all-out political nuclear war, the Clintons always push the button. Bernie must be destroyed because he can beat her.

Don’t get me wrong. There isn’t a dime’s worth of difference between the two: Both want free college, higher taxes, more spending, bigger government, less personal responsibility, etc., etc.

The difference is Hillary has speechwriters twisting those things into rosy, horribly delivered lectures, and Bernie speaks from the heart like a homeless man yelling at an empty cookie jar. But the Democratic Party has turned into the home of homeless people yelling at cookie jars, so he’s a threat.

Hillary’s “firewall” is South Carolina, at least according to conventional wisdom. But her real defense is the black vote, which happens to be large in the South. It’s not all that clear why an elderly, rich white woman who hasn’t driven a car in more than 20 years appeals to anyone, let alone black voters who’ve endured decades of promises of better times always just over the horizon from Democrats.

But very little in left-wing politics makes sense. It’s a testament to the power of manipulation and fear, and no one manipulates and instills fear like a Clinton.

Bernie, on the other hand, won Iowa. The cookie jar at which he was yelling had some cookies in it – Hillary’s cookies – and he ate them all. The delegate count is irrelevant; having more delegates after Iowa is like winning the first mile of a marathon. But Bernie showed Hillary is mortal, something many leftists didn’t believe, and he actually inspires people. Crazy leftist people, but people nonetheless.

The elderly, rich white woman lost big among young voters to the older, poorer guy. Bernie is an old man yelling at a cookie jar, but Hillary is an underachieving kindergarten teacher yelling at her students because they don’t understand quantum physics. Neither does she, but she knows the words, and that’s enough for her to feel superior. Her condescending cadence is so off-putting that listening to her for extended periods should be a competitive sport.

Her supporters regularly assure the public she’s incredibly warm and sweet in person. But she lives her life in a protective bubble, so no one ever sees this alleged side. And lets be honest: The Clintons and their supporters don’t actually have a backlog of “take my word for it” trust built up with the American people. If Bernie trounces her in New Hampshire, as he should, a lot of Democrats will give him a second – a first, actually – look in other states.

There’s no reason Sanders shouldn’t do well with black voters. Unlike Hillary, Bernie actually was involved in the civil rights fight. He stood up to racist Democrats when he was younger, getting arrested protesting housing discrimination.

If Sanders starts running like he wants to win rather than just make a point, he stands a chance of at least dragging this race out for months. Whatever happens, it’ll be fun to watch.

On the Republican side, those old, white racists must’ve missed a memo because they voted for two Hispanics and a black guy in large numbers. Sure, they voted for a billionaire too, but they’re not very good at racism.

Yet some are extremely good at complaining.

There’s little point in highlighting all of it, but needless to say watching Dr. Ben Carson whine that his supporters were “tricked” into thinking he was dropping out of the race because Ted Cruz supporters shared a CNN story alleging as much is an insult to Carson supporters and beneath the candidate. Publicizing a news story hardly constitutes a “dirty trick.”

The mystery remains how a man running for president feels the need to take a day off to get “a fresh set of clothes” at that particular moment.

Wardrobe malfunctions aside, nothing on the Republican side rivaled the meltdown of Donald Trump supporters.

Surprisingly, Trump’s concession speech was his most humble and human moment of the campaign. His devotees, on the other hand, could not contain their dismay over the shine wearing off his inevitable veneer.

On Fox, Andrea Tantaros could not contain her disgust with National Review editor Rich Lowry over Trump’s loss. After National Review came out against Trump, Tantaros invoked the dreaded “GOP establishment” card, a formerly meaningful phrase that now serves as a substitute for a coherent point for pundits.

Asked what it means, Tantaros responded, “It means the typical Beltway infrastructure in the past.” When reminded of Bob Dole’s support for Trump and how someone so “establishment” could be pro-Trump if he’s “anti-establishment,” she replied, “Because I used to be, too — because I used to be too, Rich, and we’re tired of losing elections. We want a nationalist that’s actually going to buck the party.”

Tantaros spent a brief period as a low-level staffer in the House of Representatives; not exactly the upper-echelon of the “establishment.”

Upset as Trump’s enthusiasts may be, rural Iowans voting for others is hardly a reason to wrap your head in tinfoil, hide under a desk and strike out at others. Yet that’s how many spent Wednesday – like they’d just seen Superman bleed.

That’s how Hillary supporters responded too, and this was after one day of voting. There are dozens more to come.

There’s nothing wrong with believing in a candidate. It’s important to care. Losing touch with reality, though, is not so good. Becoming unhinged over the Iowa caucus results when your name or your job wasn’t on the ballot is unhealthy. The world already has one candidate yelling at cookie jars; it doesn’t need more people thinking the cookie jar is against them.